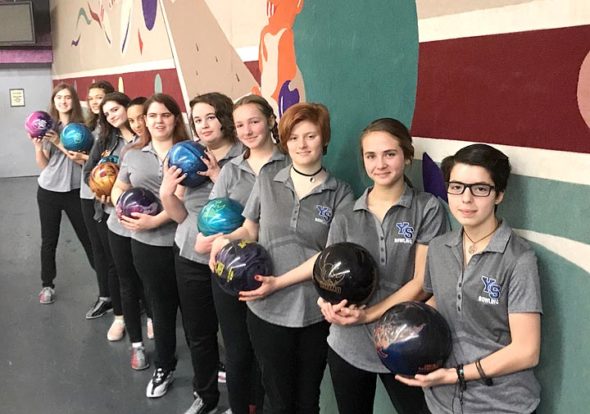 In its third year at Yellow Springs High School, the bowling team is continuing to make progress, according to Coach Matt Cole this week.

This year’s team features 30 bowlers, up from 22 last year and 13 in its initial season. Though the team has yet to win a match this year, its bowlers are steadily improving, Cole said.

“Everybody is learning bowling. They are all progressing,” Cole said. “And some of our student athletes are doing fantastically.”

On the girls team, newcomers Carina Basora, Kira Hendrickson, Carley Blakey, Sophia Lawson and Kiera Fogarty are all coming along well, especially since they had only marginal experience with bowling prior to joining the team, the coach said.

Hendrickson, for instance, bowled a 157 twice last week, an impressive feat for a brand new bowler, Cole said. Basora, meanwhile, bowled two games in the 140s last week, and Lawson has scored over 150.

Isaac Schultz, Rebecca Spencer, Eric Hansen, Sam Neilsen, Michael Vickers, Ian Hawkin and Davin Bush round out the squad and are all playing well and continuing to improve, Cole said. Recently, in practice, Bush used his two-handed technique to bowl seven straight strikes to start out a game, finishing with a 211.

“It was absolutely shocking,” Cole said of the game.

A former international tournament bowler who most recently bowled a perfect game in December, Cole said coaching the team has been a joy.

“It’s such a joy to be a bowler for 40-plus years of my life and to transfer this intimate knowledge of this sport to these teenagers and watch them lap it up and do well at it and be excited about it,” he said.

Bowling, which Cole considers a “metaphor for life,” offers many life lessons for the youth, he added.

“When you get up there and it’s your turn to bowl, you focus on the best you can do in that moment. Then, it’s done. It’s like life,” Cole said. “You keep a good attitude and live the moment.”

Over the weekend, the YSHS Bulldog swim team braved the weather to compete in the Coaches Classic, billed as the largest swim meet in Ohio and conducted at several sites in Southwestern Ohio on Saturday and Sunday.

The girls team impressed with top 10 individual finishes from everyone who competed — Devyn Deal, Natalie Galarza, Jude Meekin, Eden Spriggs and Sara Zendlovitz — with two fourth-place finishes in the 200 and 400 free relays.

Weather hit the boys team harder, as half attended Saturday and half Sunday. Despite that, top 10 finishes were had by Trystan Burch, William Gregor, Tariq Muhammad and David Walker.

The Bulldogs return to action for their final regular season matchup on Friday evening, Jan. 25, at 7 p.m., at the Robinson YMCA in Troy.