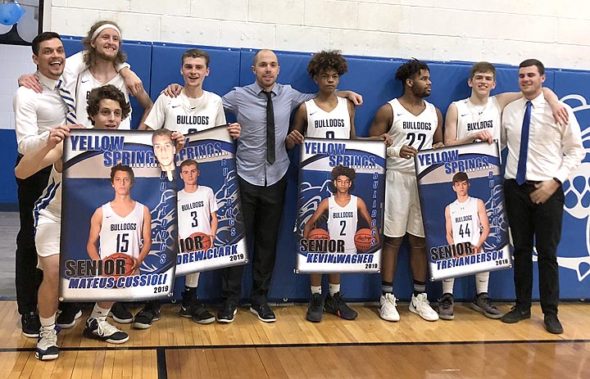 High finish to season at Districts

Representing the boys in the morning, Sectional Champion David Walker placed 26th in both the 100 freestyle and 200 individual medley. He was the first boys team participant in Districts since Aman Ngqakayi in 2016.

Representing the girls in the evening, Metro Buckeye Conference Swimmer of the Year Eden Spriggs placed 20th in the 100 butterfly, her strongest ever in the event. In addition, the 400 freestyle relay of Spriggs, Sara Zendlovitz, Jude Meekin and Natalie Galarza placed 21st. This was the fourth year in a row YSHS qualified for that relay event.

Last Saturday, the seniors were recognized at YSHS.  Eight of the 11 swimmers this season were seniors, five of whom swam all four years of high school.  Those five — Meekin, Spriggs, Zendlovitz, Harper Mesure and Walker — were named captains for the 2018–19 season. This class was uncharacteristically large and dedicated for a school the size of YSHS, and have had many accomplishments. These include: three-time Girls Swimming Conference Champions (2016–2018), Combined Conference Champions (2016), two conference records and nearly 20 first team all conference honors. They hope to leave an imprint on the school, and that those after them continue on the unprecedented success they brought to the program.

The entire team will be recognized for a final time on Thursday, Feb. 28, at the YSHS Winter Sports Night. The event will be held in the YSHS gym at 6 p.m.

The YSHS bowling season ended at sectional last week. At Marian Lanes on Wednesday, Feb. 13, the girls team did not place in the finals, but players bowled consistently, according to Coach Matt Cole. The boys team, in competition on Thursday, Feb. 14, also did not place.

On Tuesday, Feb. 12, the Bulldogs boys basketball teams traveled to the charged atmosphere of Bethel High School to take on the Bees. The JV squad was led in scoring by Kaden Bryan’s 8 points, with Cameron Harris, Sean Adams, Tariq Muhammad, Sam Lewis and Romel Phillips also contributing multiple baskets. But ultimately, the JV Bulldogs were overpowered by the Bees and lost 29–46.

The varsity Bulldogs were led by top scorer Andrew Clark, who added 14 points to the scoreboard, with Trey Anderson and DeAndre Cowen following closely with 12 and 10 points each, respectively. Anderson, Cowen and Muhammad also contributed to the rebounding effort. But the Bethel boys ultimately triumphed, winning the matchup 66–38. 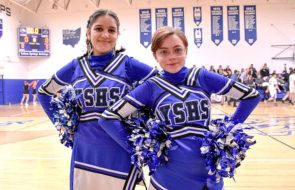 After the Senior Night presentations between the games, the varsity boys charged to a strong start, leading the game against the varsity Tigers 23–21 at half. Led by Clark’s 24 points and Anderson’s 12 points, including four key free throws near the end of the game, the Bulldogs kept up the pressure and won the game 48–41. In a nice nod to the night’s senior-focused events, the five senior Bulldogs who started the game — Fultz, Muhammad, Clark, Anderson and Kevin Wagner — each scored in the game.

In a game delayed from the previous Friday, the Bulldogs visited the Jefferson Township Broncos. The JV boys were led by top scorer Harris, who scored 9 points, followed closely by Adams, who added three field goals. But the JV Broncos effort proved insurmountable, and the Bulldogs lost the game 29–47.

The varsity match-up was a challenge from the beginning for both teams, as the lead changed back and forth a number of times in the first half. But a huge scoring effort by Clark, who had 30 points, as well as aggressive rebounding by Dimitri Wallace, Fultz and Anderson, who grabbed twenty rebounds between them, helped the Bulldogs hang on to win 54–47.

The varsity Bulldogs will travel to Troy High School to play in their first conference tournament game on Wednesday, Feb. 27, where they will face the winner of the Feb. 23 Jefferson Township/Springfield Central Catholic game.