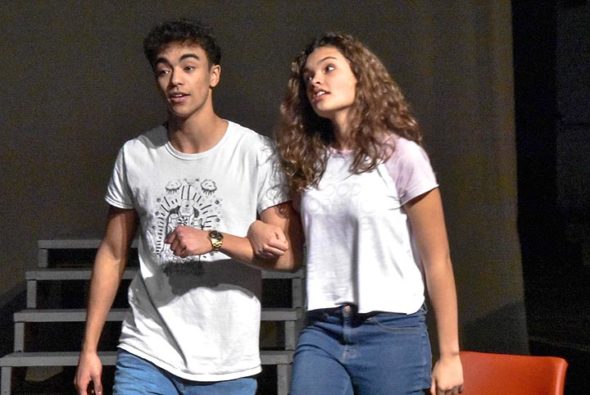 The halls are alive with the ‘Sound of Music’

“The Sound of Music” is arguably one of the most beloved works in the musical theater repertoire.

With music by Richard Rodgers and lyrics by Oscar Hammerstein II, the show won five Tonys when it premiered on Broadway in 1959. And the subsequent 1965 film starring Julie Andrews and Christopher Plummer went on to snag five Academy Awards, including best picture.

The movie version — opening with a pixie-haired Andrews twirling against an Alpine background and singing the title song — is most familiar.

Before cable, VCRs and streaming services, the movie aired once a year on television, with families gathering around the TV console for all the well known tunes, including “Do-Re-Mi,” “My Favorite Things,” “Sixteen Going on Seventeen,” “So Long, Farewell,” “Climb Ev’ry Mountain,” Edelweiss,” and “Maria,” as in “how do you solve a problem like” the so-named erstwhile religious postulant.

While the film had its differences from the stage production, the best loved songs carry over between the two. And they’ll be performed in all their glory, backed by a full pit orchestra, when Yellow Springs High School presents “The Sound of Music” stage musical this weekend and next at the Foundry Theater on the Antioch College campus.

Director Lorrie Sparrow-Knapp, who  also teaches performance arts at the middle school, said one of the biggest differences that audiences will notice is how the play, set in 1938 Austria, more directly confronts the rise of Nazism and the threat of the Third Reich.

During a rehearsal break this past weekend, Sparrow-Knapp said she plans to open the show with a trigger warning about the production’s use of Nazi armbands and pins as well as some related backdrop imagery.

In December of last year, officials at a New York City high school deemed such imagery too disturbing and presented the play without Nazi iconography, according to media reports.

The show’s depiction of rising, hate-fueled nationalism remains politically relevant, Sparrow-Knapp said. As do the examples of standing up for one’s convictions and ideals.

For those reasons, Sparrow-Knapp said, the musical continues the school’s focus this year on “the sharp edge of theater,” begun in the fall with productions of the social-media themed “Girls Like That” and a same-gender “Romeo and Juliet.”

Amidst the feel-good music and love story, there is a subversive subtext.

“The story is of real people, who became immigrants escaping persecution to be safe,” she said.

The von Trapp family, on whose life the story is drawn, left Austria for Switzerland, and then the U.S., when the family patriarch was threatened with conscription into the German Navy.

The high stakes may be what give the show its enduring power, Sparrow-Knapp said.

That and the profoundly lush, beautiful music.

In the end, “’The Sound of Music’ is a joyous experience,” Sparrow-Knapp said.

The Yellow Springs production features “a huge cast” of about 40 students.

“The best part is seeing these young people tear into this music,” the director said. “They have to give it their all. There is no halfway.”

“I love this show. It’s so beautiful,” the senior said.

Hoff, who was Laurey in the school’s 2017 production of “Oklahoma,” said she identifies so much with the 19-year-old character of Maria she had a hard time “finding who she is from me.”

The free-spirited Maria struggles to figure out who she is in the world and where she is meant to be.

Guiding her in that personal quest is the Mother Abbess of the Nonnberg convent, played by freshman Stella Lieff.

Although Lieff originally auditioned for the eldest von Trapp child, Liesl, she said she also has come to identify with her role. Although 14 years old, she has a mothering sort of reputation at school, she said.

“Ironically enough, all of my friends have called me ‘mom’ before,” she said.

Lieff also participates in SPIDEE, which stands for Students Promoting Inclusion, Diversity, and Equity in Education.

“I’ve met a lot of people that way,” she said, and she’s found that others turn to her for a calm and stabilizing presence.

“A lot of people in high school and middle school need a sense of stability outside of their family,” she said.

Lieff said she grew up watching “The Sound of Music” movie with her own family, and she has fond memories of that time together.

“I loved the movie,” she said.

She didn’t know if she could carry the Abbess, though.

“I didn’t think I could sing that high at first,” she said, of the final notes of her signature song “Climb Ev’ry Mountain.”

The nuns also sing several chants in Latin, which Lieff said was easier for her than she’d anticipated.

Joining the nun chorus after her turn as the Countess, freshman Sophia Lawson said that being part of “The Sound of Music” is a dream come true for her.

Performances of “The Sound of Music” will be presented at 8 p.m. Friday and Saturday, March 8 and 9 and 15 and 16, and 3:30 p.m. Sunday, March 10 and 17. Tickets are available in advance online at showtix4u.com. Cost online is $12 general admission and $7 for students and seniors; cost at the door is an additional $2 per ticket.