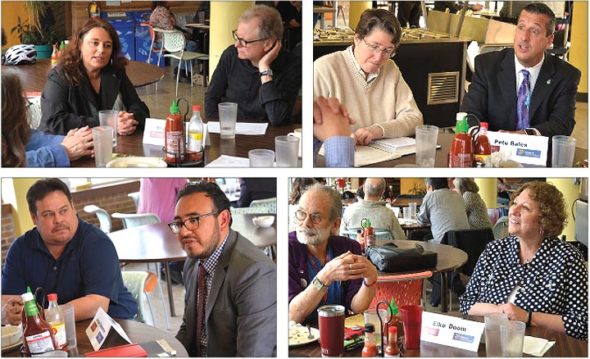 Yellow Springs may soon have a new Village manager.

After four finalists for the position visited town last week, Village Council has made an offer to one of the candidates, the News confirmed this week.

However, Council doesn’t plan to make the identity of the new manager public for several more weeks, at its next regular meeting on Monday, May 6.

“We will announce it at our next meeting and we will talk about our reasons for the selection,” Housh said at Council’s April 15 regular meeting.

“We have plenty of time for the transition,” Housh added. Current manager Patti Bates is retiring at the end of July.

During an executive session before Monday’s meeting, Council asked Village Solicitor Chris Conard to reach out to one candidate with an offer, Housh said.

If that person accepts, Council will release the name when they officially vote in the new manager on May 6.

At the meeting, Council members also reflected on what they believe has been a strong process.

“I heard from people about how impressed they were with the process this time around,” Housh said.

An appointed citizen committee of 16 people also participated in the search and selection of the finalists.

Ahead of this week’s executive session, villagers gave their input on the candidates to Council via a formal feedback form and by submitting letters and emails.

Josue Salmeron and Allyson Murray received the top scores in a tally of the 92 villagers and Village staff who completed the forms. Elke Doom was third in voting, and Pete Bales came in last place.

Villagers were asked to rank the candidates as great, good or fair in the following areas: “Motivating, Positive, Respectful;” “Objective;” “Planning and Project Management know how;” “Collaborative;” “Inclusive and Community-Oriented;” and “Innovative and Creative.” Scores of 3 (great), 2 (good) and 1 (fair) were then assigned.

Salmeron led the field in the areas of “Inclusive and Community-Oriented,” “Innovative and Creative,” and “Objective” while Murray was rated the highest in being “Motivating, Positive, Respectful” and “Collaborative.” Doom, followed closely by Bales, received the highest score in the category of “Planning and Project Management know how.”

In their comments, villagers wrote that they were impressed by Salmeron’s focus on social justice and diversity, but concerned by his limited municipal experience.

“Exceptionally talented, but experience not relevant,” one commenter wrote. Another noted the lack of experience would lead to a “longer learning curve.” Salmeron received the lowest score in the area of “Planning and Project Management know how.”

Several also mentioned that Salmeron was the best fit for the community, writing, “Values match YS,” “Understands culture of YS,” and “offers the most ‘Yellow Springs’ approach to the VM position.”

“I like Josue’s energy and long-term outlook for the village,” one wrote. Another commented, “Josue would provide a real infusion of energy, youth, intelligence and hope for our community.”

Salmeron, a 2006 Antioch College graduate, has spent most of his career in community development and advocacy, with jobs at an affordable housing organization and in the Washington, D.C., Mayor’s office.

Murray, who was a close second in scoring, was praised for her experience, especially in the field of grant-writing, and was seen as energetic and open.

She was also criticized for a comment during the public forum that she would avoid negativity in responding in public, which led one commenter to note, “no transparency.” Murray’s lowest score came in the area of “Objective.”

“Honest and upbeat,” “very team oriented” and, “real handle on municipal government,” were a few of the other comments received.

Doom also received high marks for her prior municipal experience and was noted for her research, accomplishments and economic development background.

However, Doom’s responses to questions on homelessness and community policing were noted as weak, while her recent short job tenures worried some.

“I am concerned about her demonstrated tenure in recent jobs,” one commenter wrote.

Doom is finishing a two-year contract as the manager of Valdez, Alaska, and has previously managed communities in North Carolina, West Virginia and Michigan. She received the lowest overall scores in “Motivating, Positive, Respectful” and “Innovative and Creative.”

Bales was hailed for his knowledge, experience and skills, and was noted to be practical, sensible and personable.

“I support this candidate because he is very practical and feet on the ground to manage this community,” one commenter wrote. “Hands on skills” was noted by another, and one wrote, “He knows the region best; I would grab him.”

However, Bales’ work in nearby Fairborn also was an issue for some. Bales, the assistant manager of Fairborn, is a Beavercreek resident and has said he would not relocate to the village if he was hired here.

“Certainly the most qualified, but I am unsure if he is creative or flexible enough for YS,” one commenter wrote. “I think the residency piece will prove problematic for him.” “Too big of a contrast with neighboring Fairborn and the unique nature of YS,” wrote another.

Bales received the lowest overall scores in “Objective,” “Collaborative” and “Inclusive and Community-Oriented.”

A well-attended public forum on Wednesday, April 10, was the source of much of the community feedback received on the candidates.

At the forum, each candidate had 30 minutes to introduce themselves and field a wide array of questions on community policing, affordable housing, working with the news media, the council-manager relationship, dealing with racism in the public safety department, disciplining employees and more.

At one point, the audience chuckled when Murray was asked via an anonymous question read from an index card, “Do you know what you’re getting into?”

Bales spoke first, highlighting his 17-year municipal experience in the much larger community of Fairborn, where he said he managed large budgets and developed strong relationships, saying he was a “hands-on practitioner.” Bales said that he was drawn to apply for the position because, “there’s no better community in the county if you enjoy the outdoors.”

“It is a destination spot no matter what some villagers think,” Bales said. “I think we need to run with it, embrace it, enjoy it and make the best of it.”

Salmeron spoke about working in the areas of low- and moderate-income housing development, family reunification, advocacy for Latino community of Washington, D.C., and, overall, “ensuring that everyone has access to resources.”

In response to questions, Salmeron spoke about dealing with racial microaggressions and developing housing for wage-earners who can’t afford to live here, and identified Yellow Springs’ values were equity, justice and inclusion. Salmeron also addressed how to balance the needs of the community with increased tourism.

“We need those outside dollars but there are also economic sustainability initiatives to make sure the money already here circulates internally more,” Salmeron said.

In her introduction, Murray highlighted her experience in getting municipal projects funded, and in her desire to return to small town life after living and working in Columbus.

“I understand the nuances of a small town and I really miss the interaction and relationships,” Murray said.

Addressing the role of manager, Murray said: “The citizens bring their concerns. It would be my job to be the workhorse behind getting that done.”

Murray said she sees the village as welcoming and inclusive, values she would work to maintain. She also believes the village should focus on “controlled growth.”

Doom began by saying that she has 26 years in municipal management, which has been her passion.

“Just like you, I cared about my community. I started going to Council meetings, and it made me realize that those who get involved in their community make a difference,” Doom said.

In response to questions, Doom touted partnerships with faith-based organizations to address homelessness, identified the high cost of housing as a major problem and praised the village’s commitment to renewable energy.

“You should win an award for what you’ve done at this time with your energy,” Doom said.

For a detailed report from roundtable discussions with candidates, visit ysnews.com.