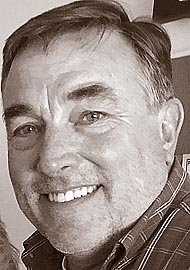 Michael D. Haller, proud father of Anna Hall, Jonathan Haller and Isaac Haller; late husband of Donna Haller and Angela Haller; and “Papa” to Arthur Hall; passed away on March 27, 2019. His mother and father, many loving aunts and uncles, and good friend, Dr. Bob Brewster, preceded him in death.

Mike was born on Nov. 25, 1955, to John Gabriel Haller and Dorothy Lee Wourms. He grew up in Dayton where, in 1982, he started his own business as a woodworker, designing and constructing custom trade show displays and commercial cabinetry. His professionalism, creativity and hard work — and luck in finding his longtime and loyal friend and employee, Michael “JR” Huelsman — led to the establishment, and ultimate success, of Haller Displays.

His hard work was always supplemented with a healthy dose of play, often in the company of his many close friends, who have been loving and supportive from childhood to his final days. These loyal friends — often referred to as “The Guys” — were such an important part of his life. He valued his friendships, and when not with family, he was playing euchre with them on “Big Wednesdays,” camping or taking long motorcycle trips.

In his early 20s, he bought a motorcycle and began his lifelong hobby of riding. His bike took him around the country, whether it was somewhere in Southwest Ohio for a piece of pie, or Acadia National Park in Maine, the latter becoming a regular trip that he took over 15 times, the last being in fall of 2018. He always had fond memories of the trips he took with his friends.

Preparing to settle down, he married Donna in 1987 and moved to Yellow Springs, where he raised his three children. After they parted ways, he married Angela and spent about five years designing and building the house that he would remain in until his death. He passed most of his time there, listening to records, cooking for loved ones and enjoying time with his best friend and wife. In May of 2017 his grandson, Arthur, was born and added some warm flavors to his life.

In his later years, Mike proved to be a loyal friend, a wonderful father and a fantastic grandfather. He will be lived through his descendants. We love you, Michael.