With the best weather conditions of the year and a full grandstand, the Bulldogs competed with vigor and energy as they entertained 13 teams at the annual Bulldog Invitational, Friday, May 3.

By the conclusion of the meet, the girls squad finished atop the standings with 113 points and earned the first-place trophy by outdistancing fellow league member Dayton Christian.

The girls squad was led by sophomore Annlyn Foster, who was a part of three first-place performances. She ran to a personal best of 15.90 in the 100 hurdles; she teamed with Malaya Booth, Haneefah Jones and Sophia Lawson in the 400 meter relay; and she concluded the night with another first place in the 1,600-meter relay with Devyn Deal, Jones and Avery Reeder.

The girls team also had four runner-up finishes, with Foster in the 300 hurdles; Natalie Galarza, 3,200 meters; and Jones in the long jump and high jump.

The boys team had a respectable ninth-place finish and was once again led by senior Teymour Fultz, who finished the one-lap 400-meter race in first place with a personal best of 53.09.

Two third-place efforts were achieved by Ibrahim Chappelle in the long jump and by the 1,600-meter-relay team of Finn Bledsoe, Fultz, Zach Lugo and Calum Siler.

The 3,200-meter-relay team of Bledsoe, Raven Campbell, Vaughn Hendrickson and Zach Lugo ran to a fifth-place finish.  Completing the scoring for the Bulldogs was Yanne Gilley in the 300 hurdles.

The Bulldogs will compete at the Metro Buckeye Conference league meet on Saturday, May 11, beginning at 10 a.m., at Cedarville University, followed by the District competition on May 14, beginning at 4 p.m., at Milton Union High School.

Click here to see a larger version of the senior photo. 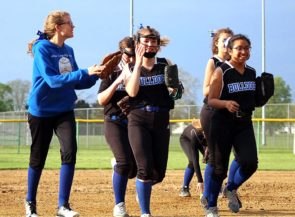 In an away game against Dayton Ponitz on Monday, April 29, Bulldog teammates Harvest Lechler, left, and Sara Zendlovist, far right, congratulate shortstop Lily Rainey, center, as she runs off the field after recording every out in the inning — including an unassisted double play on a popup. (Photo by Coach Jimmy Delong)

There’s an old saying that defense wins championships. Last week, when the Lady Bulldogs were clinging to a lead during an away game on Monday, April 29, against Dayton Ponitz, freshman shortstop Lily Rainey saved the day for the Lady Bulldogs with her defensive prowess. First, Rainey raced behind second base to make a sparkling catch of a short pop up and then turned it into an unassisted double play by sprinting to second base to double off the runner. Then, for good measure, she  grabbed another popup from the next hitter for the final out, tying a school record by recording every out for the inning. The plays by Rainey seemed to energize the Bulldog offense as they exploded for 16 runs in the next two innings to win by a final score of 21–13.

The win was not an easy one for the Bulldogs. The team fell behind 5–1 after one inning, but then used hits by Zoe Lafferty, Abby Florence, Rainey and Rosemary Bermester to score 20 runs over the last three innings to pull away for the win. Florence pitched a complete game for the victory.

The next day, Tuesday, April 30, the Bulldogs also played a slugfest against Middletown Christian. Taking an 8–7 lead in the first three innings couldn’t hold off the explosive hitting of the Middletown team, however, as Yellow Springs lost by a final score of 28–24.

The Bulldog offense was led by hot hitting Zoe Lafferty as she had five hits, drove in four runs and scored three runs.

The Bulldogs Senior Night has been rescheduled and will now be on Friday, May 10, at Gaunt Park, again against Middletown Christian. Game time is 5 p.m.