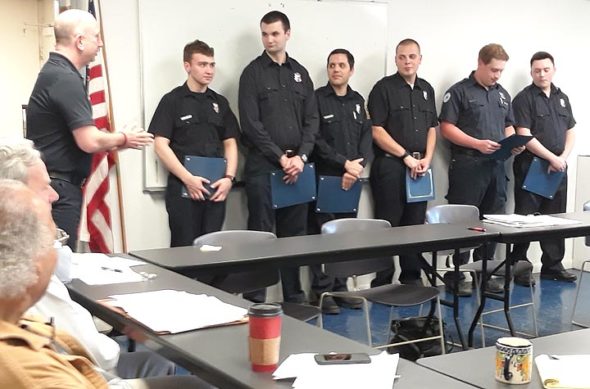 The crew members were recognized for their life-saving actions on a call on March 17 to a Cornerstone Trail address in Bath Township.

The report of a man with chest pains came in at 3:13 a.m., and the crew arrived at his home within nine minutes, quickly determining that the man’s condition was serious.

Upon being loaded into the medic unit to take him to Soin Medical Center, the man became unresponsive and went into cardiac arrest.

The crews immediately started resuscitation and began emergency transport to the hospital. While en route, the patient regained a heart beat and was conscious on arrival.

Kettering Health Network EMS Coordinator Kristi Bradford, who was at the Trustees meeting to present the crew members with challenge coins from KHN, said that only 5–7 percent of patients in such a situation recover. The patient in this case went home three days later with no ill effects, she said.

In addition to receiving the challenge coins, the crew members were given individual commendations for exemplary service from the department.

In handing out the commendations, Chief Colin Altman noted that “their performance in this situation, both as individuals and as a crew, demonstrates their commitment to professionalism and quality care.”

The crew also was thanked for their service by the Miami Township Board of Trustees and by Bath Township Trustee Steve Ross, who was in attendance.