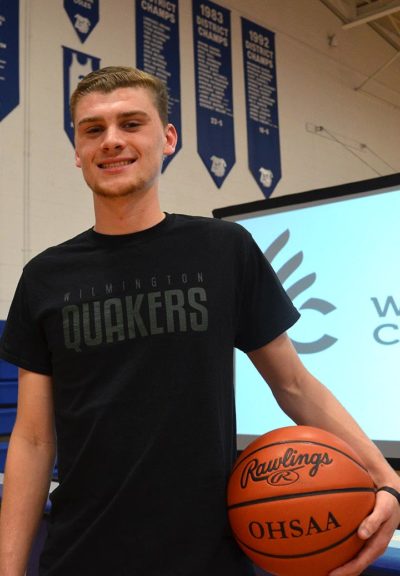 YSHS senior’s best score — Clark to play for the Quakers

Andrew Clark is the consummate competitor. Looking back on his four-year varsity basketball career at Yellow Springs High School, Clark struggled to pick out a single highlight. Instead, each game was as important as the last.

“Every game was my favorite game,” Clark said last week. “I love the adrenaline rush — I really like competing.”

Next year, Clark will take his bulldogged spirit and dangerous deep ball to nearby Wilmington College. He committed to the NCAA Division III school recently, and celebrated the achievement at a signing ceremony at YSHS last week.

“I felt comfortable playing with them,” Clark said of selecting the Quakers for collegiate ball. He shares the same style of play as his chosen school, he said.

“I like to get up and down the court and shoot,” he said.

Clark can really shoot. In his senior year, he averaged 17.5 points per game, second best in the conference, and in three games scored 30 or more points. In the end, Clark finished with 983 career points.

A threat from behind the arc, Clark also regularly made college and NBA-range threes this year, making 49 of the 128 three-pointers he attempted over the season.

YSHS Athletic Director Nate Baker said he was “extremely proud” of Clark for his accomplishments.

This summer, he hopes to up his game the same way.

Although every game mattered, Clark did touch on the stellar YSHS team he played on as a freshman. That year YSHS went to the regional finals in the best finish for the boys team since 1983.

Playing for a small school, Clark was grateful he got varsity minutes his freshman year. He’s started ever since.

“I started my sophomore year and never came out,” Clark said. “It gave me a lot of experience.”

But YSHS’ small size also had its disadvantages when it came to college recruitment, Clark said.

“It’s so small you sometimes don’t get noticed,” he said.

So Clark took his college prospects into his own hands, mailing out copies of highlight tapes to college coaches, including the coach AJ Wilmington. A college visit to Wilmington sealed the deal.

Clark grew up in the outskirts of Yellow Springs on Huston Road and attended local schools from kindergarten. He’s the son of Mitch Clark and Tracy Hoagland-Clark and has two brothers, Joshua and Jonathan, who also attends Wilmington.