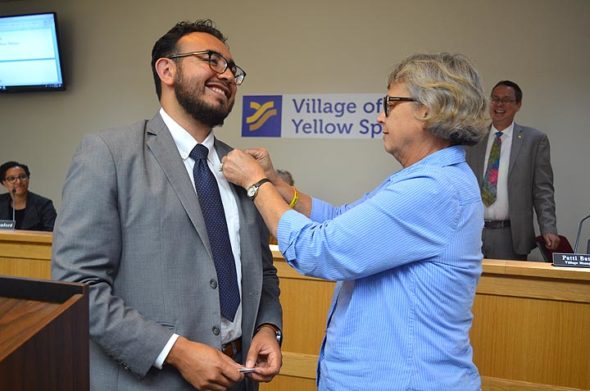 New Village Manager Josue Salmeron was sworn in at Council’s meeting on Monday, June 17. In an impromptu ceremony, outgoing manager Patti Bates went on to fasten Salmeron’s lapel with an official Village of Yellow Springs pin. (Photo by Megan Bachman)

A section of sidewalk along Limestone Street may stand as the final accomplishment of departing Village Manager Patti Bates.

Last week, Bates learned her request for a $400,000 grant to pave a sidewalk between Bill Duncan Park and Walnut Street was secured. To her, it was a nice way to end her five years with the Village and more than 30 years in public service.

“My goal was to leave [the village] a little better than I found it,” Bates said at Monday’s Council meeting. “I think I’ve done that.”

Bates was honored at Council’s June 17 regular meeting before new manager Josue Salmeron was sworn in. Council members each thanked Bates for her service.

Council Vice President Marianne MacQueen said that she has found Bates to be a true public servant and one who always said what she meant. Council members Kineta Sanford and Lisa Kreeger were grateful that Bates helped them learn the ropes as new Council members.

“You’ve done a lot to help the village move its goals along,” Housh said. “It’s going to be hard to not have you on this side [of the table].”

Bates said she enjoyed working with each Council member and the entire Village staff, and also thanked the community.

“My team is fantastic,” Bates said, later adding, “I’m confident that this staff, under Josue’s guidance, will continue to do the good things that they’ve done.”

“Thank you to the citizens of Yellow Springs, because you are such a great community and I do not regret moving here,” Bates said.

Bates will depart at the end of the month. A celebration of Bates’ retirement will be Thursday, June 27, from 6 to 8 p.m. at the Bryan Center, Rooms A&B. All are welcome to attend.

In an interview with the News, Bates reflected on her tenure and accomplishments, and shared her perspective on local issues.

Bates sees working as the Village manager as the pinnacle of a 30-year career in public service that began in dispatch.

Before coming to Yellow Springs, she worked for 8 years as the Village administrator for Williamsburg, Ohio, 7.5 years as the director of administration at a county jail and 12.5 years in police and fire dispatch. 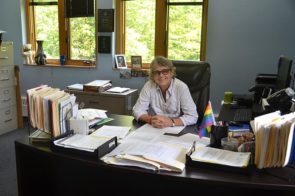 Patti Bates departs the Village’s top job at the end of June. The outgoing Village manager recently sat at the desk where she worked for the last five years. (Photo by Megan Bachman)

“The job has good days and bad days, but at the end of the day, it is my responsibility to make sure what everybody does is the way it needs to be done,” Bates said of her role.

At 60 years old, Bates looks forward to time to read and relax after averaging 50- to 60-hour work weeks while in Yellow Springs.

In her retirement, Bates plans to dive in to the hundreds of unread books stacked in the Stewart Drive home she shares with her husband, Mike. She’ll continue caring for her aging father, along with her six cats. The breast cancer survivor is also training for a 60-mile walk for the cure.

“It’s near and dear to my heart, and I will keep walking until they find a cure,” Bates said.

Still, it will be a difficult transition.

“I imagine once I’m done, I’ll be twiddling my fingers and bored,” Bates said. “It will be weird to not go to work.”

Bates has been working since she was 14, she said, starting out at a laundry and dry cleaners. At age 26, while a night dispatcher, she alternated 12-hour shifts with coursework in public administration at Northern Kentucky University, eventually getting her master’s degree.

“I knew I liked public service and that was the natural next step,” Bates said.

Each job in public administration has been similar, Bates reflected. “The difference is the community,” she added. In Yellow Springs, that meant more public engagement.

“In Williamsburg, we never had anyone show up at our meetings,” Bates said. “Here, everyone is active and involved. That’s a good thing.”

But it wasn’t always easy. In fact, one of hardest part of the job here was dealing with local discourse on Facebook, Bates said.

“It can be so helpful and so detrimental,” she said of social media. “It can be so harmful to the community. Everyone is stirred up and often without all the facts.”

One way Bates pre-empted trouble was forbidding Village staff from engaging on Facebook forums, except to add or correct facts. Still, it impacted her staff.

“It affects staff morale,” she said.

With new EPA regulations addressing sewer and water systems, the Village will have to upgrade them, or face fines, she explained.

“Someone is going to have to find a way to pay for them,” Bates said. “And it can’t just be villagers.”

The job also had its high points. What she said she enjoyed most was the people.

“They are wonderful,” she said of villagers. “I’m from a small community, so I’m familiar with that support, that feeling of community. Yellow Springs has that.”

Bates’ proudest accomplishment was completing the new water plant. The task stretched the entirety of her tenure.

“I was told to tackle that when I got here, and I just paid the last bill,” Bates said. “That’s the time investment.”

“At the end of the day, you get a nice water plant. I do find that fulfilling,” she said.

Bates said she brought a participatory type of leadership to the Village, and encouraged a teamwork mentality that allowed employees across departments to collaborate more easily.

“I don’t get anything done on my own,” Bates said.

She added that she’s confident Salmeron will pick up where she left off.

“It’s time for me to step back, take a break and let [Salmeron] take it to the next level,” Bates said.

Bates also had some advice for Salmeron.

As she departs the job, Bates hopes that villagers appreciate how dedicated and hardworking the Village staff is, and that they communicate their appreciation regularly.

“Know that everyone is really committed to the Village,” she said of staff. “If they do something well, write a note. It helps to hear positive reinforcement.”

“The people who work here really do care about the community.”