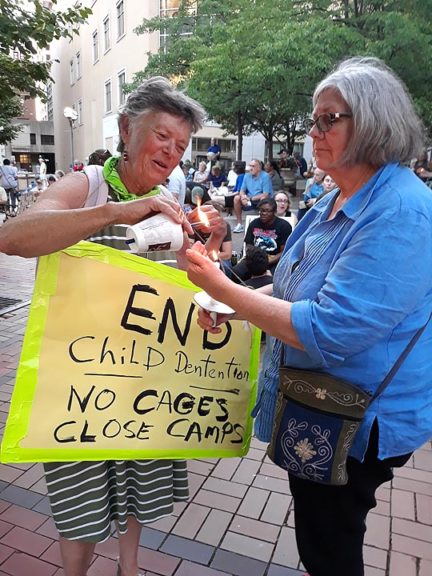 Villager Pat Dewees, left, lights the candle of retired Rev. Lynn Sinnott, of Cedarville, in Dayton at a vigil held in Dayton's Courthouse Square seeking the closure of immigrant detention camps in the U.S. (Photo by Carol Simmons)

Yellow Springs was well represented Friday, July 12, as an estimated 300-some people from the Dayton area gathered in that city’s Courthouse Square as part of a nationwide vigil seeking the closure of immigrant detention camps in the U.S. Members of the locally based World House Choir also led the gathering in rallying songs. Participants held lighted candles for two minutes of silence to conclude the two-hour action billed as “Lights for Liberty.” A number of Antioch College alumni, in town for the annual reunion, assembled at the same time with candles outside the Coretta Scott King Center on campus. Villager Pat Dewees, left, lights the candle of retired Rev. Lynn Sinnott, of Cedarville, in Dayton.