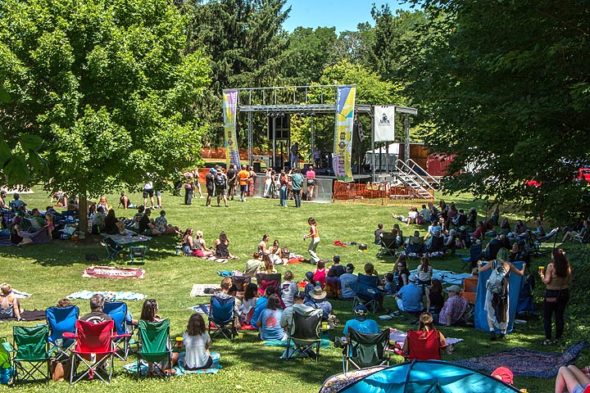 Crowds gathered on the grounds of the Bryan Center early in the day at last year’s SpringsFest. The music festival will return this Saturday, July 6, 11 a.m.–11 p.m., with a new lineup of acts, as well as food, beer and art vendors. (YS News archive photo by Megan Bachman)

The fourth annual SpringsFest will return to the village on Saturday, July 6, with 12 hours of music, craft beer and food vendors on the grounds of John Bryan Community Center.

SpringsFest producer and village native Conor Stratton of Great Guys Entertainment, which facilitates the day of music each year,  spoke to the News this week about this year’s lineup, which he said is significantly more diversified than years past.

“Musically, the spectrum is pretty wide,” he said. “That was intentional — so there’s something for everybody.”

“On the rocking, high energy front, you have Post Animal, and Deerhunter, live, can be like that, too, believe it or not,” said Stratton.

He pointed out that Amen Dunes and Chris Cohen occupy the opposite end of the indie rock spectrum, with relaxed, subdued vibes. Grapetooth, he said, is the side project of Clay Frankel of Twin Peaks, who headlined last summer’s Springsfest.

“[Grapetooth] is a different beast than Twin Peaks — more dancey, but the same kind of intensity, so if you liked Twin Peaks last year, you’ll enjoy Grapetooth this year,” he said.

Stratton considers the line-up at the festival as one of the best in its history, saying that the goal of the event is essentially to “treat” residents of the town and surrounding areas to acts they might not normally get a chance to see so close to home.

“It’s really hard for me to believe that some of these bands are coming here — Yellow Springs is blessed,” he said. “So if you’re not familiar with the bands, you’ve gotta trust us, because it’s not something to be missed.”

SpringsFest also features a significant change in terms of security this year, Stratton said, in that those attending will no longer be able to bring backpacks into the festival ground, unless the bags are entirely transparent. Firearms, as in previous years, are not allowed.

Stratton also stressed that SpringsFest is now, and has always been, a family-friendly event; children 12 and under are admitted free.

“We get messages every year from people wondering if they can bring their kids,” he said. “We really want to encourage people to bring their families — this is an all-ages event.”

Alongside food vendors and art merchants, the festival will also feature its namesake craft beer, SpringsFest, an American pale ale that was brewed as a collaborative effort between Cincinnati brewery Rhinegeist, Jackie O’s of Athens and the village’s own Yellow Springs Brewery.

Last year’s SpringsFest hosted nearly 2,000 music lovers, and Stratton said this weekend’s fest is on track to meet or beat last year’s attendance; the maximum capacity for SpringsFest is 2,500. Despite the fact that crowds are growing, Stratton said that he and the managers who will be on-hand for the festival have only gotten better at making sure things run smoothly.

“It’s become a well-oiled machine,” he said. “I might actually get to relax a little and enjoy it this year.”

SpringsFest will be held Saturday, July 6, 11 a.m.–11 p.m., on the grounds at John Bryan Center, located at 100 Dayton St. General admission tickets to SpringsFest are $60; children 12 and under will be admitted for free. Those attending are welcome to bring blankets for seating. For more information on SpringsFest, and to hear a playlist of selections from this year’s featured artists, visit http://www.springsfestival.com.