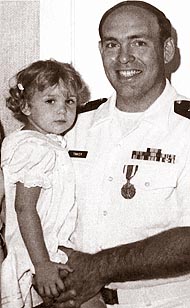 Bill was born on March 25, 1946, in Cambridge, Mass. He was the son of Alfred Bates Tinker and Elizabeth Bowman Tinker. He was raised with his four siblings, primarily in Truro, Mass., where his family owned and managed a motel, Horizons. During childhood, he developed many close friendships, as well as a deep love of swimming, sailing and all things related to the water.

Bill graduated from The Hinckley School in 1964 and from Michigan State University in 1969. After completing the Reserve Officer Candidate Program in Newport, R.I., he was commissioned by the U.S. Navy in June 1970. He served the Navy for 22 years, many of them overseas, including three years as Officer in Charge of the U.S. Naval Fuel Detachment in Sasebo, Japan.

He retired from the Navy in June of 1992 with numerous honors, including the Meritorious Service Medal with a Gold Star, Joint Service Commendation Award, Combat Action Award, Meritorious Unit Award, National Defense Ribbon with one star, Vietnam Campaign Medal with two stars, Humanitarian Service Award, Overseas Service with four stars and the Vietnam Service Medal. Bill continued to serve the U.S. Navy in a civilian capacity, specializing in fuel and supply operations, primarily for DG21 in Diego Garcia and Burns and Rowe in Guantanamo Bay, until his retirement in 2017. In both his naval and civilian careers he distinguished himself by his kindness and his warm relationships with co-workers and employees, whom he considered his family away from home.

Bill married Elizabeth Ann “Betty” Benton, of West Point, Ga., in December, 1972, and together, they raised two daughters. Bill was an affectionate and playful father who always made sure that his children felt unconditionally loved. In recent years, he moved to Yellow Springs to be close to his grandchildren, and could be found cheering on the sidelines of almost every soccer, basketball and baseball game they played.

Bill will be remembered for his very silly sense of humor, his ability to bring laughter to any situation, his talent as a “dog whisperer,” his limitless kindness and generosity, his intellectual curiosity and passion for history, his service to his country and his belief in freedom and equality for all, his enduring faith in Christ, his vast love and loyalty to his family and friends and for giving the best hugs in the world. He will be dearly missed by many.

A service in his memory will be held at Mecklenburg Community Church in Charlotte, N.C., on July 31 at 6 p.m. In lieu of flowers, please donate to the American Heart Association or Disabled American Veterans.