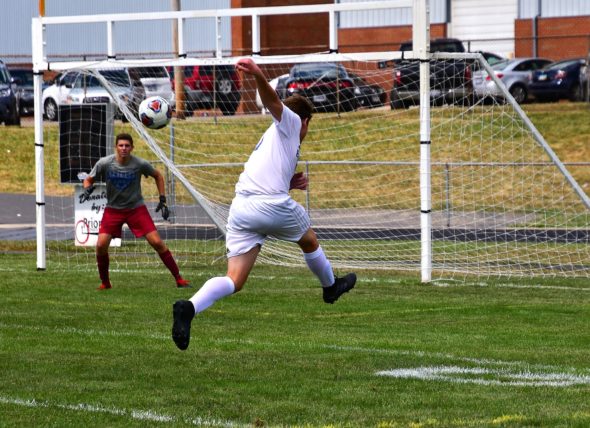 In their sweltering, humid gym, the Bulldogs opened their season against Division I Springfield High School. The Wildcats came prepared for revenge after being beaten by the Bulldogs in four sets last year at their home gym. Springfield took control of the first game while the Bulldogs were finding their groove.

Despite a 6–0 serving run by senior Tyler Linkhart, the Wildcats battled back to keep the set close, but finally pulled away at the 16–17 mark to win the set, 21–25. That seemed to wake up the Bulldogs, because they came out in the second and third sets ready to battle. With better ball control, the Bulldogs were able to get their offense rolling to win the second set, 25–22, and the third set, 25–12.

The Bulldogs seemed to find their momentum in the fourth set and were winning, 19–15, when Springfield called a time out.  The Wildcats came back on the court with a renewed sense of determination and were able to tie the game at 21–21.  An ace by the Wildcats gave them a point advantage, but a dig by sophomore Aaliyah Longshaw on a tip gave the Bulldogs a sideout.

With the game tied, 22–22, the Bulldogs hit the ball out of bounds, which gave the Wildcats the serve back. The Wildcats then scored on an ace serve, which set them at game point — but a kill by Linkhart allowed the Bulldogs one more shot.  Even with a tough serve by sophomore Angelina Smith, the Wildcats were able to set up their offense, producing a kill by hitting off the Bulldogs tall block, consisting of juniors Emma Ronnebaum and Annlyn Foster. Another service ace gave the Widcats the set. With the sets split between the two teams, it came down to a game of first to 15 points.

Initally, the teams traded points, keeping the game close until Ronnebaum started serving. Serving up three of her nine wicked aces of the evening, which the Wildcats could not handle, Ronnebaum ran the score up to 5–1. The Wildcats were able to capitalize on a mishit to regain the serve, but a service error on their part resulted in Longshaw serving the two remaining points needed to clinch the game for the Bulldogs.  The Bulldogs won, 21–25, 25–22, 25–12, 23–25, 15–6.

Girls start season on the road

Girls Soccer started the season on the road with a pair of away games.

The second, Saturday, Aug. 24, against Springfield’s Northeastern High School, ended in the Bulldogs’ favors, with the crew taking the game 4–3.

The boys soccer team opened the season with a pair of wins followed by a tough home loss.

Junior Kayden Bryan was named player of the game after the team’s first outing Tuesday, Aug. 20, against Graham Local.

The Bulldogs finished the game 4–0 at home.

On Saturday, Aug. 24, the Bulldogs won again, 10–0, in a blowout against Springfield’s Northeastern on Northeastern’s turf.

Monday, Aug. 26, back at home, the boys fell 3–0 to Waynesville, in nonconference play.