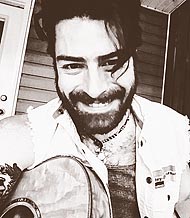 Chris was a son, grandson, brother nephew, uncle and friend. He leaves behind his mother, Carol Morris; sister, Stephanie Laurito; brothers, Curtis and Spencer DePriest; and a host of loving uncles, aunts, cousins, nieces and nephews. He was preceded in passing by his father, Curtis DePriest.

A veteran of the war in Afghanistan, Chris served his country in both the U.S. Army and the U.S. Marine Corps. He was an intelligent, fun-loving and carefree spirit who never took himself too seriously. Chris made friends easily and everywhere he went. His love for animals, dogs especially, was matched only by his love for music. Rarely could he be found without a guitar in his hand. He was a master of sarcasm, and had a unique gift for making people laugh in any situation. Chris touched the lives of many throughout his life and will be remembered and missed always by those who knew him.

His body was laid to rest in Dayton, Ohio, at the Dayton National Cemetery. Graveside services were held Thursday, Aug. 1.

Donations in Chris’ honor may be made to the PTSD Foundation of America at ptsdusa.org.