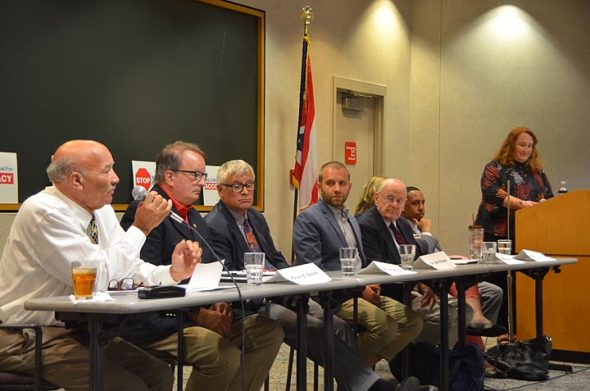 A panel of journalists, politicians and educators aired their concerns about the proposed sale of Cox Media, which owns the Dayton Daily News and WHIO TV and radio, to a private equity firm, Apollo Global Management, during an event on the University of Dayton campus on Monday, July 29. Speaking is Tom Roberts, a former state legislator and past president of the Ohio Conference of the NAACP. To his right is Kevin Smith of Ohio University’s journalism school, former Dayton Daily News reporter Jim DeBrosse, UD political science professor Joel Pruce, veteran journalist Bob Daley, Dayton Mayor Nan Whaley (obscured), Yosef Getachew of Common Cause and Catherine Turcer of Common Cause Ohio. (Photo by Megan Bachman)

Private equity firms now own more than one-third of major news outlets in the U.S. Working journalists have declined by half in a decade. And half of all Americans don’t get news from the community in which they live.

These statistics on the state of media  were shared at a panel discussion in Dayton on Monday, July 29.

The event was organized to discuss the pending sale of Cox Media — which owns the Dayton Daily News, WHIO TV and radio and other news outlets — to the private equity firm Apollo Global Management.

The consolidation of media, the crisis in journalism and the role of media in democracy were other themes explored at the panel, held at the University of Dayton  and attended by around 130 people.

“If we don’t have access to good information, we don’t have democracy,” said Catherine Turcer of Common Cause Ohio, which is fighting the sale.

According to Yosef Getachew of Common Cause’s Washington, D.C., office, statistics show that those who read local news are more civically active, and are more likely to vote and take public stances.

“Our news and information have been significantly diminished,” Getachew added on the state of media. “People don’t know what’s going on in their town halls and school boards.”

The struggles of newspapers and other news entities in the digital age is prompting a new era of media consolidation, Getachew added. But those large corporations — like Sinclair and Gatehouse Media — typically strip newsrooms of their resources, exacerbating the problem,  Getachew said.

“They don’t care about journalism, they only care about dollars,” he said.

Yellow Springs villager Ellis Jacobs, a public interest lawyer, helped organize the event. He is worried that if the Federal Communications Commission approves the sale, journalism in Dayton will suffer.

“There is substantial risk that this private equity firm will start cutting costs as a way to increase profitability, and reporters, who are a big cost, will be cut first,” Jacobs said.

The stakes are high, said panelist Tom Roberts, a Dayton politician and former president of the Ohio Conference of the NAACP. The media, for instance, played a significant role in the civil rights movement, he noted.

“Had it not been for the media, most the world would not have known about Birmingham or Montgomery or any of the atrocities going on in the South,” he said.

Cutting newsroom staff and outsourcing newsroom functions to headquarters outside the communities has another negative impact — on diversity, Roberts added.

“The media should represent the people and speak for the people they cover,” he said.

The recent wave of consolidation comes as newspapers have lost both revenue and readership over the last few decades, explained panelist Kevin Smith, who directs the Kiplinger Program for Public Affairs Journalism at Ohio University.

“The move to digital has not been profitable for newspapers,” he said.

Online advertising is now larger than traditional advertising, and Facebook and Google dominate the online segment, together taking up about 60 percent, according to the market research firm eMarketer. As a result, newspaper advertising revenue, which was $49 billion in 2006, fell to half that amount by  2012, according to the News Media Alliance. By 2018, it was $16 billion, according to PricewaterhouseCoopers.

Readership also went digital, with a new expectation that news be free, Smith added. However, there are costs.

“The public doesn’t see the value in paying for news,” he said. “But not paying for it will invite equity firms in and end up costing you a lot, and not just for yourself, but for your community.”

One in five U.S. newspapers has shut down in the last decade and a half, according to a University of North Carolina study last year. That has led to an expanding news desert, where close to 200 U.S. counties now have no news outlet at all.

According to a Policy Matters Ohio report released on Tuesday, Ohio has lost one-third of its newspapers since 2004. When Youngstown’s 150-year old newspaper, The Vindicator, closes at the end of the month, the city, with a population of 65,000, will be the largest in the U.S. without a newspaper.

In other communities, news is still available, but of lower quality, panelists noted. Former Dayton Daily News reporter Jim DeBrosse saw how newsroom resources — and jobs — were cut at that paper in recent years as readership fell from a peak of 240,000 to 90,000 today.

Readers aren’t getting the news behind the news — reporters are just chasing breaking news,”  DeBrosse said.

Instead of being focused on making money, newspapers should focus on serving their readers,  DeBrosse added.

“Newspapers have a responsibility to inform the readers. They don’t just belong to their owners, they belong to other communities.”

Dayton Mayor Nan Whaley said she has watched decline in the Dayton Daily News’ coverage of the city in her 14-year political career.

“There’s no depth anymore,” she said.

Daley added that because of Dayton’s problems — including recent tornadoes that cost $500 million in damages, continuing racial segregation and having one of the worst school districts in the state — it is an especially hard time for a sale to a private equity firm.

“God forbid our community should become a news desert,” he said.

Earlier this year, Cox Enterprises and Apollo Global Management agreed to create a private company with some of Cox’s media holdings. As the FCC reviews the application, Common Cause is urging concerned citizens to voice their opposition.

According to Getachew, while FCC regulations have prohibited media companies from owning both a newspaper and TV station in the same community, Cox was given a waiver because it was established before the rules took effect. Those rules, however, were rolled back in 2017,  Getachew said.

“The idea behind these rules is if you consolidate too much power in one entity, they can control what you see, what you hear and what you read,” Getachew said in an interview. That, in turn, affects the “the number of independent voices, diversity and sources of news programming” available to a community, he said.

Cox Media Group, headquartered in Atlanta, also owns the Springfield News-Sun, the Journal-News (Hamilton), the Atlanta Journal-Constitution and more than 100 radio and TV stations and news websites across the U.S. It’s a subsidiary of Cox Enterprises, a $21 billion global conglomerate.

Cox Enterprises traces its founding to Dayton in 1898, when James M. Cox purchased the Dayton Evening News for $26,000, soon changing its name to the Dayton Daily News. In addition to building a massive media and communication company, Cox went on to become an Ohio governor and U.S. presidential candidate.

Apollo Global Management is a private equity firm with about $280 billion in assets under management. According to a Vanity Fair article in April, Apollo has purchased 29 television stations across the country in recent years. One unnamed Wall Street veteran commented in the article that moguls such as those at Apollo “know that television is what gets senators elected.”

“If you get senators elected, you get laws passed and help every industry you have an investment in,” they said.

The future of media

How, then, can newspapers and other media outlets survive?

Several ideas were aired at the meeting, from nonprofit news entities, such as those focused exclusively on investigative journalism, to the co-op model.

Speaking from the audience, 91.3 FM–WYSO station manager Neenah Ellis offered another alternative. She shared how the radio station grew from an 11-watt student-run station at Antioch College to a 50,000-watt station that can reach two million people.

WYSO is in the process of transitioning to a fully community-owned, independent station, Ellis said, and hopes to invest more, rather than less, in news-gathering.

“We’re setting our sights on growing our newsroom,” Ellis said, to applause.

To submit a comment to the FCC on the proposed sale of Cox Media, visit bit.ly/DaytonMedia