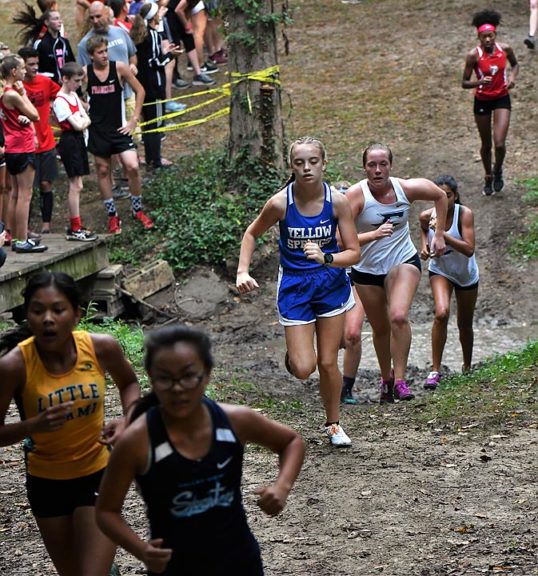 Freshman Josie DeWine achieved a personal best time of 22:56 and placed in the top 10% of a tough competitor field during the Bellbrook Invitational on Saturday, Sept. 14. (Photo by Kathleen Galarza)

Varsity volleyball squad yet to lose

Last week, the Bulldogs had two big games back to back that were must wins for them to keep the Metro Buckeye Conference, or MBC, title. Having won the MBC title last year, with no losses in conference play, the Bulldogs were ready to fight to keep their spotless record.

First up Monday, Sept. 16, were the Dayton Christian Warriors, who gave the Bulldogs a competitive game. The Warriors had a few players who were ranked high in service aces, so one of the Bulldogs’ strategies was to control the opponent’s serving game and prevent any service aces by the Warriors. The Bulldogs stepped up to the challenge and allowed only one service ace for the entire match.

The Bulldogs showed their own strength at the service line, with Tyler Linkhart making 25 serves (11 of which were aces) during the match — essentially earning enough points on her serves to win an entire set alone. She also had 16 kills, 22 assists, 2 blocks and 12 digs.

Olivia Snoddy followed with a strong showing at the service line with five aces along with 10 digs. Emma Ronnebaum put down 19 kills and 2 aces along with 6 blocks while digging up 5 hits by the Warriors and putting up 17 assists. Aaliyah Longshaw was unstoppable against the Warriors with a season high of 8 kills along with 9 digs. Angelina Smith and Annlyn Foster kept the Warriors from scoring with 20 and 12 digs, respectively. The Bulldogs shut down the Warriors in just three sets 25–14, 25–19, 25–13.

Next up, Tuesday, Sept. 17, were the Troy Christian Eagles. With the Bulldogs sitting undefeated at first place in the conference, the Eagles were in second place — their only loss to the Bulldogs in four sets earlier in the season. The Yellow Springs squad knew the Eagles would be fighting hard to end the Bulldogs’ winning run.

The first two sets of the match proved uneventful for the Bulldogs, as they played hard and came out on top 25–23 and 25–16.

Things changed, however, in the third set as the Eagles came out with a new determination. Keeping the set close up to the 17–17 mark, the Bulldogs seemed to think they were still in control, but the Eagles’ libero went on a serving run that put the game at 17–24.

With Ronnebaum back at the serve line, the Bulldogs earned three points to pull the game to 20–24, but a kill by the Eagles gave them the point they needed to close out the set.

The Bulldogs led by at least four points for most of set four, but more tough serving by the Eagles gained them the lead again at the 17–17 mark. Miscues and poor passing by the Bulldogs allowed the Eagles to take set four 19–25.

With the fifth and final set of the evening looming, the Bulldogs huddled up to talk strategy. The team came out with an intensity that took the Eagles by surprise. With Olivia Snoddy serving up six straight points early in the game and big digs by Angelina Smith, the Eagles couldn’t find a weakness in the Bulldogs lineup. Each team member scored a kill in the final set, with Linkhart putting the ball away for the match point.

The Bulldogs then traveled west Thursday, Sept. 19, to take on a new nonconference opponent, the Tri-County North Panthers. Having never played the Panthers, the Bulldogs were looking forward to a new challenge, and they delivered.

Winning in just three sets — 25–14, 25–17, 25–16 — the Bulldogs had every player contribute to the win. Tyler Linkhart started strong from the serving line, serving up eight straight points with four of those serves being aces. In the first set, every point the Panthers took were due to miscues or errors on the Bulldogs’ part.

The second set saw a bit more fire from the Panthers, but steady serving and passing by the Bulldogs kept them in control of the entire set.

The third set saw more great serving from Linkhart as well as Olivia Snoddy, who contributed six serves along with two aces in the set.

Come out to cheer on the Bulldogs as they compete to stay undefeated and win the Metro Buckeye Conference once again.

The boys varsity soccer team is heading into the end of the season with the possibility of winning the Metro Buckeye League title, coach Ben VanAusdale said this week.

With a conference record of 2–0–2, two wins, zero losses and two ties, the second-place Bulldogs play against current first-place-holder Troy Christian on Tuesday, Oct. 8, for the championship.

The final standing has come as something of a surprise for coach VanAusdale who anticipated the season to be a building year after the loss of a large group of graduating seniors.

Twelve freshmen are playing varsity this year, the coach said, adding that in his 17 years of coaching for Yellow Springs — 10 as assistant and seven as head coach — he’s never had a team with so many ninth graders.

“It’s been a fun, exciting, challenging year,” he said.

“As the season progresses, the team is meshing together,” he said. “I’m very proud of these young players who are playing like veterans.”

A 3–0 loss against Waynesville on Monday, Aug. 26, was still a game the Bulldogs should feel satisfied about its efforts, as Waynesville is a really good, Division II team with 13 seniors, VanAusdal said.

The Bulldogs went on to beat Legacy Christian 2–0 on Thursday, Aug. 29, and crush Emmanuel Christian 17–0 on Tuesday, Sept. 3.

Bryan is currently the second leading scorer in the conference, VanAusal said.

“I think we will be a very scary team as tournaments come around in October,” the coach said.

At this year’s Bellbrook Cross-Country Invitational, freshmen Cheyan Sundell-Turner and Josie DeWine and eighth grader Isaac Grushon had a big surprise in store for their coaches.

The Bellbrook course, with its multiple hills and creek jumps, is not known to be a fast course, and coming out of a tough training week, the coaches hoped that runners’ times would come close to last week’s competition performances.

Cheyan Sundell-Turner had something else in mind. After a fast 6:17 first mile, she kept her fast pace going throughout the race, placing second — outsprinted only by senior Ciara Colwell, from Leesburg-Fairfield — in new lifetime best time of 20:44 for a three-mile cross-country race.

Cross-country coach John Gudgel commented on the bus home that Sundell-Turner’s accomplishment is the highest individual finish of a YSHS female athlete at this meet in a long time, perhaps ever (we need to check this feat).

Teammate Josie DeWine did not compete the week before, as she had to fight off a bug. In Bellbrook, the freshman showed everyone that she is back, shining with a new personal best of 22:56 and placing in the top 10% in the tough competitor field.

McKinney Middle School runner Isaac Grushon has had good placements so far this year, continuing at Bellbrook with a personal best of 12:41 over the two-mile course that catapulted him into a fabulous sixth place.

Overall, the lady Bulldogs had a strong showing. Avery Reeder finished in 23:50, and Ive Tebe posted a 25:52 in the three-mile high school contest, while McKinney runner Tiger Collins finished her two-mile middle school/junior high race in 17:30.

The Bulldogs compete again on Saturday Sept. 28, at the Jim Murray Invitational held at the Clark County Fairgrounds in Springfield.