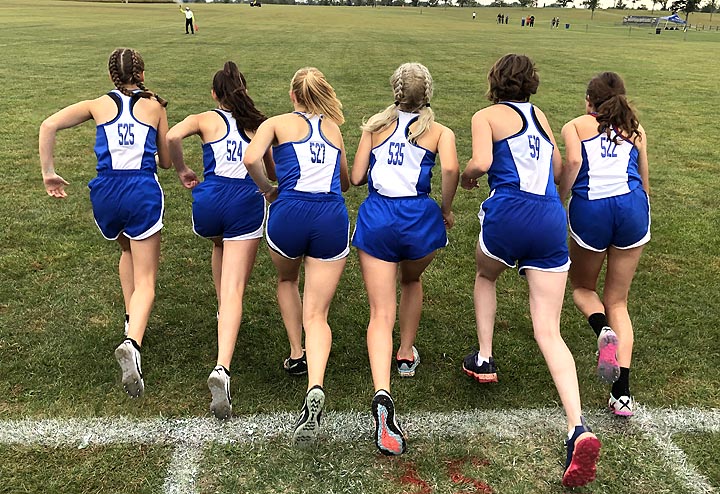 The McKinney Middle School boys team also had a strong showing as the runner-up in the 3,200-meter junior high race, with Isaac Grushon earning all-league honors.

Freshman Sundell-Turner ran a very smart, tactical race. In third place after two miles, she started attacking, ending up with a new personal best time of 20:24 and a second-place finish.

Freshman DeWine and sophomore Reeder pushed each other throughout the race and showed up together at the home stretch. DeWine once more showed off her speed and placed fourth in 22:23, coming close to her personal best. Reeder placed fifth, stopping the clock with a new personal best time of 22:29.

Senior Evelyn Potter showed a solid performance and contributed to the team’s success with her 11th-place finish in 23:37.

The standout performance of the night, however, was delivered by Tebbe, dropping a minute off her best time and placing 14th in 24:24.

Head coach Isabelle Dierauer said she was very pleased with the girls’ performances.

“I am very happy to see that the hard work the girls put in all season long has paid off,” she said, “I am looking forward to the upcoming district championships, and hope that competition luck stays on our side so that the girls’ efforts are rewarded with qualifications for the regional championships.”

Isaac Grushon has not been able to run in the past two races due to an injury, but  his fifth-place finish in 12:20 showed that his cross training has been very effective.

Jia Sundell-Turner also ran a strong race, placing 13th in 13:42. Samuel Trelawny-Cassity, who like Grushon had been sidelined over the past couple of weeks, returned to the race course with a 14th place in 13:44.

Tiger Collins peaked as well in the junior high girls race, delivering an 11th place finish in 17:10, her best placing this year.

“It was a joy seeing them run that hard, fighting for every spot,” Lewis said. “Almost the entire team ran a personal best; it was a very good day for the Bulldogs, and I am very proud of them.”

The Yellow Springs High School volleyball team finished their regular season with a trip to Pleasant Hill to take on the Newton Indians.

Experimenting with a different lineup, the Bulldogs wasted little time showing the Indians that they meant business when Olivia Snoddy served up nine straight points.

The Bulldogs won the first set easily, with all points for the Indians coming off Yellow Springs’ miscues or errors as the Bulldogs figured out their new positions.

The second set started with Tyler Linkhart serving up six points, two of them ace serves. Newton came out with more of a fight, but the Bulldogs’ Annlyn Foster was enjoying her new role as a right side hitter and put down three of her total of five kills for the game, giving Yellow Springs the win.

In the third set, it seemed the Bulldogs wanted to share the glory among all the team’s players, as Emma Ronnebaum and Aaliyah Longshaw were the sets’ top servers, serving for seven straight points each, with Ronnebaum delivering three aces during her run.

Foster finished the day with five kills, one ace, one assist and 11 digs, while Longshaw had one kill, two aces, three assists and 12 digs. Sophomore Angelina Smith had two kills and nine digs; junior Haneefah Jones had one kill and one assist; and junior Emma Ronnebaum had 16 kills, five aces, nice assists, one block and six digs.

The Bulldogs ended their regular season with an 18–1 overall record and a perfect season of 12–0 in the Metro Buckeye Conference. They begin tournament play on Saturday, Oct. 19, at 11 a.m., at Covington High School against the winner of the Jackson Center/Newton game played on Tuesday evening.

These athletes have had a great season. I encourage everyone to come out to support these Bulldogs in their post-season games.