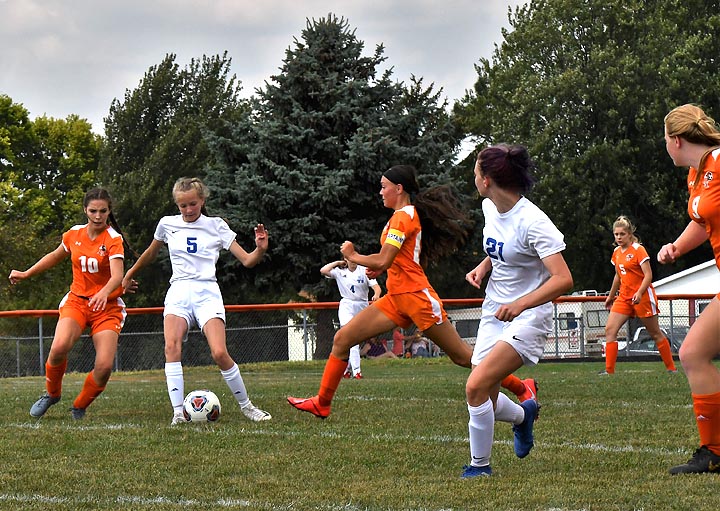 The varsity volleyball team played four matches last week, and in a nonconference outing suffered their first loss of the season.

On Monday, Sept. 23, the Bulldogs played a tough match against Clark County’s Southeastern High School, but came up short despite the hard work of two freshmen players, Josephine Zinger (1 ace, 4 assists and 3 digs) and Corinne Totty (3 blocks and 8 digs).

The team played tough against the Trojans, with Tyler Linkhart serving up 6 aces and 18 assists while putting down 13 kills and 4 blocks, along with sophomore Aaliyah Longshaw, who had 10 kills, 2 aces, 1 block and 15 digs. Olivia Snoddy had the most serve attempts, scoring 3 aces and 3 assists along with 14 digs.

Ready to get back to winning the next night, Tuesday, Sept. 24, the Bulldogs traveled to Jefferson Township to take on conference rival, the Broncos.

Zinger served up 12 aces along with 2 assists and 6 digs, while Totty had 1 kill, 1 ace and 5 digs. Linkhart also served 12 aces and added 17 assists along with 3 kills, while Olivia Snoddy came away with a season high of 17 aces and 10 kills for the night. Annlyn Foster had 7 aces and 2 kills, and Angelina Smith helped the team with 4 kills and 8 digs.

Determined to win the conference title again, the Bulldogs came out strong and never looked back.  In addition to winning this match in just three sets, Linkhart had 7 aces, 16 kills and 18 assists.

Smith and Longshaw had great serving runs, with 4 aces each, while Longshaw put down 10 kills and 3 blocks while digging up 9 balls.  Smith had 21 digs against the Eagles, while Foster and Snoddy had 8 digs each. The Bulldogs clipped the Eagles, wings winning 25–13, 25–13, 25–9.

Next up, early Saturday morning, Sept. 28, the Bulldogs hosted the Greeneview Rams.

Although the Rams are not a conference rival, the Bulldogs wanted revenge for losing a close match against the Rams last year. And they delivered their revenge quickly! Winning in just three sets 25–21, 25–10, 25–20, the Bulldogs played a great match.

Linkhart again led the team in kills, with 13, along with 4 aces, 24 assists, 2 blocks and 11 digs. Emma Ronnebaum helped the team by putting down 12 kills and 12 assists along with 8 blocks. Longshaw had another great showing, with 6 kills, 2 aces and 9 digs, while Smith had 6 kills, 3 aces and 28 digs.Snoddy served well with 3 aces, as well as 2 kills and 8 digs. Foster had an amazing serving game going, and while having 3 aces, her strong serves helped win about 20 points.  Foster also had 4 blocks and 16 digs.

The Bulldogs are now 15–1 overall (10–0 in conference play) with three regular season matches yet to play.

They will host Emmanuel Christian on Thursday, Oct. 3, for their Senior Night, at 6 p.m. A win will seal the Metro Buckeye Conference title for them for the second year in a row.

They will then host Legacy Christian on Tuesday, Oct. 8, at 7 p.m., for their last conference and home game of the season.

Post-season tournament play will begin for the Bulldogs the week of Oct. 14, when they will play at either Covington or Troy high school. Consult the YSHS website or app for up-to-date information on the locations and times of their games.

At the Jim Murray Memorial Cross-Country Invitational in Springfield, Saturday, Sept. 28, the Yellow Springs girls cross-country team showed their class, and proved with a fourth-place finish that they are competitive in a Division I-loaded field.

The team was led by stand-out freshman Cheyan Sundell-Turner, who missed her personal best time by three seconds, with a 20:47, and placed eighth in a highly competitive field.

Teammate freshman Josie DeWine improved her personal best time by 30 seconds and posted a 22:14. Avery Reeder contributed to the team with a 23:16, and seniors Evelyn Potter (23:58) and Ivy Tebbe (25:33) contributed with season best performances to complete the solid team effort.

“I am very happy for the girls. They work so hard and support each other in every practice and race,” head coach Isabelle Dierauer said after the race. “We just finished another very hard practice week, and I am really looking forward to their performances when we start backing off, once we go into the league and district competition phase of the season.