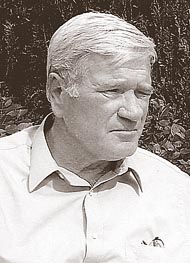 Wilfried Karl Keller passed away peacefully in his sleep on Sept. 26, 2019, at Hospice of Dayton after a long battle related to congestive heart failure. He was born in Rheydt, Germany, on Oct. 11, 1937, to Wilhelm and Helga Keller.

Wilfried is survived by his wife, Annemone (Kreisel) Keller, of 52 years, all of which were spent living in Yellow Springs. They have two children, Corinna and Andreas, both graduates of Yellow Springs High School.

Corinna lives in Miami Beach, Fla., with her husband, Joaquin Heras, and two children, Anneka (16) and Joaquin Jr. (14). Andreas lives in Dexter, Mich. with his wife, Charissa, and their two children, Karsten (15) and Barrett (14). Wilfried is also survived by his brother, Wernhard, and sister, Ursula (Bussey), who live in Germany and England, respectively, along with many nieces and nephews.

Wilfried’s pride and joy were his children and grandchildren. He enjoyed visiting with them and would boast about them to anyone who would lend an ear.

Wilfried was dedicated to his career and his profession. He loved being an engineer and working to fix things, both at work, at home and for friends, family and neighbors, earning the name of “Mr. Fix It” by those who benefited from his gift.

After receiving his degree in engineering from the Krefeld Institute in Germany, Wilfried came to the United States as part of a work study program for young professionals with the Rose Polytechnic Institute in Indiana, where he then earned his master’s degree. In the short time there, he fell in love with life in the United States and jumped at the opportunity to stay in the States after being recruited by Morris Bean, of Morris Bean & Company in Yellow Springs. Wilfried enjoyed a successful career with Morris Bean for over 30 years and in 1992, moved to Bosma Machine and Tool Company, in Tipp City, and then to Applied Sciences in Cedarville before retiring in 2002.

Interestingly, he met his wife, Annemone — also a German citizen, who was in the USA working at NCR Corporation — at a party where guests said, “Hey, you should meet this German guy.” They fell in love, and shortly thereafter married in Rheydt, Germany, on June 2, 1967, before returning to Yellow Springs to settle and raise a family. While their initial intention was to return to Germany, their love for the U.S. and YS continued to grow and those plans got pushed out indefinitely.

Wilfried was happiest when he had a project to work on that involved building or repairing something. He took great pride in his garden and home and particularly enjoyed quietly sitting with a cup of coffee or glass of wine on his patio with friends and family. Wilfried loved the YS community and often referred to it as “Jolly Springs” to others, and especially family in Germany. He was an international ambassador to friends and family visiting the community; often inviting people to come walk in the Glen, go for a bike ride and then have an ice cream at Young’s. When he wasn’t enjoying life at home, he embraced traveling and especially loved visiting his native Germany. He was fortunate enough to have traveled to many exotic places with Annemone and visited every continent except Australia!

In lieu of a memorial, the family has planned a small, private celebration of life with family at home, enjoying the view of the garden he and Annemone so carefully cultivated and loved.