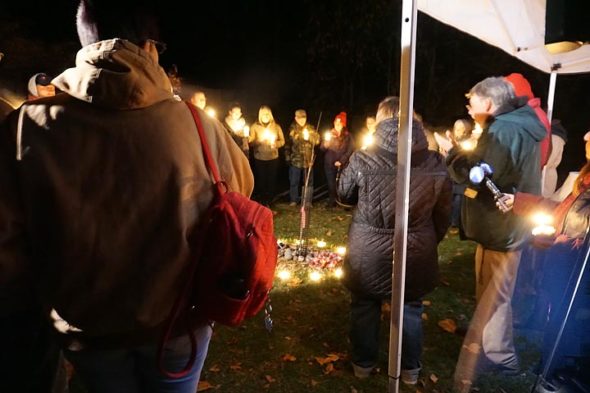 About 40 people gathered Saturday evening, Nov. 16, to remember Leonid “Lonya” Clark on his 27th birthday. Friends and family formed a candle-lit circle around a memorial tree planted in Clark’s honor just south of the Women’s Park on Corry Street. (Photo by Carol Simmons)

Area resident Zyrian Atha-Arnett is expected to be in court Thursday afternoon, Nov. 21, to plead to charges related to the stabbing death earlier this year of Yellow Springs resident Leonid “Lonya” Clark.

A grand jury last week indicted Atha-Arnett, 26, on two counts of murder and one count of felonious assault in connection with Clark’s death.

Greene County Sheriff Gene Fischer announced the indictments at a press conference Friday afternoon, Nov. 15, at the county courthouse in Xenia. Bond for Atha-Arnett, who was originally held on a $750,000 security, was set by the grand jury at $900,000, with the full amount required, Fischer said.

The announcement came a week after Sheriff’s deputies arrested Atha-Arnett on suspicion of killing Clark, a former schoolmate and friend since childhood. Atha-Arnett, who most recently was living in Enon, has been in custody at the Greene County Jail since his arrest.

Sheriff Fischer said Friday that the case has been assigned to Judge Michael Buckwalter, while Greene County Assistant Prosecuting Attorney David Hayes, who attended the press conference but did not speak, will lead the prosecution as chief trial counsel, Fischer added.

Counsel for the defense was not discussed, but Atha-Arnett’s family was this week soliciting financial help from two local faith communities to retain a criminal attorney.

On Monday, the defense filed a motion requesting that Atha-Arnett be allowed to wear street clothes and appear unrestrained at his Nov. 22 arraignment.

“Thousands of hours were put into this investigation,” which included “hundreds of interviews and multiple search warrants,” Fischer said.

County Prosecutor Haller said that many of the search warrants were related to cell phone records and internet usage.

According to court documents, investigators examined Atha-Arnett’s phone calls and text messages as well as his online search history, in addition to using phone location technology, to compile a timeline for what they think occurred in the days and weeks around Jan. 13, the last date Clark was reportedly seen alive.

At the time, authorities conjectured that his body may have been submerged in water or under ice through the winter, and that is why trained dogs didn’t find anything during a search of the Glen after Clark was reported missing in early February.

The preliminary autopsy listed multiple stab wounds as the cause of death.

The sheriff said investigators think Clark was killed at or near the location his body was found. In response to a question from the News, Fischer also said they think Atha-Arnett was solely responsible for Clark’s death.

Asked by the News about a murder weapon, the sheriff deferred to the county prosecutor, who said authorities were withholding some evidence-related information from the public.

The prosecutor also declined to speak about a possible motive, which he said would come out in the trial.

Haller said that charging Atha-Arnett with two counts of murder, a first-degree felony, provides different ways for the jury to consider the alleged actions.

One count charges that the defendant caused Clark’s death “as a proximate result of … committing or attempting to commit an offense of violence that is a felony of the first or second degree, to wit: Felonious Assault,” while the second accuses that the defendant “did, purposely cause the death of another, to wit: Leonid A. Clark.”

Each murder charge is punishable by a prison term of 15 years to life. No specified term is attached to the felonious assault charge.

The prosecutor said his office is not pursuing the death penalty.

For his part at the press conference, YS Police Chief Brian Carlson thanked the Sheriff’s office; the state Bureau of Criminal Investigation, which assisted in pursuing the case; and the village of Yellow Springs for tips and efforts in searching for Clark after he was reported missing in early February. He also offered condolences to the Clark family, who were in attendance, “for enduring what must be the most terrible reality a parent [could] ever face.”

In honor of that date, the Clark family hosted a public gathering Saturday evening at a memorial tree planted in Clark’s name just south of the Women’s Park on Corry Street.

About 40 people formed a candle-lit circle around the small pawpaw tree to sing “Happy Birthday to You” and share some stories about Clark’s life, while camera news crews from two area television stations filmed the gathering.

Clark’s father, Eric Clark, noted the clear, star-filled sky and suggested that everyone keep an eye out for shooting stars as part of the annual Leonid Meteor Shower, which was at peak this past weekend.

The family brought cupcakes for everyone, and family friends contributed hot cocoa and cider. A laptop computer showed video of Clark singing and playing guitar.

The memorial tree is one of two planted in Clark’s name. The other was recently added to a small group of trees on the Mills Lawn campus where three other members of Clark’s 2011 graduating class are also remembered. All died within the last three years.

Atha-Arnett had been a member of the same 2011 class from kindergarten through 10th grade. According to school district records, he withdrew before the start of the 2009–10 academic year.

Although he has lived outside the village in recent years, he and his extended family have many local ties.

As a boy, he was a member of the Cub Scouts, and he attended the Unitarian Universalist Fellowship with his father, Stacy Arnett, a Yellow Springs High School graduate.

Stacy, who acquaintances say had been living with his son in Enon after suffering a stroke several years ago, was a longtime business owner and manager in Yellow Springs.

Atha-Arnett’s uncle, Tony Arnett, served multiple terms on the Yellow Springs School Board and then Village Council before moving to Wisconsin more than a decade ago.

Thursday’s arraignment, originally announced for Friday, will be at 12:45 p.m. in Courtroom 2 of the county courthouse in Xenia, according to the prosecutors office  Wednesday.