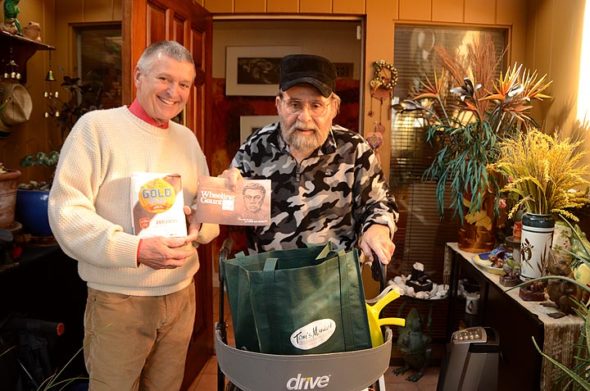 The Gaunt that keeps on giving

A village tradition since 1894, the annual delivery of flour and sugar to local widows and widowers continued again this year — a stipulation in Wheeling Gaunt’s will when he bequeathed the land that is now Gaunt Park to the village. Here, Yellow Springs Arts Council President Jerome Borchers delivered the pantry items (along with some info on the Wheeling Gaunt Sculpture Committee) to local widower, poet Arnold Adoff, in late December.

Adoff’s wife, famed local writer Virginia Hamilton, died in 2002. For him, the annual delivery represents another tradition; his family has been getting flour and sugar continuously for about six decades.

“Before it was me, it was Virginia’s mom, Etta Perry, on Dayton Street. She was getting it in the ‘60s,” Adoff said.

Asked about the destination for the staples, Adoff said he no longer bakes, so he donates it to family and friends who do.

“I don’t bake anymore because I eat everything I bake — even the mistakes,” he joked.

Adoff said he was grateful for the flour and sugar (both of the white variety), but suggested a possible move to whole wheat flour and a sugar substitute.

“There’s been a change in people’s health habits,” Adoff reflected, before adding, “But don’t put me on any committees.”

This year, the Arts Council helped make some of the approximately 75 deliveries as part of its efforts to raise awareness about its project to erect a life-size statue of Gaunt on public land later in 2020. So far, about half of the $169,000 budget has been raised, with a public event coming up in February, according to Borchers.

“The whole village is behind it,” Borchers said of the project. “People sending in anything from $10 to $1,000 would make the difference.”