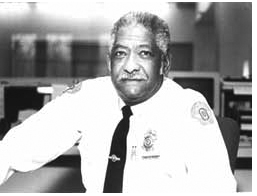 Long time YS Police Chief James A. McKee, for whom the James A. McKee Association — colloquially known as the McKee Group — is named. The Association gives an annual Founders Award to an individual or group who has performed charitable service to the community. McKee passed away Jan. 18, 2003.

The James A. McKee Association is currently soliciting nominations for the 2020 Founders Award for Distinguished Community Service. The award is intended to recognize outstanding voluntary service contributions to the Yellow Springs and Miami Township communities. It is given annually in memory of the association’s founding member, Jim McKee, who served as a role model for civic participation and leadership while encouraging community focused volunteerism.

Nominations may include any organization, group or individual, either living or deceased. Each nomination must consist of a typewritten statement of three pages or less and include the name of the nominator, nominee names, a narrative statement outlining the nature of the nominee’s volunteer community service and the reasons their service contribution should be recognized with the Founders Award. Nominations should include only uncompensated acts of community service that were performed by an organization, group or individual. In the case of a group nomination, all or most of the group’s members must have contributed their time and talents toward providing the service. Volunteer services for which the nominee is being nominated must have satisfied a significant community need, and provided a substantial contribution to the community, either through a single act or event or through consistent effort over a sustained period of time.

Nominations may be carried forward to succeeding years. The James A. McKee Association will in its sole discretion select recipients of the Distinguished Service Award. Both nominators and awardees are the honored guests of the Association at its annual Awards Banquet, with the names of awardees engraved on the Association’s Founder’s Award plaque, located in the Bryan Center.