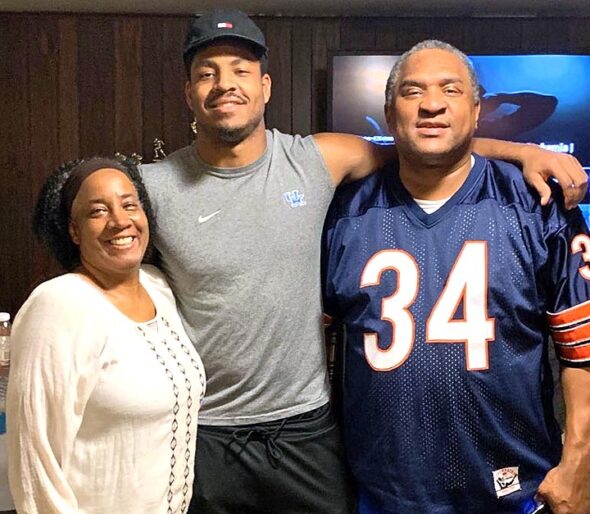 23-year-old Ahmad Wagner, a Yellow Springs native and current wide receiver for the University of Kentucky’s football team, was offered a contract by the Chicago Bears last month. Wagner will begin his professional football career with Chicago in the upcoming season. Here Wagner is pictured in the village with his parents, Teresa Bondurant-Wagner and Lee Wagner. (Submitted Photo)

Or maybe it was a combination of nature and nurture, growing up in a home where athletics played a significant supporting role — alongside the foundational values of family, faith and academics.

Wherever it came from, Ahmad Wagner’s athletic drive and discipline has landed him a spot on the roster of one of the most elite national professional football teams — the Chicago Bears.

Or “Da Bears,” as fans of the NFL franchise are known to proclaim.

Wagner, 23, got the call in April following the National Football League’s annual draft pick session, when teams take turns selecting promising collegiate players to go pro. While Wagner wasn’t named during the initial draft, the Bears offered the University of Kentucky wide receiver a contract as a free agent.

In a recent telephone interview from his student apartment in Lexington, UK’s home, Wagner said the Bears call wasn’t unexpected, as talent scouts had expressed interest in his going to play for Chicago next season. But it was still a thrill.

Scheduled to graduate from UK this spring with a degree in communications, Wagner is finishing up his coursework online, as are other students whose campuses are closed amid the COVID-19 pandemic.

But he came home to Yellow Springs to be with his family to wait for the call.

“They were all there,” he said of his parents, Teresa Bondurant-Wagner and Lee Wagner, and siblings, Ameer, Aamil and Amani, together in the Omar Circle home where he grew up.

Needless to say, his parents are elated.

“As parents we are so proud of Ahmad, as we are of all of our children,” the couple responded jointly in an email to the News. “When we heard the news on draft night we were thankful and relieved. We are especially proud of his working hard for his degree … and knowing he will have the opportunity to pursue a career as a professional athlete,” they added.

Teresa is a Yellow Springs native who was inducted into the Yellow Springs Athletic Hall of Fame as an inaugural member last year for her own sports accomplishments, while Lee has coached football at the collegiate level. Although the couple began their life together pursuing careers out of state, they chose to settle in Teresa’s hometown to be near her family and part of the community here, including involvement in Central Chapel AME Church, which has been an integral part of their family life.

“He is a good child of God, nurtured well at Central Chapel AME,” they said of Ahmad’s spiritual grounding.

The young man’s faith is reflected on his Twitter page, which features the Biblical passage, “I can do all things through Christ who strengthens me.”

Ahmad said he played every sport he could growing up here — swimming with the Sea Dogs, Little League baseball, Pee-Wee football, recreational basketball and soccer, before joining school teams, with track added in, when old enough.

“I enjoy competition,” he said. “I’m competitive and I love competition any way, shape or form.”

Growing to a height of 6´5˝, Ahmad turned his athletic focus as he went through school not on football, however, but basketball. And the chance to play basketball for a Division I high school and work toward a possible college scholarship led him to enroll as a freshman at Wayne High School in Huber Heights, after going through Mills Lawn and McKinney Middle School here.

At Wayne, he was a starter on the championship-winning squad, deciding in his senior year to go out for the school’s football team in addition to hoops play. Sports writers reported that on the field that fall he caught 58 passes for 1,028 yards and 17 touchdowns, helping lead Wayne to a state championship game there as well. The multi-sport athlete also ran track that year, for fun.

After a couple years in Iowa, however, he started thinking again about football.

“I loved my time there (Iowa), but I didn’t want to have any regrets,” he said about wondering what might have been possible on the gridiron at UK. He finished a third year of basketball at Iowa, and transferred to UK on a renewed scholarship offer, with two years of eligibility.

While he counts himself as hyper competitive, he said he likes channeling that drive within the structure of team sports.

“I enjoy putting everything you have into something and winning with your team,” he said. “You form relationships, and you want to see everyone succeed.”

With COVID-19 limiting most current activities, Wagner said he’s had to start building a relationship with his new team virtually.

“I’ve been able to meet and talk to some of the coaches online,” he said.

And he’s also working on staying in shape with an individual calisthenic regimen while gym facilities are closed.

He said he’s grateful for family and community support.

“My community in Yellow Springs has helped me grow into the person I am today,” he said.

And he gives special recognition to his father, Lee, who coached many of his childhood teams.

“I look to him for every major decision,” Ahmad said of his dad, adding that rather than telling him what to do, Lee helps his son figure out what he wants and how to achieve it.

Given the uncertainty of life amid COVID-19, including the status of professional sporting events next fall, family support is vital, Wagner said.

But in the short term, Wagner is looking forward to moving to Chicago once the academic year has ended, and starting a new life chapter as a professional player with the Bears.