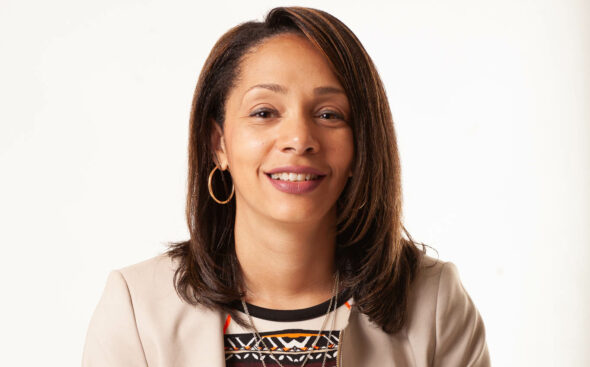 During a special online meeting of the Yellow Springs school board Wednesday, May 20, the board unanimously approved a two-year contract for Michelle Person, who will be coming to the district from Cleveland schools effective Aug. 1.

Person, currently the principal at Cleveland’s Charles A. Mooney Elementary School, joined the teleconference-style meeting from her home.

“I am super excited to be here,” Person said.

Board members enthusiastically welcomed Person, who will be filling the vacancy created by the impending departure of longtime Mills Lawn Principal Matt Housh at the end of the school year. Housh announced in March that he had accepted an administrative position with Huber Heights Schools for the 2020–21 academic year.

“We are thrilled to have you,” School Board President Steve Conn told Person after the vote.

“We are so lucky to be able to grab her and bring her into the Yellow Springs family,” Holden said.

In a prepared statement released last week, the superintendent said, “The district has found a highly qualified principal in Michelle Person,” adding, “She brings a wealth of experience to the position.”

A graduate of Skidmore College and Capella University, Person began her career with Teach for America, spending time as a teacher at Citizens Academy, KIPP Journey Academy and Cleveland public schools, before transitioning into administration, according to the Yellow Springs district office. She served as a principal of operations and head of school at Lion of Judah Academy and Mosaica Education respectively, before returning to Cleveland Schools as an elementary principal in 2015.

“Education is my passion,” Person said in the district press release about her hiring. “I believe everyone deserves the opportunity to receive a quality education, and I am thrilled to be able to continue doing what I love in the Yellow Springs community.”

According to the district, Person was selected from a field of 27 candidates following an interview process that included virtual and in-person interviews with teachers and parents as well as a presentation on how to support strong academics and inquiry-based/project-based learning in a blended, or virtual, environment, given the current impact of the COVID-19 pandemic.

Her starting salary, according to district records, will be $108,174 a year.

In a phone interview this week, Person said she couldn’t be happier about joining the Yellow Springs team, and she’s looking forward to getting started — with whatever the school day looks like when the new academic year begins.

In fact, she came into town this past weekend to walk around a bit and show her partner and youngest child the school where she’ll be working.

The mother of three — a son, who is graduating high school as a member of the class of 2020; a daughter, who will be a high school sophomore next year; and a three-year-old daughter — Person said she was already preparing to move to the Dayton area, where her partner is a real estate developer, when she saw an announcement about the Mills Lawn vacancy.

“So, I applied,” she said. The family will live in Beavercreek.

While Person believes she found her true calling as an educator, she went off to college with the intention of becoming an actress. At Skidmore, in Saratoga Springs, N.Y., she studied psychology and theater, and dreamed of going to New York City.

Taking a position with Teach for America immediately after getting her bachelor’s degree was actually part of her plan to get to the Big Apple.

“I didn’t want to be a poor struggling actress when I moved to New York City,” she said, so she chose a Teach for America placement in Newark, N.J., thinking she could get some work experience and still be a short train ride to Manhattan.

“And I fell in love with education,” she said.

She stayed with Teach for America for four years and then returned to Ohio to continue in teaching and eventually school administration. She also went on to earn a master’s degree in education as well as principal licensure.

The arts remain important to her, too.

In recent years, she has written five children’s books and launched a related multimedia effort called “Just Like Me,” which features stories involving diverse characters.

Person said that even though she’s an educator, she hadn’t been fully aware of the under-representation of children of color in children’s literature until her librarian brother-in-law showed her some statistics.

According to the School Library Journal, citing 2018 publishing statistics compiled by the Cooperative Book Center at the University of Wisconsin-Madison, children’s books characters fall into the following percentages: 50% are white, 27% are animals or other nonhuman entity, 10% are African/African-American, 7% are Asian Pacific Islander/Asian Pacific American, 5% are Latinx and 1% are American Indian/First Nations.

Person has two book series — one meant strictly to entertain and one to teach and “share stories that don’t get covered in elementary school,” she said. The “Just Like Me” enterprise — online at readjustlikeme.com — features works by other children’s authors as well, and also offers workshops and teacher training.

In addition to her work, writing and being a parent, Person said she remains “a huge theater buff.” She also enjoys reading, shooting pool and bike riding.

In coming to Yellow Springs, she’ll be transitioning to a slightly smaller school. Mills Lawn has about 350 students, 100 fewer than Charles A. Mooney, where Person spent the last four years.

While she’s looking forward to getting started, she said some creative planning will be needed for the opening of the new school year.

She said the physical aspects of her interview here, when she came to Yellow Springs and met with members of the school community,  made her question the feasibility of students returning to school in the fall under the guidelines currently proposed by the state, such as wearing masks and adhering to distancing measures.

“We sat in a room 10 feet apart, wearing masks, for 45 minutes, not moving [around],” she said. “It was so [physically] uncomfortable. I can’t even imagine what it will be like for little people. I can’t imagine asking a 5-year-old to do that, to keep a mask on, to sit in one place.”

She said she wonders if a return to the classroom, even just part time, isn’t realistic yet, though she said she’ll work to follow the state’s instructions.

To keep students healthy and to make their time in school meaningful means “we will have to be very creative,” she said.