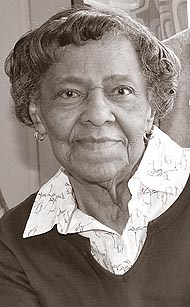 Isabel was born in Yellow Springs on Dec. 4, 1925, to Lewis and Della Baber Adams, the fourth of six daughters. She was the last living daughter of one of the village’s early families.

Isabel walked at the age of nine months, which was a harbinger of things to come. Quick-witted and facile of mind, Isabel was not one to sit still and let life go by.

And she never did. She went on to protest, lead and advocate. She became an activist and a proud and caring pillar of the village of Yellow Springs. Isabel was often on the forefront of change and progress.

Born to direct descendants of the Conway Colony, a group of freed slaves who were brought to Yellow Springs in 1862, Isabel was a fourth generation Yellow Springs citizen. The Conway Colony helped build the village community and founded the First Baptist Church of Yellow Springs where Isabel was a lifelong member. She enjoyed serving as the church historian, as chair of the deacon board, as music librarian and choir member and as a member of the missionary society. Her commitment and lively participation at church were an example of her dedication to community.

Isabel graduated from Bryan High School. In high school she led a protest against the recitation of the Pledge of Allegiance to show that African Americans did not feel protected by it.

In 1956, she and other local citizens organized to successfully hire the first Black teacher in the Yellow Springs school system.

Following in the footsteps of her activist father, she was a participant in many protests including the famous local Gegner Barbershop anti-discrimination case, the March on Washington and anti-Vietnam War activities.

As was often true for serious activists in the ’60s, Isabel was placed on a watch list for subversive activities.

When Isabel graduated from high school, she was hired to be a linotype operator at the Antioch Bookplate Company, which later became Antioch Publishing. To learn her craft, she went to New York to study at the Mergenthaler Linotype School in Brooklyn. She worked at Antioch Publishing as a linotype operator and then ran a large automatic press. Every Wednesday, she printed the Yellow Springs News. She moved on to become manager of the bindery and shipping department, where she remained for over 40 years. In time, she was elected to the company’s board of directors.

In 1944, Isabel became a member of the celebrated Victorettes, a group of young African American women who took on local community service projects and entertained with vocal concerts and plays during the war.

Isabel loved her community and was fiercely proud of Yellow Springs. In her 90s, she remained an active outspoken member of the community. She was an editor at The 365 Project, receiving their Civil Rights Trailblazer Award, along with local historian and friend Phyllis Jackson. In 2019 she was awarded The Martin Luther King Community Peacemaker Award and was recognized by the local public schools with their Hidden Figures Hall of Fame Award.

Up until the week before she passed away, you could spot Isabel walking, stick in hand, as she delighted in the sights and scenery of her town. She loved her family, her garden, baking her trademark pies and tending to her birds and other local wildlife that made their home in her yard. She had names for all the animals, like Radar the squirrel. This summer, her last, she was thrilled to finally grow the glorious tomatoes she had attempted to cultivate for years.

Isabel was preceded in death by her husband, Cecil; her parents, Lewis and Della Baber Adams; and her sisters, Genevieve Rivers, Lois Edwards, Charlotte Jordan, Naomi McKee and Evelyn Hill. She leaves behind to celebrate her legacy her daughters, Lynda and Annette; and granddaughter, Malika Carter, of San Bruno, Calif.; along with several nieces, nephews, friends and neighbors.

Funeral services will be private, due to COVID–19. Pastor is the Rev. William Randolph. Arrangements entrusted to Porter-Qualls-Freeman Funeral Home.

UPDATE: Isabel’s family is now planning a memorial gathering to be held at a later date. The finalized date will be announced in the News.