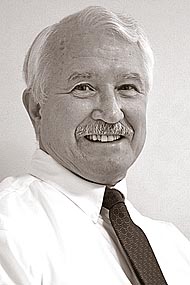 Some of Louis’ ancestors were Vikings, both Danes and Celts, and we always saw him that way! He loved the outdoors and adventures, loved kayaking and boating on rivers and lakes, soared over the west coast in his private plane, loved skiing, mountain biking, bow and gun hunting, and exploring our world. He was a volunteer fireman from 1970 to 1977 and donated over three gallons in blood drives. Sadly, after running the gamut of life’s experiences, with his wife by his side, Louis died Aug. 5, 2020, from heart failure and pancreatic cancer — the same illness that took his father at the same age.

Louis was born Aug. 23, 1943, in Trona, in the California desert in Searles Valley. He graduated with honors from Trona High School in 1961, after being very active in the marching band, football, basketball and track — Louis set a school record for the 880-yard sprint. In his final days, when asked what had been a memorable event in his life, he replied, “When my high school basketball team won the state championship!”

Louis went on to receive a Bachelor of Science degree in electrical engineering from California State Polytechnic University in 1966. After graduation, Louis married Carole Ford in Trona, and they moved to Seattle where Louis worked on Minuteman missiles with Boeing Aircraft; he was excused from the Vietnam draft because he was a legitimate rocket scientist! He received a master’s in electronic engineering from the University of Washington.

When the missile contract ended, Louis found new work with Keytronic, a startup computer company in Spokane. He designed and patented a capacitive switch for computer keyboards for them, which led to $100 million per year in sales. In 1977, Louis became vice-president of engineering for ISC Systems and directed development of on-line cluster terminal systems for banks.

In 1986, Louis married Jane Herring and moved to Output Technology Corporation, which produced high-speed impact printers, where he launched three new products and won a government contract worth $50 million. He was president and CEO 1993–2000 and increased sales from $4 million to over $30 million per year, selling the printers in several countries around the world.

Louis is lovingly survived by: his children, Jenniffer Geller and husband, Marc, Jilliann Postforoosh and husband, Daren, Evan Sims and Hayley Sims; grandchildren, Levi and Maverick Geller, and Roman and Mia Postforoosh; his brother and wife, Richard and Cindy Sims; his nieces, Tiffany Sims and Serrina Sims; and his wife, Mary Sims, and her daughters, Valerie Kosheleff, Alisa Kosheleff, and Demi Benson.

To honor his love of nature, spirit of adventure and kind heart, Louis’ ashes will be scattered in a natural cemetery in Yellow Springs, on a favorite mountain near Spokane and buried with his parents and brother in Trona. He had lived in Yellow Springs, Ohio, for 17 years, surrounded by nature and loving people.

One Response to “Louis Edgar Sims”