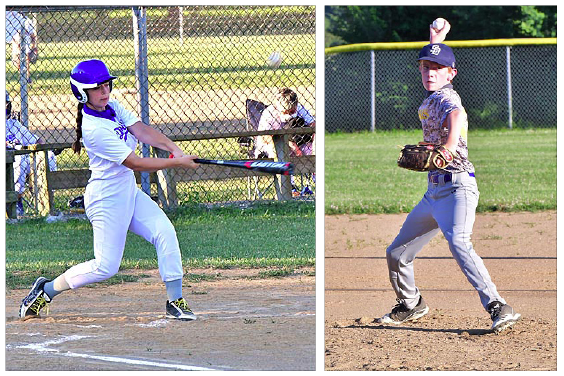 On Wednesday, July 29, the Tom’s Market Reds emerged as the Major League division champions. Pictured above are Violet Babb, left, of the Adoption Link Dodgers, swinging for the ball in a mid-July game, and Hazen Vanmeter, of the Peach’s Padres, pitching. (Photos by Kathleen Galarza)

On Wednesday, July 29, the Reds defeated the Peach’s Grill Padres 7–6. The Reds built an early lead, with a base hit by Sam Linden bringing home Kian Rainey to make the score 6–0. The Padres mounted a comeback as Brady Baker stole home in the fourth inning and Cal Freeman added a steal of home in the fifth. Jake Ortiz-Thornton pulled the Padres to within 7–6 on a three-run homer in the sixth, but Caleb Derrickson finished the victory with a strikeout to end the threat. Rainey led the Reds with three innings pitched and five strikeouts.

On Saturday, Aug. 2, the Reds took on the Adoption Link Dodgers and earned a 7–5 victory to clinch first place. The Dodgers started the scoring with a base hit by Lucas Dunn to score Isaac Grushon. After trading scores, the Dodgers pulled ahead 4–1 on a steal of home by Mateo Basora and another base hit by Lucas Dunn. The Reds rallied with base hits by Sam Miller and Sam Linden, with Linden coming around to score on a steal of home to make the score 4–4. After the Reds scored on a bases-loaded walk, the Dodgers tied the game as Lili Herzog scored on a base hit by Mateo Basora. The Reds pulled ahead once again on base hits by Linden and Noah Diamond to take the lead, 7–5, and Miller struck out the side to complete the victory.