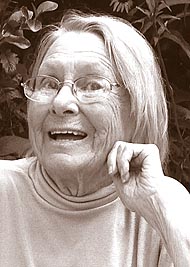 Pat Ronald spent most of her life looking after the health of others as a physician at Dayton Children’s Hospital. Ironically, she had to endure a series of maladies of her own throughout her working and retirement years, and sadly, at the age of 84, they finally overcame even her fierce fighting spirit, and she died peacefully at Hospice of Dayton on Sept. 2, 2020.

Until the end, she maintained a positive outlook on life, invariably accepting her own several bouts of cancer and late-life scoliosis as something to be dealt with so that she could move on with her work and the many other things that were important to her.

Though a resident of Dayton, for decades Yellow Springs has been her home-away-from-home — she appreciated being part of a socially provocative community and it’s where she met most of her friends.

Pat graduated from medical school at the University of Liverpool in the UK. In 1960, she married her husband, Terry, who was a fellow student at the same university. In 1964 they moved to Dayton, where Terry’s postgraduate career took him to the Air Force Materials Laboratory at Wright-Patterson. Pat spent most of her career at Dayton Children’s Hospital, until retirement in 2001. She specialized in pulmonary medicine, pediatric cardiology and especially the treatment of cystic fibrosis.

In addition to her medical career, Pat was active in several pastimes that satisfied her literary and musical nature. She was a lover of classical music and was a member of several choirs, most notably for 30 years or more with the Yellow Springs Community Chorus, and more recently with Sokolitse, a local singing group that learns and performs Balkan music. She was involved with Center Stage Theatre over many years, in acting roles as well as designing costumes. She was a founding member of a Shakespeare reading group for several decades that started in Yellow Springs and has continued almost weekly to this day. She was a writer of short stories, poems and at least three completed but as-yet-unpublished novels that are based on English historical characters and events. Some of her stories have been published in literary magazines. She was a long-standing member of the Dayton Playhouse play-reading committee that reviewed hundreds of submissions each year for its annual festival of new plays, and she was actively involved in productions for the Dayton Theatre Guild over the years.

She will be missed by a wide variety of people who knew her through her medical work or her artistic endeavors. Though they lived in different homes for many years, she is truly missed by Terry — her spouse, her constant friend, and in her later years, her helper, chauffeur, shopper and general on-call support system. Though Pat had no children of her own, she always looked forward to visits back to the UK to visit her two sisters and to see her many nieces and nephews.

Pat was a fighter for the welfare of others, devoted to her medical work, proficient in several artistic fields, a lover of all things literary, willing to forcefully debate with others in favor of what she regarded as justice in society, and above all was gentle, kind and generous.

One day, when life returns to normal, her ashes will be scattered over the beloved moors of her ancestral home in northern England — the land of green rolling hills, drystone walls, small stone-built cottages and meandering flocks of sheep.

If so inclined, memorial contributions may be made in Pat’s name to Dayton Playhouse or Hospice of Dayton.

One Response to “Patricia Ronald”