After a storm-delay of almost an hour, the Bulldogs took the field. Senior tri-captain and goalkeeper Shaylee Smith won the toss and the Bulldogs kicked off the game and the season. Junior Aaliyah Longshaw, senior Annlyn Foster and freshman Nevaeh Smith took the ball forward. With strong support from junior Kira Hendrickson and senior tri-captain Natalie Galarza in the midfield, they kept the ball in front of the Middletown goal for most of the first half, but were unable to find the back of the net.

The second half of the game revealed more evenly matched teams with back and forth play. After a Middletown foul in the penalty box, Yellow Springs was awarded a penalty kick, and freshman Nevaeh Smith put the Bulldogs on the scoreboard. The final score was 3–1. Junior Alyss Nichols played a strong defensive game, which included a goal line save.

“We played hard, and I was proud of the team,” head coach Jonina Kelley said after the game. “It was the first time that we had been able to be together as a full team, and I am excited about the rest of the season.”

The Bulldogs then had a short respite before their second conference game against Legacy Christian on Sept. 1. Due to numbers and early injuries, both teams agreed to play nine players each instead of 11. The Bulldogs played hard and junior defenders Carina Basora, Myrah Burton, Alyss Nichols and sophomore Halee Sparks held off a determined Legacy offense. Defensive midfielder and junior tri-captain Tahlia Potter had a second half goal line save. The reduced number of players eventually wore down the team and the final score was 3–0 in Legacy’s favor.

An intense week of games followed, beginning Saturday, Sept. 5, against Newton High School. The Bulldogs started slow, and a disciplined Newton team put three quick goals in the back of the net. Yellow Springs regained possession, and Potter and Galarza combined with junior Sophia Lawson to push the ball forward for Nevaeh Smith and senior Bre Wallace to run onto. This combination produced opportunities on goal, but the final score was 6–0 in favor of Newton.

On Tuesday, Sept. 8, the Bulldogs lost to Troy Christian on the road, but played an incredibly strong game, without substitutes and often playing with fewer players on the field than the Eagles. Goalkeeper Shaylee Smith had 19 saves and her sister, Nevaeh Smith, had six saves in goal, popping two over the net.  Defender Myrah Burton helped hold down the defense with a goal line save. Despite their best efforts, the final score was 6–0 in favor of Troy Christian.

While playing Catholic Central at home on Thursday, Sept. 10, sophomore Eliza Minde-Berman closed down the attack in the middle while creating some promising offensive opportunities. The team fought hard in another nine-versus-nine player game, with defender Carina Basora saving a ball right on the goal line. The Bulldogs were able to finish the game 1–5 after Navaeh Smith scored on a penalty kick in the second half.

The Bulldogs next face Dayton Christian at home on Thursday, Sept. 17, at 5:30 pm.

The Bulldogs have already gone up against some of the best teams in the state, including the No. 1 ranked Troy Christian and last year’s top ranked Ottawa Hills, out of Toledo.

Van Ausdal believes that playing the better teams helps strengthen his players’ abilities, and that by the time they get to tournament play, they’ll be a formidable force.

“We’re going to be a very dangerous team,” the coach said this week.

Right now, the squad is showing its youth, Van Ausdal said, with many of the 21 players coming from the high school’s sophomore class. Showing leadership are the team’s three seniors: Kaden Bryan, who was named all-state last year, Finn Bledsoe and Cedar Palmer.

Standout players include Bryan, with 14 goals and four assists so far this season; sophomore Eli Eyrich, with 11 goals and eight assists; and sophomore and first-time goalie Krishan Miller, who is tied for the most saves in the conference with 49 and counting.

“This is a really, really good group,” Van Ausdal said. They’re going through “a learning curve” right now, but the coach anticipates they’ll continue to come together as the season progresses.

On Friday, Sept. 4, the Yellow Springs High School and McKinney Middle School boys and girls cross-country teams competed in their first meet of the year at the inaugural Troy Christian Cross Country Invitational. 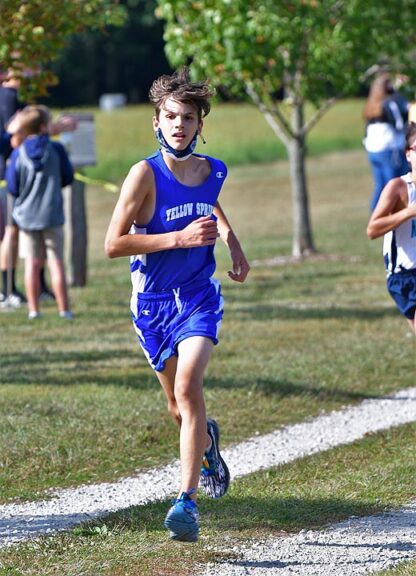 Of the 22 local students participating in this fall’s cross-country program, 16 competed in the season-opening meet. Eleven Bulldogs were running in their first-ever competition.

The middle school boys were led by seventh grader Ted Horvath who, in his first-ever race, gutted out a 10th place finish; he was complimented by Kyle Johnston (27th), Noah Diamond (31st), and Isaac Lewis (47th), closely followed by Evan Galarza, Kanon Flatt and Evan Sluss. Javon Obringer and Jia Sundell-Turner will also be competing for the McKinney boy’s squad this year.