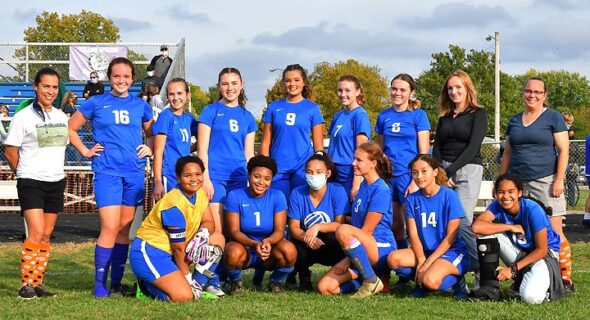 The trio of Tiger Collins, Lili Herzog and Sasi Johnson-Drees displayed exceptional fortitude and strength in the middle school girls race. Collins ran a season best time of 17:00 (eighth) while Herzog, in only her second race, came in 14th, followed closely by Johnson-Drees in 15th place.

All of the Bulldogs will compete in the season-defining Metro Buckeye Conference league meet Friday, Oct. 16, beginning at 4:30 p.m., at the Elvin R. King Cedarville University Cross Country Course. According to Coach Isabelle Dierauer, the runners’ performances the past few weeks are a strong indicator that the Bulldogs are ready for a breakout performance at the league meet.

In the annual elementary school one-mile Bulldog Chase, which also took place on Saturday, the first-place trophy winners were Sierra Sundell-Turner among the girls and Will Oberg among the boys. A total of 15 elementary-school-aged runners started and finished the race.

The YSHS girls soccer team finished their season on Saturday, Oct. 10, with a 3–2 win against National Trail.

Junior Tahlia Potter scored two of the team’s goals — her first, a nice touch within the first two minutes of the game, was assisted by sophomore Halee Sparks, and her second was the unassisted game winner in the 70th minute, after she dribbled the ball 60 yards and through the National Trail defense.

Senior Natalie Galarza topped off her career with a beautiful shot right outside the penalty box in the first half. That goal brought the bulldogs into the lead and was assisted by Potter. Seniors Annlyn Foster, Shaylee Smith, and Bre Wallace, junior Sophia Lawson and sophomore Sparks also had shots on goal. And while junior Aaliyah Longshaw did not play in the final game, she had a strong season.

In addition to having several strong defensive plays, sophomore Eliza Minde-Berman made her debut in goal for 20 minutes while Smith took the field. Minde-Berman was kept busy and provided 40% of the saves for the game.

This was a challenging season for the Bulldogs, as the team struggled to field a full team for about half of their games, especially after several injuries. Junior Kira Hendrickson suffered an injury during the first game of the season and was unfortunately unable to play the remainder of the season. Ten days before the team’s final game, freshman Nevaeh Smith broke her ankle during a scrimmage. Despite these hurdles, this team was always inspiring — they hustled, played hard and never gave up. Congratulations on a wonderful season, ladies!