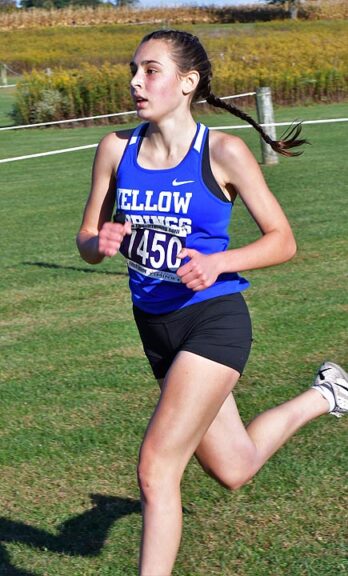 For the second year in a row, Cheyan Sundell-Turner has qualified for regional cross-country competition. The sophomore earned her spot with a seventh-place finish, in a time of 20:29, at the southwest district cross-country meet Saturday, Oct. 24, at Cedarville University. Sundell-Turner will run at 10 a.m. at Troy Memorial Stadium on Saturday, Oct. 31, with the opportunity to advance to the state meet.

In the same district competition, the Bulldog boys squad finished in 10th place out of 15 teams that began the race. Leading the Bulldogs was sophomore J.P. Anderson, who finished in 47th place followed by a tight pack of Bulldogs. Senior Gideon Naziri ran a career best time of 21:53 (58th), ninth grader Jack Horvath has shown flashes of brilliance the past two weeks and finished 60th, Maddox Flatt was closely behind (61st), senior Rilo Oberg, running in his last race, was 62nd, with promising ninth graders Kael Cooney (63rd) and Malik Booth (65th) running season best times.

Out of the 24 teams in the Southwest District’s three sections, Yellow Springs went into tournament play seeded fifth.

He said the win was particularly sweet because the Bulldogs lost to Miami East during last year’s tournament, after winning against them during the regular season.

The game’s goals all were scored during the second half, the coach said. Kaden Bryan scored the first, with an assist by Eli Eyrich; Isaac Grushon netted another, with an assist by Ben Espinosa; and Bryan landed the third, with an assist by Cedar Palmer. Goalkeeper Krishon Miller secured 10 saves during the game, as the defense held the Vikings to a lone goal made in the final six minutes of the match.

“Our goal was to make it to the finals, and we’re there.”

Thursday’s game begins at 7 p.m. at Trotwood-Madison High School. Call YSHS about tickets, as they won’t be available at the gate and must be purchased in advance, VanAusdal said.