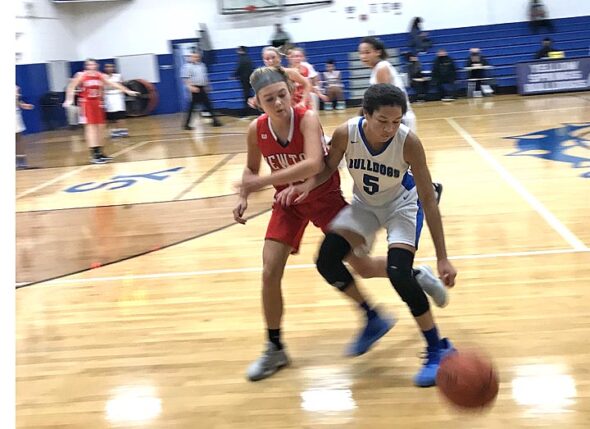 Smith scored 21 points in the season opener against Newton at YSHS on Saturday, Nov. 21, and 31 points against Graham on Monday, Nov. 23.

Against Newton, Yellow Springs started down 11–3 until Smith hit back-to-back three-pointers with a minute left in the first quarter. The Bulldogs were down 11–9 at the end of the first. In the second quarter, they started to play better and took a 21–19 lead into halftime. The third quarter seemed to be the difference as YSHS played some great defense and outscored Newton 18–3 in the quarter. They cruised in the fourth and won 57–33. It was new Head Coach Nick Minnich’s first win of his career.

The team then hosted Graham on Nov. 23 and won 45–34, moving to 2–0 on the season. In addition to her 31 points, Smith had six rebounds, five steals and four assists. Also playing well were Totty, with seven points, five rebounds and five steals, and Jones, with eight rebounds.

The Bulldogs were led by DeAndre Cowen, who threw down two dunks in the first quarter against Bradford. Malik Thomas, Nate Curtis III and Eli Eyrich also played well in the opening quarter, with crisp passing and good rebounding. Javas McNair showed promise blocking a few shots, but needs to be stronger.

The quarter Dixie tried to run up and down with us saw great success for YSHS. The Bulldogs were fast paced and ran the Greyhounds down. The speed of Cameron Harris, Ethan and Jason Knemeyer, along with Cowen, Eyrich, Curtis and Thomas, was too much for Dixie to handle.

Another quarter against Bradford saw Harris, the Knemeyers, Josh Clark and J.P. Anderson play the whole quarter and play well. Harris hit three three-pointers in succession, and the team held Bradford low in their scoring effort.

The junior varsity also played well. New additions to the Bulldogs’ program include Jaymon Lange, Phillip Kintner, Isaac Grushon, Antonio Chaiten, Derek Reed, Isaiah Search and Sam Miller. They team up with second year players Liam McClean and Lucas Tumblison. It is very exciting to have this many young men in the program, and they are all wonderful kids who will represent the Village in the best way possible.

The YSHS bowling team’s first two matches of the season were canceled, as both opponents suspended their season due to COVID-19. The team played its first match on Monday, Nov. 23. Results will be in next week’s News.