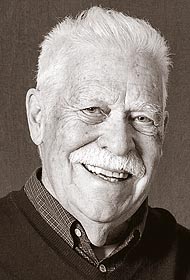 Raymond  J. Werner, age 81, of Yellow Springs, passed away peacefully on Monday, Dec. 21, 2020, at Miami Valley Hospital with his wife, Elaine, and his daughter, Jessica, by his side.  He was born March 7, 1939, in Cleveland, Ohio, the son of Raymond J. Werner Sr. and  Eleanor Kelly Werner. Ray lived a life of love and commitment to family, learning many skills of living and resilience from his parents and extended family. He learned to love the outdoors and the joys of fishing at an early age through annual trips to the wilds of Canada and fishing on Lake Erie.

Ray learned the importance of creating a home, and patience and frugality, by helping his parents build their own home while living in it during his early years. He attended Cleveland State (Fenn College) and graduated with a degree in electrical engineering. He later received his MSA from Central Michigan.

Ray began working for the Air Force out of college and continued for 42 years of service to our country as an analyst and branch manager in highly classified positions at Wright-Patterson Air Force Base.  Ray’s commitment to helping our country maintain a position of détente exemplified his beliefs in the inherent goodness of humanity and communicating about our differences as a way to gracefully accept one another. Ray will be remembered as a man of integrity, loyalty and honor by all who knew and loved him.

While he faced numerous life challenges, Ray always met them with faith and commitment.  He encouraged his children and grandchildren to be the best they could be, and loved them with all his heart.  Ray was a strong advocate for women’s rights and supported his wife in her career. He raised strong daughters and granddaughters and was committed to environmental issues and the rights of the mentally ill.

Ray found great peace and happiness with a fishing rod in his hand. He experienced a lifelong passion for spending time at Lake Erie. In later years, he found much joy spending his winters fishing and camping with his wife and friends in Big Pine Key, Fla.

Ray was a true family man and provider. His devotion and willingness to meet the needs of his family was always on his mind. He enjoyed his quiet time at home and around the Village of Yellow Springs, but he also had an adventurous spirit that led him to travels in Alaska, Switzerland, Spain and Oregon. Wherever his family went, he would visit and support them while exploring the geography and history of new lands and people.

Raymond is survived by his wife, Elaine Jelly-Werner;  his children, Christopher Werner, Lizbeth Dretzka (Phil), Monica Hasek (Robert) and Jessica Werner (Javier Jaén Serrano); grandchildren, Sophia Dretzka, Olivia Hasek and Evelyn Werner-Jaen; sister, Kathy Elster; and many other loving friends and family members. He was preceded in death by his parents and his brother, Tom Werner.

A memorial service will be held at a later date when the family and friends can safely gather. Memorial contributions can be made to PLACES Inc. in Dayton, Ohio, in Ray’s honor. To leave a special message for Ray’s family, visit http://www.newcomerdayton.com.