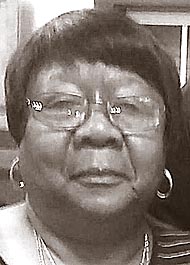 Judy Mae Johnson Mikesell passed away on Monday, March 1, 2021, at her home in Cedarville, Ohio. She was 75.

Judy was born on April 7, 1945, in Uniontown, Ala., the daughter of Charlie and Ella (Johnson) Mitchell. Judy and her family moved to Middletown, Ohio, during her early childhood. She graduated from Middletown High School in 1963 and spent 25 years working for Cincinnati Gas and Electric and served as a steward for her local union. She enjoyed family gatherings, cookouts, live music, dancing and laughter.

Judy was preceded in death by her parents and by her husband, William Charles “Chuck” Mikesell. Judy Mae Johnson Mikesell leaves to cherish her memory four siblings, Rosaline Lindsey, of Middletown, Ohio; Lucy Lang, of Yellow Springs; A.C. Mitchell, of Middletown; and Ivan (Renée) Mitchell, of Columbus, Ohio. She also leaves a host of nephews, nieces and friends who will forever miss her.