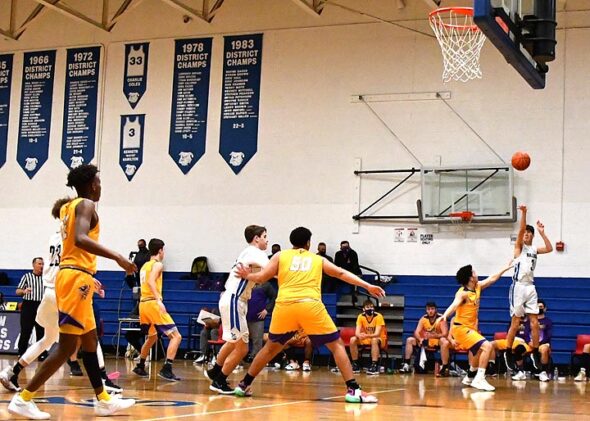 Junior Cameron Harris and senior Haneefah Jones were the winners of the Metro Buckeye Conference Sportsmanship award in action earlier in this basketball season. Pictured here is Harris shooting a three-pointer. (Photo by Michael Knemeyer)

On Wednesday, Feb. 4, the Yellow Springs High School boys varsity basketball team faced the No. 3 ranked Springfield Catholic Central in the first round of the Division IV Southwest District Tournament.

Catholic Central raced out to an early lead of 20–7, according to an account of the game in the Springfield News-Sun. YSHS hung in there though, especially as Eli Eyrich hit a buzzer beater to go into the locker room at halftime down 37–26.

But the Irish effectively shut down the Bulldog’s top scorer, DeAndre Cowen, and extended their lead in the second half. Cowen ended with 16 points, 15 of which came in the first half.

Awards given to boys, girls

YSHS junior forward DeAndre Cowen was awarded First-team All Metro Buckeye conference and honorable mention all Southwest District for his feats this season. Cowen ended the season as the league’s top scorer, averaging 20.9 per game. He also led in blocks (3.6 per game) and was runner up in rebounds (9.2 per game).

Eli Eyrich was selected to the MBC’s second team. Eyrich, a sophomore guard, was second in assists in the league, with 4.2 per game.

For the girls varsity basketball team, guard Angie Smith won a slew of awards. The junior was selected to the MBC’s first team and the District 15 first team, her third straight year receiving both honors. In addition, she was chosen as the District 15 underclassman of the year and earned a place on the second team in the All Southwest District media poll.

Smith led the league in scoring, with 22.9 points per game, and in steals, with four per game. And she came in second in assists (5.1 per game).

Junior Aaliyah Longshaw was selected to the MBC second team for her third year straight. The forward finished third in steals (3.5 per game).

Senior Haneefah Jones came away with the MBC Sportsmanship Award, and fellow senior Annlynn Foster earned a spot on the league leaderboard by finishing second in rebounds for the season. She averaged 10 per game.