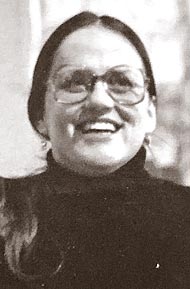 Yvonne Lynn Davenport passed away at her home in Yellow Springs on Feb. 4, 2021. She had been at home surrounded by her friends and family while battling pancreatic cancer since her diagnosis in October of last year.

Yvonne was born April 1, 1948, in Dayton, the youngest of seven children of Earl Davenport Sr. and Georgia (Woodall) Davenport. Yvonne and her elder siblings, Jackie Sue Davenport and Earl Jr., were the only three children to survive to adulthood. At the ages of 4 and 5, Yvonne and Jackie were taken to the OSSO Veteran’s orphanage home in Xenia by their mother, who was single at the time and barely making ends meet. Georgia would pass away from lymphoma at the age of 32, just a few months after leaving the girls at the home.

Yvonne graduated from the OSSO home in 1965 and briefly attended college at Central State before spending a year in Louisville with her brother. She returned to Yellow Springs and was working at the downtown Gabby’s and Antioch Bookplate Company when she had her daughter, Jacqueline Diane, in 1969. Yvonne then began a career at Antioch College in 1970 and would remain there until 2014.

On top of being a bartender at The Winds for a spell, Yvonne was a prized housekeeper to the college and college president as well as a secretary and cafeteria worker over the years. She was an active union member of the UE 767. Beyond those titles, her co-workers and many friends at the college would tell you she was a beloved staple to the community, a special friend to students and faculty alike. While working at Antioch, Yvonne acquired her bachelor’s degree in business management from the college.

Yvonne and her sister moved in with one another to raise Yvonne’s daughter, Jackie Diane, and Jackie Sue’s daughter, Joretta Yvonne. Together, they were active in running local softball leagues. Yvonne played short-stop and stayed busy with tournaments and the self-made family of the softball team, affectionately known as “The Sisters.” Those same sisters were present during her battle with cancer and stood by her until the end.

During retirement, Yvonne spent time fishing for catfish, tending her garden and being a fun, loving grandma. She was extremely creative and dove into art with ferocity, a trait she applied to loving her friends and family as well. Her presence as a strong, brilliant and beautiful person will be missed by all who knew her.

A graveside service will be held on Thursday, April 1, beginning at 2 p.m. at Glen Forest Cemetery.