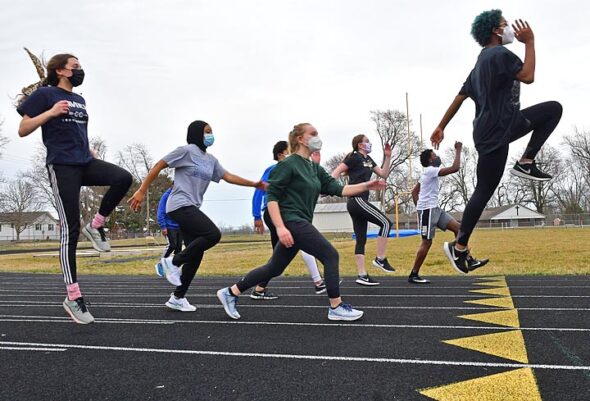 The 2021 version of the Yellow Springs High School baseball team took the field this past Saturday, March 27, for the first time in almost two years. Last year’s slate was wiped clean due to the pandemic. The lack of a 2020 season means this year’s squad has only two players who have played in a high school contest.

“We have an extremely challenging out-of-conference schedule, but these experiences will bode well for us as we continue to develop,” new head coach Mitch Clark said. “It’s a process.”

The young squad got their first taste of high school varsity baseball with the strongest part of their schedule. Right out of the chute, the Bulldogs saw one of the finest Division II schools in the area, the Blanchester Wildcats. OHSAA uses the number of students to determine division, which places Yellow Springs in Division IV.

The experienced and talented Wildcats came out of the gate firing on all cylinders while the Bulldogs played hard, fighting through the nervous energy that comes with a new experience.

Strong pitching debuts by freshman Jake Ortiz-Thornton and sophomore Joshua Clark, supported by the impressive hitting of JP Anderson, was just not enough for Yellow Springs to stay with Blanchester.

Pitching coach Sam Jacobs noted, “The poise demonstrated by Jake and Josh was impressive!  Great things are in their future.”

Despite the long road trip to Blanchester, the team was well supported with parents and friends.  No doubt these are the same ones that supported the fundraiser that garnered funds for the team’s new uniforms.

With only a Sunday between contests, the Bulldogs again went on the road Monday, March 29, to face a strong Division III opponent in the Northeastern Jets.

The home opener for the Bulldogs was scheduled for Tuesday against Metro Buckeye Conference opponent Legacy Christian Academy Knights. The next game, Thursday, April 1, is also against the Knights, but at their home field at the Athletes In Action complex. Games at Southeastern on Friday and a double-header at nearby Cedarville round out the packed first full week of the 2021 campaign.

In addition to coaches Clark and Jacobs, the club is guided by hitting/bench coach Phil Renfro.

It’s been almost two years since the Yellow Springs softball team last played a game thanks to the COVID outbreak last year that forced the cancellation of all softball games. Fortunately for this year’s team, eight of the girls on the squad from 2019 are able to return.

There are six juniors and two seniors returning, joined by three freshmen, a sophomore and a senior.

“This is my 10th year coaching and I’ve never had this much depth of quality starting players,” DeLong said.

A key player for this year’s team will be senior catcher Bre Wallace. Wallace caught almost every inning for the team two years ago and led the team in hitting with a .532 batting average. She is also a  standout on defense as she has a “strong and accurate arm and a good glove,” according to DeLong.

“Wallace is the best catcher I’ve had in my [time] at Yellow Springs,” DeLong said.

The infield is also an experienced group that consists of stalwarts Lily Rainey at shortstop and Ava Schell at first base. DeLong called the two “solid players.”

“Rainey and Schell are both natural athletes who were stand-out players at their respective positions during their freshman year,” DeLong said.

Second and third base will be shared positions this year. Second base will be covered by junior Carina Basora and freshman Violet Babb. DeLong said “both players are outstanding fielders and deserve to start this year.”

“Basora has really improved her quickness and hitting and can fly on the bases and is probably the best natural athlete on the team,” he continued. “Babb has soft hands on defense and drives the ball when she hits.”

Playing third base will be junior Sophia Lawson and freshman Joslyn Herring. As the fastest player on the team, Lawson will be the leadoff hitter. She’s additionally adept at bunting and knows how to run the bases, DeLong observed. Herring, who will also see significant time at third base, boasts a “strong and accurate arm” and is “a natural hitter who drives the ball hard and long when she connects,” according to DeLong.

The outfield will be led by sophomore Halee Sparks and junior Rosemary Burmester. The outfield group also consists of Natalie Galarza, Gabby Florence and Evie Hall.

The pitching this year consists of several inexperienced candidates. Senior Hailey Burk looks to be the  No. 1 pitcher this year. Coach DeLong noted that she has “improved her control and increased her velocity this year.”

Newcomer Sparks is a raw talent who will get plenty of time on the mound. Other pitching candidates are Basora, Lawson and Rainey.

Team Captains this year are Wallace, Burk, Basora and Lawson. Coaches this year with DeLong are Bubba Worsham, Shannon Cox, Elly Kumbusky and Hannah Morrison. Home games will be played at Gaunt Park.

YSHS varsity tennis kicks off this week with two matches. Our young, but very talented team is excited to get the season underway!

The Yellow Springs High School boys and girls track teams are being coached this season by Isabelle Dierauer and John Gudgel with assistants Peter Dierauer, Devon Lewis and Cameron Haught. Both squads are smaller in size than past years but return a bevy of key performers who bring valuable experience. What the Bulldogs lack in numbers they make up in terms of quality.

The girl’s squad returns senior Annlyn Foster, who was a regional finalist from 2019 in the 100 hurdles and 400 relay. Annlyn joins junior Malaya Booth and senior Hannefah Jones, who also participated in the 2019 regionals. Malaya will focus on the 100, 200 and relays while Haneefah will concentrate on the high jump, long jump and 400 relay.

The lady tracksters also return letter winners Devyn Deal, Avery Reeder and Marin Wirrig, who are strong contributors in the short sprints and relays. Senior Natalie Galarza returns after a two-year hiatus and provides needed depth in the distance races.

Newcomers this year are ninth graders Cheyan Sundell-Turner and Josie DeWine who show exceptional promise in the distance races. Cheyan has been a two-year regional qualifier in cross country. Rounding out the girls team is senior Kayla Ross, who is a first-time participant in track but has shown potential in the high jump and long jump.

The boy’s squad is ably led by senior letter winners Liam Hackett, Gideon Naziri, Rilo Oberg and Griffin Roberts. Hackett will run in the sprint races, Roberts will run the long hurdles, while Oberg will run the 3,200 meters for the Bulldogs. Naziri will oversee the middle distance events.

The junior class has Joaquin Espinosa, Maddox Flatt, Yanne Gilley and Malik Thomas. Espinosa will return as a high hurdler while Flatt returns to YSHS on the heels of a successful cross-country season. Gilley is the most versatile athlete on the team with regional potential in the sprints, long jump and pole vault, where he narrowly missed out on qualifying for the regionals two years ago. Thomas has shown flashes of brilliance in the sprints and long jump and will be a valuable contributor.

Sophomore Sven Meister promises to be a solid performer in the discus and shot put while ninth grader Malik Booth has the most range on the team from the long sprints all the way to the mid-distance races.