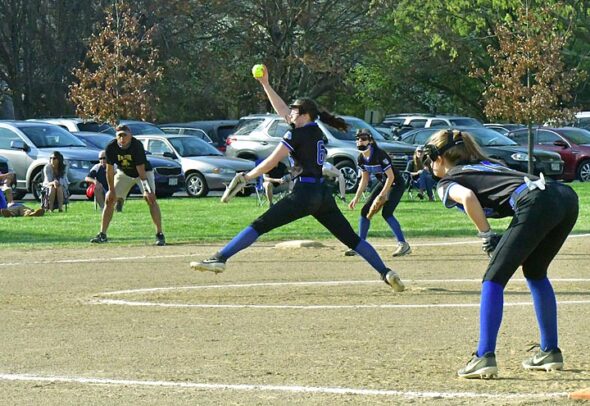 YSHS senior pitcher Hailey Burk persevered on the mound against Dayton Christian on April 6, scattering nine hits and striking out four batters to improve her MBC record to 2–0. The Bulldogs won 35–16. (photo by Kathleen Galarza)

Last week’s baseball schedule started with a Monday evening game, April 5, against the Troy Christian Eagles at home. Isaac Grushon toed the rubber for the second start of his young career and had another solid outing. Sam Miller made the first appearance of his high school career in relief of Grushon with a fine shutout inning. Miller’s stint was capped off with a strikeout to end the inning using a devastating curveball that left the batter wondering what he had just seen and his teammates celebrating in the dugout. Krishan Miller provided the only offense of the game, that was again well-attended by the Bulldog supporters. The lack of offense meant the Eagles came away with the win against the hometown Dogs.

Krishan Miller made his second start of the year and gave up only four hits to powerhouse Dayton Christian on Tuesday, April 6.  The Crusader’s strategy of leaning into pitches kept the coaching staff frustrated and the basepaths full all night. Noah VanHoose came in to relieve Miller and did a wonderful job, throwing only nine pitches in the last inning. Eli Eyrich made yet another diving catch in the expansive Gaunt Park outfield while Blaine Baker almost matched the feat but had the ball exit his glove as he crashed to the ground. Grushon added solid defensive play as the Bulldog outfield had their best game of the year. The strong pitching by the Crusader’s cooled the Bulldog bats for the evening, leading to a loss.

Wednesday’s game saw out-of-conference opponent Catholic Central come to town on another fine night for baseball at Gaunt Park. Sam Miller, coming off his nice relief appearance, made his first high school start and had a good outing. Sophomore Josh Clark came in to finish the job against the Irish and had a superb appearance. A nice scoop at first base by Shawn VanHoose and a great running grab by sophomore JP Anderson in the outfield, kept the scoring down by the Irish. A season high in runs was scored by the Bulldogs as Anderson also had a perfect night at the plate with two hits, a walk, a stolen base, an RBI and a run. Clark, Eyrich, Krishan Miller and Jake Ortiz-Thornton also added hits.  Eyrich and Ortiz-Thornton showed their speed on the basepaths as they each recorded steals, keeping the Bulldogs perfect on the year in that department. Although the Bulldogs again fought hard to the very end, they came up short in their bid to steal a victory from the Irish.

Thursday’s game against Dayton Christian was washed away and rescheduled to Friday. The weather was still not cooperating on Friday as the squad made their way to the Crusader’s home field in Miamisburg. The home team had their field covered in tarps and ready when the rain, thunder and lightning finally subsided. The complex had everything but lights, so the game was shortened due to darkness. Grushon had another solid outing, but had trouble getting the umpire to agree with his strike zone and had caked-on mud in his spikes. Sophomore Shawn VanHoose settled in to his first baseman duties, turning a stellar double play and almost getting another. Hitting coach Phil Renfro’s lineup saw men reach base every inning, but they were unable to plate enough to overcome the Crusaders.

The next round of games includes yet another busy week for the Bulldogs, with away games scheduled this week for Monday, Tuesday and Wednesday against Troy Christian, Emmanuel Christian and Cedarville, respectively.  Thursday’s contest has a 5:30 p.m. start time at Gaunt Park against Metro Buckeye Conference rival Emmanuel Christian. The week is completed by a double-header at Newton on Saturday, starting at 11:00.

After coming from behind to win their opening MBC game last week against Legacy Christian, the Bulldogs softball team was hoping to get off to a better start as they hosted Dayton Christian at Gaunt Park in their second MBC game Tuesday, April 6.

No such luck for the home team, as they gave up seven first-inning runs to Dayton Christian to start the game; but in the end it didn’t matter, as the Bulldogs responded by exploding for 23 runs in their first at bat. They never trailed again as they cruised to a 35–16 victory over the Crusaders to improve to 2–0 in league play.

“We keep getting off to slow starts in the first inning, but then are able to quickly overcome the deficits by out-hitting our opponents,” coach Jim Delong commented.

Each of the first nine Yellow Springs hitters got on base during the team’s first at bat. Carina Basora led the first-inning charge as she had three hits and three runs; and Violet Babb topped off the inning when she drilled an inside-the-park homerun to right center to finish the inning’s scoring. In between, Lily Rainey and Joslyn Herring each got on base three times and scored three runs in the first inning as well.

Senior Hailey Burk persevered on the pitching mound, as she pitched her second complete game of the season by scattering nine hits and striking out four batters to improve her MBC record to 2–0.

“Hailey did what she had to do to win the game,” the coach said. “She’s a competitor on the mound and battled to get the win.”

Hitting stars for the game included catcher Bre Wallace, who was on base five times and had seven RBI’s; third-base player Sophie Lawson, who had three hits, a walk, four runs and four stolen bases; and second-base player Carina Basora, who was five for five with eight RBI’s.

“All her hits were solid line drives,” DeLong said of Basora.

The win gives the Bulldogs sole possession of first place in the MBC, with a 2–0 record. The team is 2–3 overall.

Bulldog tennis is off to a solid start with a 2–1 record, reflecting wins against conference rival Legacy Christian and Waynesville High School.

The talented team consists of mostly sophomores and freshmen, playing in their first year due to a canceled season last year. Seniors Ian Sherk, captain, and Shaylee Smith round out this very skilled team.

While our team may be young and mostly inexperienced, our talent and potential to put YS tennis at the forefront is taking shape.

The girls squad, with only six members competing, finished in third place behind the larger Division 1 schools Tecumseh and Kenton Ridge. The girls team garnered four first-place finishes and two runner-up efforts in this competitive meet. Senior Haneefah Jones leaped to a personal best of 15’5″ to win the long jump, and complemented her award-winning jump with a second place in the high jump. Sophomore Cheyan Sundell-Turner outdistanced the field in winning the 1,600 meters (5:51), and came back one hour later with a silver medal run in the 3,200 meters (12:26), with both efforts being personal bests. Senior Annlyn Foster, after a two-year hiatus from the 100 hurdles, rocketed to a first-place run in a time of 17.63. Junior Malaya Booth ran a great early season time as she outkicked the field in winning the 200 meters (28.59).

Coaches Isabelle Dierauer and John Gudgel were very complimentary of the numerous personal bests and scoring efforts. The Bulldogs will travel to St. Paris on Friday, April 16, to compete in the 15-team Graham Invitational.