The Bulldogs are 4–3 going into the fourth week of match season. Two team wins came against Northeastern and Cedarville. While we faced some difficulty playing Dayton Christian and Urbana, the matches were not without a silver lining. Senior Ian Sherk triumphed over DC conference rival Silas Thompson in a straight set victory, 6–3, 6–1. Senior Shaylee Smith continues to improve in her rookie year as she strives for her first match victory, accumulating five game wins.

Overall our team is staying ahead of the curve in their individual standings on the season: Ian Sherk is 4–3 in the high pressure first singles spot; Henry Smith-Heston is solid at second singles with a 5–2 win record; doubles duos Ethan Knemeyer/Jason Knemeyer remain undefeated at first doubles, at 7–0; and Tallis Onfroy-Curley/Liam McClean have a respectable 4–3 record in the second doubles spot. The mighty Bulldogs will travel to Carroll and Legacy Christian later this week. 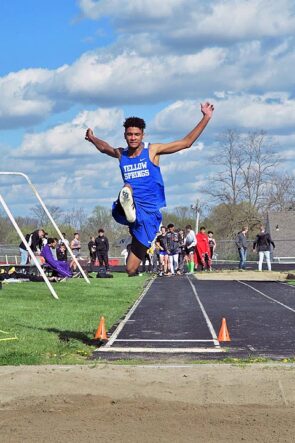 Friday night, April 16, the Bulldog track squads competed at the ultra-competitive 13-team Graham Invitational in St. Paris. Yellow Springs was the only Division 3 team in the entire field of Division 1 and 2 schools. The Bulldogs achieved season best marks in the majority of their respective events.

Senior Haneefah Jones earned two runner-up medals with a season best effort in the high jump (4´10˝) and the long jump. She also was a part of two ribbon-earning relay teams: the 400 relay (eighth), with Annlyn Foster, Avery Reeder and Kayla Ross, and the 1,600 Relay (seventh), with Natalie Galarza, Reeder and Foster.

Distance ace Cheyan Sundell-Turner competed against some of the best distance runners in Ohio and achieved a third place in the 1,600 meters (5:48) and fourth place in the 3,200 meters (12:12), which were season-best efforts. The girls finished in 10th place.

On the boys side, junior Yanne Gilley earned a medal with a third-place leap (18´2˝) in the long jump. The boys 800-meter relay team of Gilley, Liam Hackett, Griffin Roberts and Malik Thomas placed eighth and received a ribbon. Distance runners Malik Booth, Gideon Naziri and Rilo Oberg, along with hurdler Joaquin Espinosa, put forth solid efforts. The boys placed 12th in the 13-team field.

Coaches Isabelle Dierauer and John Gudgel were pleased with the efforts and confidence that the athletes displayed against the stiff competition.

Mother Nature remained undefeated, as last Monday’s contest against the Troy Christian Eagles was postponed due to weather. The game has been rescheduled for 5:30 p.m. on April 28 at the Eldean Road home field in Troy.

Yellow Springs played conference rival Emmanuel Christian on Tuesday, April 13, at their place. The Bulldogs lost 6–0 behind another complete game pitching performance by sophomore Krishan Miller.  Miller scattered five hits over his six innings and recorded seven strikeouts. Although Eli Eyrich smacked a double and Jake Ortiz-Thornton knocked two hits, it was not enough to plate any runs.

Wednesday’s game was close to home as the Bulldogs traveled to nearby Cedarville. Isaac Grushon started and had a fine performance, giving up only five hits and earning five strikeouts over his four innings. Noah VanHoose came in to relieve Grushon and gave up only one hit and no runs, to go with his two strikeouts over the final two innings. A recent practice that focused on steals paid off as Josh Clark, Eyrich, Miller, Ortiz-Thornton and Sam Miller all swiped at least one bag. Strong hitting by Ortiz-Thornton and Clark plated runs by Eyrich, Grushon and Ortiz-Thornton. One of the most satisfying plays of the year was when freshman Sam Miller laid down a perfect bunt to advance two runners, who later scored. Hitting coach Phil Renfro commented, “It’s really great to see execution in games for things we work so hard on in practice.” The game ended in a 7–3 loss to the Indians.

Thursday’s game was a rematch with Emmanuel Christian. The Lions came to Gaunt Park expecting to earn another shutout, but the Bulldogs had other ideas. Sophomore Josh Clark twirled a seven-inning complete game, giving up five earned runs while punching out eight hitters. The home team came up a little short despite great defense at third base by junior Noah VanHoose and strong hitting by the Bulldogs. Clark had two hits; Eyrich added one; JP Anderson had two stolen bases and two runs; and VanHoose added a hit, walk and run scored to his resume. However, the offensive night by Krishan Miller was the most impressive as he had two singles, a double, a walk and three RBIs. All of that plated only four runs, as too many men were left stranded in scoring position. The final score was 13–4 in favor of the Lions.

Saturday’s matchup was with another powerhouse as the Bulldogs traveled to Pleasant Hill to face the Newton Indians in a day-long doubleheader. The host team boasted a new turf field and a complex that would rival many small colleges. The environment proved too tough to overcome as the Indians gave a rude welcome to sophomore Eli Eyrich in his first high school pitching start. Eyrich gave up five hits and collected two strikeouts over his two-inning debut. Sam Miller came in to relieve Eyrich and gave up six hits and earned five strikeouts over his two innings. Two amazing diving catches by shortstop Isaac Grushon kept the scoring down, coupled with stellar defense by Shawn “Scoops” VanHoose at first base. Sophomore Lucas Tumblison earned a walk, scored a run and played solid defense as he made the first start of his young high school career. Final tally: 24–1.

Intermission included a fantastic spread, provided by Jim Wanke and Ginger Tumblison. Some of the players also used this time to peruse the ultra-modern fitness facility just behind the baseball field.

Whether it was the nourishment or the increasing temperature, no one is sure, but the second game saw the Bulldog bats warm up significantly. Eyrich had two walks, a stolen base and a run from his leadoff position. Krishan Miller followed in the two-hole with a double, two walks, a hit by pitch, a stolen base and two runs. Grushon added a hit, walk, stolen base and a run, while Ortiz-Thornton had a hit, two stolen bases and two RBIs. Josh Clark earned a walk and a stolen base, followed by Anderson’s two stolen bases and a run. Sam Miller also added a walk and a run as Shawn VanHoose walked and added an RBI. Lucas Tumblison again had a walk and strong defense in his second start of the year.  Jake Ortiz-Thornton pitched a complete game with six strikeouts, but all of that was not enough for the Bulldogs to overcome the Indians as they finally succumbed 16–6.

After dropping games on the road to Waynesville and Bethel, the Yellow Springs Bulldogs hosted Oakwood, Thursday, April 15, on a cold and windy night; and while the Bulldogs were only outscored 4–3 after the first inning, they lost by a final score of 14–3. The wind and cold played a big factor in the game.

“After the first inning, our team did a good job on defense and out-hit Oakwood the rest of the way,” coach Jim DeLong commented.

“Babb was throwing strikes and this was her longest outing of her career. She’s starting to become an effective pitcher,” DeLong said.

Babb also delivered at the plate, as she had two hits and scored a run after stealing two bases.

“Babb’s only a freshman, but she’s shown she can excel at all positions on offense and defense,” the coach added.

Sophomore Sophie Lawson showed off her speed on the bases to spark a two-run rally in the fifth inning as she beat out a slow roller to third base and easily scored from second base on a single by Joslyn Herring.

“Lawson is the ideal leadoff hitter,” DeLong said. “She continues to manufacture runs for us with her aggressive base running.”

Senior catcher Bre Wallace drove in the other run in the inning with a single to the outfield.

“Wallace is swinging the bat well,” the coach observed. “She is our best hitter and had two nice hits tonight and was robbed of a third hit.”

On the defensive side, Lawson at third base had an active day as she chased down two pop-ups and then learned firsthand why they call third base the “hot corner” when she grabbed a scorching line drive to end an inning and get the Bulldogs out of a jam.