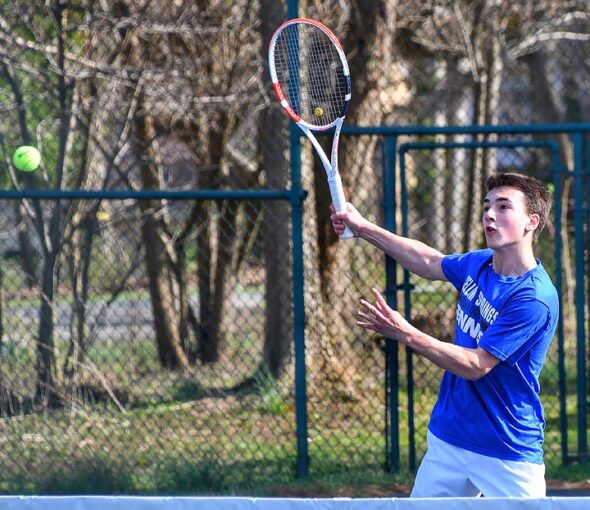 Going back to the days of the now defunct Greene County League, the YSHS track teams competed at the fifth annual Greene County Invitational Track meet on Thursday, April 22, at Bellbrook High School. The six-member girls squad placed fourth out of the eight competing Greene County high schools. Beavercreek, with a squad of 100-plus athletes, won both the boys and girls competition. The YSHS boys squad, with eight competing members, finished in eighth place.

On the girls side, senior Haneefah Jones garnered two second places with a season best in the high jump (5’) and a leap of 15’4 ¼” in the long jump. Jones also teamed up with Malaya Booth, Annlyn Foster and Avery Reeder for a fourth-place finish in the 400 relay (55.0). Fellow senior Foster ran to a second place effort in the 100 hurdles (18.32) while sophomore Cheyan Sundell-Turner pulled off a tough distance double with a runner-up place in the 3,200 (12:26) and a gutsy sixth place in the 1,600 (5:53). Foster had a season best performance in the shot put (29’1 ¼”). Other scoring efforts were achieved by Booth in the 200 (fourth) and 100 (fifth), while Reeder hurdled to a fourth place in the 300 hurdles. Marin Wirrig came back from an injury to run solid races in the 100 and 200 meters.

On the boys side two relay squads had eye-opening scoring efforts: in the 400 meter relay the team of Malik Thomas, Liam Hackett, Griffin Roberts and Yanne Gilley passed the baton to fourth place (50.61) while the 800 meter relay team of Thomas, Hackett, Joaquin Espinosa and Gilley ended up in fifth place (1:43.42). Espinosa, sixth in the 110 hurdles; Roberts, seventh in the 300 hurdles; and Gilley, eighth in the long jump, all contributed to the scoring total. Malik Booth and Gideon Naziri ran great races in the 800 and 1,600 meters and Rilo Oberg performed admirably in the 3,200. Sophomore Sven Meister pulled off a double effort with great tosses in the discus and shot put.

Coaches Isabelle Dierauer and John Gudgel were once again impressed with the competitive nature of both squads in the cold and windy conditions.The Bulldogs will host the annual Bulldog Invitational at Greeneview High School on Friday, May 7, due to the ongoing construction of the new track at YSHS.

The Division I Trotwood-Madison Rams came to Gaunt Park on Tuesday, April 20, and were met with an unexpected challenge in the form of Yellow Springs High School sophomore pitcher Krishan Miller.

Miller met with his coaches before the contest and was given one simple instruction: “Throw strikes!”

Well, he did just that to every batter he faced. Miller pitched a complete game shutout. He walked zero batters and had seven strikeouts on the way to the first win of his young high school career. In fact, he gave up only two hits, but he was not about to let that spoil his outing. He picked off one runner, and the other was thrown out by senior Blaine Baker as the runner tried to steal. The consistent pitching by Miller and the perfect defense by his teammates kept the Rams from reaching even second base. The opponent’s coach was surprised and impressed with Miller’s performance as his batters strode to the batter’s box and back to the bench, one after another.

The brisk night did not keep the loyal Bulldog fans away, nor could it cool the hometown bats. A five-run first inning allowed Yellow Springs to cruise to a 10–0 win on the run rule in five innings. Eli Eyrich had a hit, three stolen bases and two runs from the leadoff spot, followed by Josh Clark who added a hit, walk, RBI and two runs. The middle of the lineup saw Isaac Grushon and Jake Ortiz-Thornton add two hits each, with Grushon driving in three RBIs. Miller added to his stellar pitching performance by knocking a hit, scoring a run and adding an RBI. Baker had two hits, three RBIs and a stolen base to go along with his strong night at catcher. JP Anderson contributed a walk, run, stolen base and an RBI, and Sam Miller also added a run to the tally.

Head coach Mitch Clark commented, “It was nice for the boys to see a positive result from all of their hard work. I see their development every day, but they really needed to see a win on the scoreboard.”

Tuesday’s game, a rematch with the Cedarville Indians, was canceled due to weather. The additional day of practice did not have the desired effect as the Bulldogs came out uninspired against Tri-County North on Friday.  The long bus ride seemed to sap the energy that was amassed in the Trotwood game.  The Panthers put the ball in play against Josh Clark, but the Bulldogs defense had a rough night in the field. Sam Miller came in to pitch the final inning and shut the door hard with three strikeouts. The offense was led by Krishan Miller as he had two walks, two runs and three stolen bases. The Bulldogs lost to the Panthers in a final score of 18–3.

This week’s slate included a home game on Monday, April 26 against Tri-Village and an away game at Troy Christian on Wednesday. Friday there will be an away game  Madison.

In softball a double play by the defense is oftentimes a pitcher’s best friend. Yellow Springs High School sophomore pitcher Halee Sparks made several friends last week in her start as a pitcher, as the Bulldog defense turned three double plays to help them win. But the play of the day came when Sparks preserved the victory by making a shoestring catch of a popup to end the game. It was Sparks first career victory, and it was a memorable one, as her game-ending catch stranded three Trotwood runners on base, allowing the Bulldogs to hold on for an exciting 10–9 victory.

Coach DeLong commented: “Sparks is becoming a complete pitcher on the mound, and being an outstanding fielder is a bonus and was needed this game. She’s a fierce competitor out there. I was going to take her out of the game before that last batter, and she told me she could get that last out, so I left her in the game, and she was able to get the job done to win the game.”

The Bulldogs were leading 3–1 early when the defense took over as second-base player Carina Basora picked off two-line drives and doubled the Trotwood runner off second base both times, ending Trotwood rallies in separate innings.

“The double plays this game were huge,” DeLong said. “Basora has a lot of reach and quickness and she used both attributes to make those plays.”

Basora’s second double play seemed to spark the team as they sent 13 players to the plate in the bottom of the inning to take what looked like an insurmountable 10–1 lead. In the inning, Bre Wallace had a hit and drove in three runs, and Violet Babb singled and scored a run; but the key hit of the inning was a two-out, bases-loaded double to left field by Hailey Burk that scored three runs and gave the team the 10–1 advantage.

“Burk really hit the ball — it was a laser to the outfield and it turned out that we needed every one of those runs,” the coach said.

The Bulldogs were still leading 10–1 in the last inning when Sparks helped herself on the mound by grabbing a line shot back to her and then doubling the runner off third base for the double play.

“Thank goodness Sparks is quick and can field the middle,” DeLong said. “That ball came back at her quick, and she somehow was able to grab it for the critical double play.”

Sparks play turned out to be a game changer as a cold front found Gaunt Park, and a light rain with wind and cold made it difficult to catch and throw the ball. Trotwood took advantage of some mistakes on defense to pull within 10–9 when Sparks saved the day with her catch for the final out.

“We didn’t play well that last inning, but we got the out when we needed it, so I was proud of our team,” DeLong said.

This past week the Bulldogs clinched at least a tie for first place in the Metro Buckeye Conference, MBC, with two conference games remaining. The Bulldogs have to beat either Legacy Christian or Dayton Christian to finish in first.

“We have a limited number of teams in the league this year, but we beat our rival Dayton Christian for the first time since 2017 to get into this position,” the coach said. “This team is the most talented team I’ve coached since the 2017 team that went undefeated in the MBC. We’ve scored a lot of runs and we are solid on defense.”

Bulldog tennis is cruising with three more team wins — against Legacy Christian, Cedarville and Fairborn — bringing the squad to 6–3 on the season. The players are finding their stride, growing with each match they play. While they face tough opponents ahead, the mighty Bulldogs are learning how to win the hard matches that inexperienced players typically don’t win.

The team’s most notable win came against Fairborn, with second singles player Henry Smith-Heston clinching the team win, 6–2, 7–6. The two doubles courts won their matches easily, putting all the pressure on Smith-Heston to seal the victory. Smith-Heston played a courageous match that undoubtedly left his opponent stunned.

Speaking of courageous athletes, our boys tennis team has a collective of what I like to call our very own “Strong Girls Club.” Composed of five freshmen, one senior, and two eighth graders shadowing in preparation for next year, most of our Lady Bulldogs had never picked up a racquet before the season. Now they are competing, and showing so much improvement since the season began. Often I hear them laughing, cheering each other on, learning the love of the game. As a coach, I couldn’t be more inspired by this group of capable, brave, and hard working young women. I’m proud of how far they’ve come in such a short time.