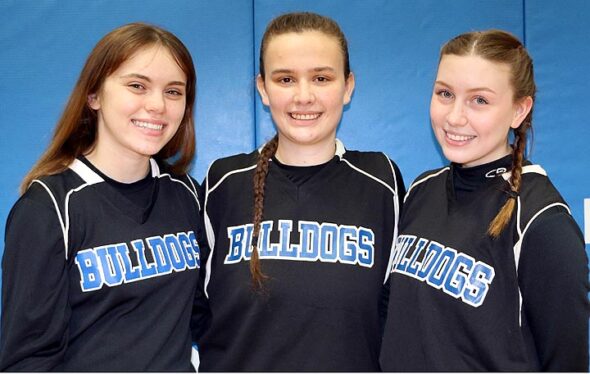 Strong start for track and field

After a nearly two-year absence from competition due to the cancellation of the track season last year because of COVID-19, the boys and girls teams acquitted themselves in fine fashion during a six team meet at Shawnee High School, Wednesday, March 31.

The girl’s squad, with only eight members competing, finished in third place, besting Greeneview, London and Shawnee and only being outpaced by Carroll and Mechanicsburg.

Senior Haneefah Jones leaped her way to a pair of first-place finishes in the high jump (4´8˝) and the long jump (15´2˝), a personal best.  She also earned a second-place finish as part of the 400-meter relay team with Malaya Booth, Avery Reeder and Kayla Ross.

On the boy’s side, the Bulldogs only had five competitors, but put forth a solid effort with great early season marks and times.

Senior Griffin Roberts ran to a personal best in the 400 meters and was complemented by fellow senior Liam Hackett, who participated in the 100 and 200 meters with third-place finishes in both of his heats. Newcomer Malik Thomas, in his first ever competition, competed in the 100, 200 and long jump and showed outstanding potential. Sophomores Malik Booth (1,600 and 800 meters) and Sven Meister (discus and shot put) displayed confidence along with good efforts in their first ever high school track meet.

The next competition for the Bulldogs will be at the Seitz Invitational at Shawnee High School on Thursday, April 8.

The Yellow Springs Bulldog softball team generated a little extra excitement in their home opener Tuesday, March 30, against league opponent Legacy Christian as they jumped out to an early 6–0 lead, but quickly found themselves trailing only to garner a come- from-behind victory. Instrumental to the win were key defensive plays by shortstop Lily Rainey and two bunt hits by speedster Sophie Lawson, along with the pitching of Hailey Burk, to outlast their opponent by a score of 15–14.

Coach Jim DeLong stated, “It was a see- saw battle, but in the end two outstanding defensive plays by Rainey at the end of the game and clutch pitching by Burk enabled us to hold them off.”

The Bulldogs utilized their team speed on the bases to score, as Lawson, Carina Basora and Halee Sparks each had four stolen bases.

“Our greatest asset this year is our team speed, so we’re going to use it to manufacture runs,” Coach Jim said.

Third-base player Lawson showed off her speed on the bases by laying down two perfect bunts for hits that drove in three runs, and Basora contributed two hits while scoring three runs.

Coach Jim commented, “We’ve been working with Lawson on her bunting to utilize her blazing speed, and she put down two perfect bunts where the other team didn’t have a chance to throw her out.”

Key to the win was starting pitcher Burk — who was making her first career start — and who, after giving up eight runs in the second inning, didn’t give up another hit.

“Burk is a good pitcher, she was just nervous and had trouble finding the strike zone in the second inning,” the coach said. Burk pitched a complete game, striking out nine and giving up only two hits.

“When Burk started throwing strikes, they had trouble hitting her,” coach Jim said.

In the last inning, when the Bulldogs were protecting a one-run lead, Burk got the last out via a strikeout to end the game, leaving the tying and go-ahead runs stranded on base.

Yellow Springs traveled to Northeastern to face a strong non-conference opponent on Monday, March 29. The Northeastern Jets used their home-field advantage to overtake the Bulldogs despite a complete game by Isaac Grushon, who pitched in his first high school contest. Ben Espinosa made a nice grab in the outfield, and Joshua Clark made several solid plays at third base to support Grushon.

Tuesday, March 30, brought our Bulldogs home. Gaunt Park was filled with fans and excitement as the hometown nine took the field for their home opener against Metro Buckeye Conference opponent Legacy Christian Knights.

Krishan Miller took the mound for his first start of the young season and delivered a complete game. Excellent defense behind Miller allowed him to keep the Bulldogs in the game. Grushon provided a hit, and Eli Eyrich laid down a perfect bunt to get their team on the board.

Pitching coach Sam Jacobs said, “It was great to be home and playing in front of our fantastic fans. Unfortunately, the team was unable to deliver a win, but those will come as they continue to develop.”

Thursday’s rematch against Legacy Christian was postponed due to nasty weather.

Friday, April 2, brought yet another strong non-conference opponent to the table as the squad faced the Southeastern Trojans. Jake Ortiz-Thornton took the ball for his second start of the season,  recording his second complete game of the year.

The Bulldog defense behind Ortiz-Thornton was strong with nice plays by Clark, Grushon, Sam Miller, JP Anderson and Krishan Miller. Great catching by Blaine Baker kept the opposing runners in position on the basepaths. Solid hitting by Grushon, Baker, Clark and Ortiz-Thornton was encouraging, but not enough to overcome the barrage of “hit ’em where they ain’t” singles.

Saturday’s double-header against Cedarville was bumped by the rescheduled Legacy Christian contest from Thursday. The schools are working to reschedule the double-header for later in the year. Meanwhile, the Bulldogs traveled to the nearby Athletes in Action complex, where the Legacy Christian Knights play their home games. Clark made his second start of the year and matched his complete game performance of his first outing. Clark gave up only four earned runs, but the defense let him down too many times to keep the Knights from bettering the Bulldogs on the scoreboard. Grushon continued his solid hitting and is quickly becoming a force in the Bulldogs lineup. Eyrich had his breakout game of the season with an impressive triple, coupled with a highlight-reel diving catch on the outfield turf. The small but mighty group of supporters “were given something to enjoy and talk about over the dinner table on that one!” remarked hitting coach Phil Renfro.