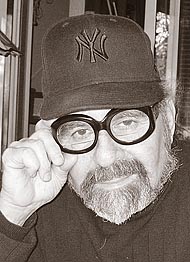 Arnold Adoff, age 85, died peacefully at home after a brief illness, with his loving family by his side as he left this world and moved on to the next.

Arnold was born in the South Bronx in New York City on a hot summer day, July 16, 1935, to Jewish Russian/Polish immigrants, bookkeeper Rebecca and pharmacist Jacob Adoff. Education was incredibly important to Arnold’s parents. Arnold applied and was accepted to the prestigious Stuyvesant High School in New York City, where he excelled and succeeded so much so that he was entrusted with the school’s keys. This was the first time that this honor was given to any student and Arnold was often found studying in the building before sunrise. After Arnold graduated, he followed in his father’s footsteps and attended Columbia University’s Pharmacy College. It soon became clear that becoming a pharmacist was not the path Arnold should take. He transferred to New York’s City College and graduated with a bachelor of science in history and literature. He went on to pursue a master’s degree in history at Columbia University.

Arnold realized at the tender age of 11 that girls liked boys who wrote poems. He also discovered that he had a talent for it. This would serve him well when, at a party in New York City in 1958, he met the love of his life and future wife, Virginia Hamilton.  Arnold and Virginia would marry in 1960 and go on to have two children — a daughter, Leigh, and a son, Jaime. They were happily married and devoted to each other until Virginia’s untimely death at the age of 67 in 2002.

Arnold would become one of the most internationally recognized poets of children’s literature and anthologists of poetry, specifically poetry written by people of color (POC). Long before anyone heard the terms POC or multiculturalism in children’s and adult literature, Arnold was anthologizing poetry of Native Americans, African Americans and Latino and Asian Americans.

Arnold wrote over 30 books in his career, the most groundbreaking being “Black is Brown is Tan.” This was the first book written and published with an interracial family as the protagonists. He won countless awards, including the Children’s Book of the Year citation for “I Am the Darker Brother”; the American Library Association’s best book for young adult citation award for “Slow Dance Heartbreak Blues”; and best children’s book award, School Library Journal for both “It is the Poem Singing into your Eyes” and “Black is Brown is Tan.” In 1988, Arnold won the prestigious National Council of Teachers of English award for Excellence in Poetry for Children.

Arnold worked closely with his wife, Virginia, on every manuscript she wrote. He negotiated all her contracts and was an integral part of her success. They wrote over 70 books in their careers and helped to change the face of children’s literature. For this, Arnold was incredibly proud.

Arnold was always an active advocate for social justice and was a force and presence on social media — especially available for heated discourse with anyone who would like to participate. If you chose to do so, you would find out very quickly you had met your match. There really wasn’t much that Arnold couldn’t talk deeply about. Always a student of history, he could discuss basically any subject with a thoroughness that was very rarely rivaled. He loved being a mentor to aspiring writers as well, happily sharing his decades worth of knowledge, advice and wisdom with the next generation.

Arnold was a lover of all types of music and literature, but was a true jazz buff at heart. That doesn’t really describe his knowledge and experience in American jazz, having seen almost every great jazz performer America has produced. He loved to talk about the times in the Village in the ’50s where one could see Sarah Vaughan, Ella Fitzgerald, of course the great Charles Mingus — whom he managed for a short time — and John Coltrane, just to name a few. He knew them all well and could describe in great detail what it was like hearing them all perform live.

Arnold was a devoted and doting father and grandfather, having gone to every soccer and little league game, track meet, rock and roll show, opera performance and anything else involving his children or that his grandchild, Anaya, might be participating in. He supported them unfailingly in everything that they chose to do. He used to tease that Virginia kidnapped him to the cornfields, but truth be told, he loved his adopted hometown of Yellow Springs. He enjoyed growing tomatoes in his huge garden and then in later years, when he was a bit less mobile, would grow them in large pots on the driveway of the beloved home in Yellow Springs.

Arnold is survived by his two children, Jaime (Cheryl), of Yellow Springs, and Leigh (Jörg), of Berlin, Germany; granddaughter Anaya, of Kettering; brother Steve (Luigina), of Missoula; and countless nieces and nephews, as well as loving friends on both sides of the pond.

Arnold touched so many lives for decades and his bright, shining light will be sorely missed by all.

There will be a gathering of friends and family on Friday, May 14, from 6 to 8 p.m. as well as a celebration of life service on Saturday, May 15, at 11 a.m. Both will take place at the Jackson Lytle and Lewis funeral home on Xenia Avenue in Yellow Springs. Saturday’s service will be livestreamed on the funeral home’s website.

In lieu of flowers, donations can be made to Ohio’s Hospice of Dayton.