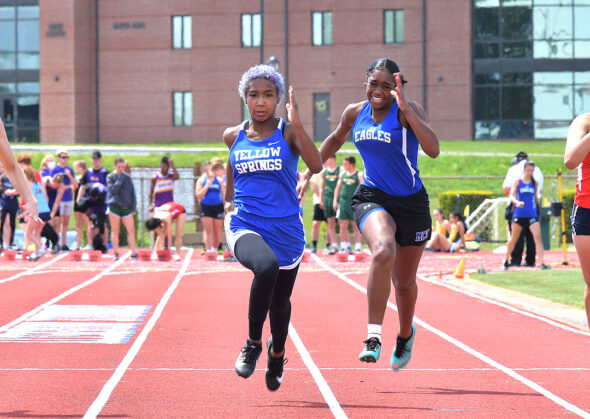 YSHS junior runner Malaya Booth’s poise and speed were on display at the Metro Buckeye Conference championships on Saturday, May 15. Booth finished as the runner up in the 100- and 200-meter sprints. (Photo by Kathleen Galarza)

The YSHS tracksters competed last Saturday at the annual Metro Buckeye Conference track and field championship held at Cedarville University. Competing in near perfect weather for the first time all season, the girls squad ended up in third place while the boys team took seventh place.

On the boys side, Yanne Gilley leaped to a runner-up finish in the long jump (18´10˝) and was complemented by junior Malik Thomas, who earned a fifth place in the long jump (18´1˝). Seniors Liam Hackett and Griffin Roberts joined Gilley and Thomas with a fourth place in the 800 relay. Sophomore Sven Meister heaved the shot put to a fifth place (31´3½˝). Malik Booth and Gideon Naziri ran gutsy races in the 800 and 1,600 meters.

The Bulldogs once again set personal bests in the majority of their events and coaches Isabelle Dierauer and John Gudgel remarked that the competitive nature of each athlete was on full display during the season-defining meet. This Saturday, May 22, the Bulldogs will compete in the district meet finals at Northmont High School with the top-four finishers moving on to the regional meet next week at Troy Memorial Stadium.

The mighty Bulldog tennis team finished regular season play with a 9–5 record. This, by far, has been the team’s winningest season in at least a decade. The talent, spread among the three singles courts and two doubles courts, stepped up each week, contributing to an accumulation of team wins like we haven’t seen in a long time. In years past, we’ve had success on a few courts per team match. But this year, we achieved team victory status, time and time again. I couldn’t be more proud of our players’ effort, courage, improvement and commitment to leaving it all on the court.

The sectionals tournament in Troy on Tuesday, May 11, was a culmination of memorable matches, including hard-fought wins by Ian Sherk, Henry Smith-Heston and the doubles team of Ethan and Jason Knemeyer. Also participating in this highly competitive event were Shaylee Smith in singles and Tallis Onfroy-Curley and Liam McClean in doubles. Sherk won his first match advancing to round two, but sadly lost to the eventual No. 1 seed going into districts. Smith-Heston cruised through his first two matches, winning handily, but was eliminated in the third round, a hard fought, three-set nail biter of a match that fell to Urbana’s senior singles veteran. I have a hard time calling it a loss, because Smith-Heston showed so much growth in his final round. He played with heart, composure and grace. I am certain he will make districts next year.

Ultimately, all eyes were on the Knemeyer duo, entering sectionals with the No. 1 seed in doubles play. The twins were clutch under pressure, soundly taking care of business against Urbana and Carroll, to advance to districts this week. The seeding match wins on Saturday, May 15, against Milton Union and Northwestern solidified their top status. The Knemeyers are the No. 1 seed for Division II doubles going into the district tournament Thursday, May 20, at the Lindner Family Tennis Center in Mason. They face Seven Hills in the tournament’s first round. Anyone interested in attending may contact coach Stacey Knemeyer for ticket information.

The makeup game for the May 4 rainout with Middletown Christian was played last week, with the Eagles coming to Gaunt Park on Thursday, May 13.

Krishan Miller took the mound for his seventh start of the year. He and the Bulldogs kept the game tight in the first half, as the score was 4–3 after four innings. However, the Eagles took advantage of some miscues in the field, timely hitting and some strong base running to outlast the Bulldogs and finish the game 17–3.

Leadoff man Eli Eyrich had two walks, swiped three stolen bases and added a run. Isaac Grushon contributed a hit and a run. Miller provided two hits, a walk and a run from his cleanup position in the lineup. Jake Ortiz-Thornton played team ball by plating a run with a sacrifice fly. Shawn VanHoose had a solid hit that opened the door for pinch runner Lucas Tumblison to add to his stolen base total. On the mound, Miller scattered six earned runs while giving up only two walks and striking out three. Noah VanHoose came in to relieve Miller and gave up a hit.

Senior Blaine Baker took the Gaunt Park field for the last time in his high school career. Baker added an RBI of his own, but it was his stellar work behind the plate that caught the attention of head coach Mitch Clark.

“This was Blaine’s last home game of his career, and he played inspired,” Clark said. “He looked fabulous, blocking pitches and throwing lasers to the bases, to keep the opposing runners in check. His quiet leadership will be sorely missed.”

This game brought the regular season to a close, as the rained out May 5 game against Trotwood-Madison will not be rescheduled.

The Bulldogs were scheduled to travel to Cedarville on Monday, May 17, as part of 2021 sectionals play, but the contest was postponed to the following day because of inclement weather. According to results posted on the Ohio High School Athletic Association’s website, Cedarville won 19–0.

The Yellow Springs Bulldog softball team traveled over 60 miles to take on Botkins High School in a postseason tournament game last week and quickly showed the school up north that they were a team with which to be reckoned. Relying on the base-running speed of Sophie Lawson, the clutch hitting of Bre Wallace, the stellar defense of shortstop Lily Rainey and strong pitching by Hailey Burk, the Bulldogs jumped out to a 5–0 lead after three at bats. But they couldn’t hold on, as Botkins stormed back with 10 runs in the last two innings to win with a final score of 20–10.

“Our team came out ready to play today,” coach Jim DeLong said after the game. “I was really proud of how they grabbed the early lead. We played our best ball of the season those first three innings,” he added.

Junior speedster Lawson set the tone by leading off the game with a walk and stealing second base before coming home to score on a two-out hit by catcher Wallace.

“Lawson once again stole a run for us with her speed on the bases, and Wallace has been our leading RBI hitter all season,” the coach said.

Meanwhile, senior pitcher Burk held Botkins scoreless in the first two innings as she gave up just one hit and struck out two batters and was the beneficiary of a nice play by first base player Ava Schell and second base player Carina Basora. Schell deflected a hot shot ground ball toward second, where Basora alertly picked it up and fired to first base for the out.

“That was a great play by Schell to get her glove on the ball, and a heads up play by Basora to grab it and come up throwing quickly to get the out,” DeLong said.

Botkins then took leads of 9–5 and 10–7, but the Bulldogs offense wasn’t done yet, as they rallied back to tie the score at 10–10 in the fifth inning.

Three of those runs came in the third inning when Joslyn Herring, Wallace and Violet Babb all led off with singles; Halee Sparks crashed a double down the left field line to drive in two runs; and Natalie Galarza got an infield hit to drive in Babb.

“Sparks has really hit the ball hard for me this year and this team showed a lot of character and resilience by coming back to tie the score,” the coach said.

Unfortunately for the Bulldogs, walks were their undoing.

“The late inning walks were a tough way to lose the game, but the effort was always there with this team,” DeLong said.

Senior catcher Wallace, who has been nominated for the Southwest District Coaches Senior All Star game on June 10, finished her career in style as she banged out four hits, scored four runs, drove in two more runs, threw two runners out trying to steal second base and grabbed a bunt in front of home plate to get a force out at home.

“Bre Wallace did it all today,” DeLong said. “She played a complete game. Her offense, running, and defense were flawless. Words cannot describe how much her presence has meant to this team. She will be missed. I am pleased that she was able to finish her career on such a high note.”