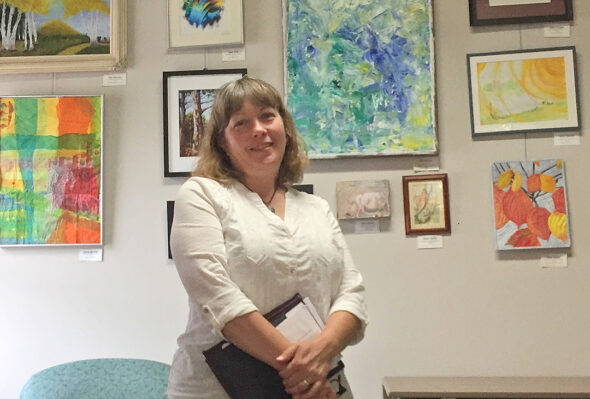 Village resident Caroline Mullin started in her role as the executive director for the Yellow Springs Senior Center in June, succeeding Karen Wolford, who recently retired. She is pictured in the center’s lobby flanked by an art exhibit. (Photo by Orion Wright)

In a time of change for the village, country and world, the leadership of the village’s hub for seniors is undergoing its own transition. Local resident Caroline Mullin recently was named the executive director of the Yellow Springs Senior Center, or YSSC, and she brings with her a vision for the center as a place for resources and meaningful engagement for people of all ages.

Mullin took the helm of the Senior Center in June after the retirement of Karen Wolford, who led the organization for eight years. Mullin steps into the role with 14 years of experience working with seniors, 20 years of history in nonprofit organizations and a powerful desire to serve her community.

In her cozy, new office, sitting in front of a rainy window, Mullin recently spoke with the News, sharing her background and her goals for the future.

Early in her career, Mullin said, she had not considered working with seniors — her bachelor’s degree is in elementary education. After she started working at the Senior Center as a part-time employee in 2007, she realized that working with seniors was something she wanted to do, despite the perceived difference between this work and her educational background.

“You know, [working with kids versus seniors] is not that different,” Mullin said. “It’s all about people skills, good communication, paying attention to what’s needed, being really responsive to the community as a whole, and a lot of patience.”

“Maybe that’s the biggest difference,” she said. “Children are empty buckets waiting to be filled, and seniors have an incredible bucketful of stories to tell.”

When she was a YSSC employee from 2007 to 2012, Mullin realized she had a passion for working with seniors and went on to get her social work license. Mullin first applied to the directorship in 2009, but David Scott instead secured the position.

“I have always wanted this job,” she said. “[In 2009], I just wasn’t prepared enough. I didn’t have the education or job skills yet. When I knew this was a position available, I leaped on it.”

Then, in 2012, Mullin went on to work for the Greene County Council on Aging, an important affiliate of the local senior center. That nonprofit facilitates and provides funding for senior centers across the county.

Mullin also has a master’s degree in public administration from Wright State University and a nonprofit professional certification. She is currently board president of the Yellow Springs Children’s Center.

According to Mullin, the offerings of the YSSC are broader and more varied than community members realize, and engaging with more of the village is a priority. Mullin seeks to expand the center, not only in terms of membership and resources, but also in terms of the scope of the organization as a whole.

“A lot of people think the Senior Center is only for people who are feeble or in need,” Mullin said.

“It’s much more about how that person can find not just their purpose, but something that’s meaningful to them. My leadership style is drawing people in and making people feel included.”

Mullin envisions the Yellow Springs Senior Center not as a “center,” which places focus on the physical location, but rather as a hub — “a broader community link for more people.”

“The Senior Center is where things get started, and then they go,” she said. “There are going to be activities that don’t all happen in this building. This is going to be a resource place — not just an entertainment center.”

Mullin herself sometimes participates in the center’s activities, such as yoga, on her lunch breaks, and encourages others to do the same.

“They don’t have to be a retiree to participate!” she said.

The Yellow Springs Senior Center has functioned in a limited capacity over the course of the pandemic out of concern for the health and safety of its membership. The center was scheduled to reopen for limited in-person programming in October after the Ohio Department of Health and Gov. Mike DeWine lifted restrictions on senior centers and adult day services. That plan was halted after Greene County was elevated to level 3, or “red,” indicating “very high exposure or spread,” by the Ohio Public Health Advisory System. Only now is the center beginning to host in-person events again, with July 1 being the first official day of reopening.

Mullin points out the positive aspects of the changes brought on by the pandemic. Online activities facilitated the engagement of new groups, such as home-bound people. A new synthesis between in-person and online activities will allow this inclusivity to continue, she believes.

Although the budget has been a concern in the past, Mullin describes the Senior Center’s finances as “surprisingly steady.” Over the past year, members were given a reprieve from paying their dues as the center was not fully operational. Despite this, a number of generous donors stepped up to help out. In addition, fundraising events were conducted successfully online. Nevertheless, there are still problems that will require some extra money to solve — maintenance and repairs that call for professional contractors rather than volunteers.

Mullin is focused on the future of the Yellow Springs Senior Center as much as its present. Today, changes are occurring more rapidly than ever before, and the center must be agile and prepared to adapt to any number of possibilities, including another pandemic, she said.

There are other, lighter eventualities to consider as well.

“The seniors of 2030 might have self-driving cars and not need a transportation program,” she said. “In 10 years we might just have a Senior Center transit vehicle that just pops around, self-driving.”

Mullin is quick to acknowledge her colleagues for easing her transition into the directorship.

“I’m really fortunate to have an incredible staff here. And some of our volunteers, they may as well be staff,” Mullin said. “I couldn’t have stepped into this role without a whole bunch of people who know everything that’s functioning and are keeping it running. I had a lot of learning to do, but the team has been the ones to teach me.”

When not engaged in her duties as executive director, Mullin tends to her farm with her husband, occasionally launching pumpkins from a trebuchet. The couple has two adult children, Maxwell and Anna.

Future plans for the YSSC include the ongoing reopening process, congregate meals, and a garden party fundraiser on Aug. 7.