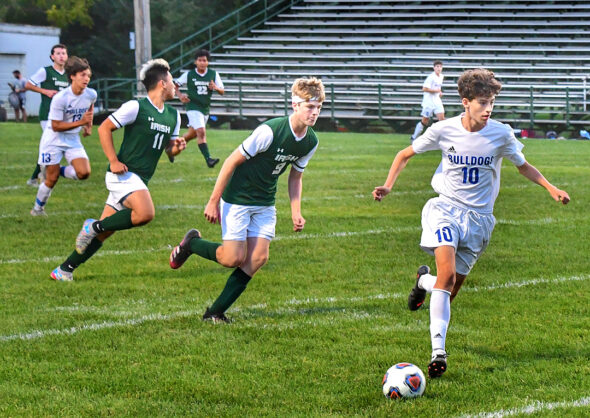 Dylon Mapes, #10, takes the ball down the field as Yellow Springs High School played Catholic Central on Thursday, Sept. 9. The Bulldogs won 2–1 and are currently ranked number two among Division III teams in the state. (Photo by Michael Knemeyer)

“Really well” may be an understatement, as the team has come out on top of every match-up it’s played thus far, including games against larger schools, giving the Bulldogs a 6-0 record after three weeks of competition.

As of Thursday, Sept. 9, Yellow Springs was ranked number two among Division III teams — not only in the area, but also the state. Additionally, the Bulldogs are ranked number 23 among all three divisions in Ohio and number 131 in the nation.

VanAusdal said last week that he hadn’t yet told the team about the impressive rankings, because he didn’t want “to give them a big head” and possibly affect their playing. But word is getting out, and Principal Jack Hatert touted the team’s winning ways at last week’s school board meeting.

“They’re a great example of teamwork,” Hatert said of the squad.

VanAusdal noted that the team is relatively young, with only three seniors. But the young men have been playing together for years, he said, beginning as children in the local recreational program.

“This group is really different from what I’ve had in the past,” the coach said, noting that even the best of teams often have factions within them. But not this group.

“They’re all good friends. They all get along. They work as a unit,” he said.

That unity of purpose shows in their play.

VanAusdal broke down highlights of the individual games:

The opening game Monday, Aug. 23, against Miami Trace, was a shutout, ending 10–0.
“They had a really good team,” the coach said of the school in Washington Court House. “But our boys played so well, it was a pretty uneven game.”

The Bulldogs’ goals were divided among Eli Eyrich, who had four goals and one assist; Luka Sage-Frabotta, with three goals; Dylon Mapes, with one goal and three assists; and Isaac Grushon and Alex VanAusdal, who each earned a goal. Goalkeeper Krishan Miller had one save.

After that heady start, the Bulldogs hosted Waynesville, a Division II team, at home Thursday, Aug. 26.

“Waynesville has a really, really great team,” VanAusdal said. “But our defense was able to contain their best player.” The coach singled out Ben Espinosa as leading the defense’s efforts.

The final score was 2–1, with goals by Mapes and Sage-Frabotta. Goalkeeper Miller had 11 saves, including “a tremendous save that could have tied the game.”

On Thursday, Sept. 2, the Bulldogs went up against Division I powerhouse Wayne High School, besting the undefeated Huber Heights team 5–2.

“It was a really physical game,” ­VanAusdal said. “Our boys were beat-up after. They were able to see that Division I teams are bigger, quicker and much more physical than Division III schools.”

“We knew going into that game that it was going to be a good game.”

The Jamestown team was also undefeated for the season, but the final score was 4-1 in Yellow Springs’ favor.

The win occurred despite a referee giving Ethan Knemeyer a red card, forcing the Bulldogs to continue playing for an hour of the game with one fewer teammate.

“We adjusted very well,” the coach said. “We stayed composed.”

“The referees were also giving a lot of cards,” he noted. “All the years I’ve coached, I’ve never seen so many yellow cards.”

Earning goals for the Bulldogs were Eyrich, with three, and Mapes, with one. Jason Knemeyer and Tallis Onfroy-Curley each logged an assist.

The six games have all been nonconference play. The first conference game is scheduled

The junior varsity team is also starting out well with a record last week of 1–0–0, VanAusdal said, noting that three of their scheduled games had been canceled, two because of weather and one related to COVID affecting the other team.

The coach said he feels the varsity team is hitting its stride.

“I think my boys are really relaxed right now,” he said. They’re working hard, but they’re also having fun. For a small school like this, we’re really doing well. It’s been a little while since we’ve been ranked top two in the area. I’m really pleased with the boys.”