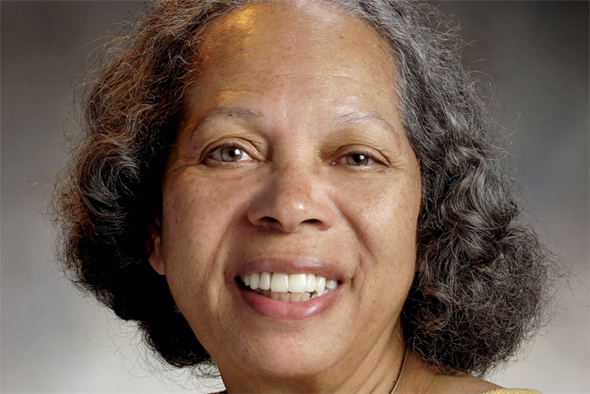 In collaboration with 91.3-FM WYSO’s Eichelberger Center for Community Voices, the News is publishing excerpted transcripts from WYSO’s series “Loud As the Rolling Sea,” which preserves and highlights voices from a generation of African Americans in Yellow Springs who were the civil rights activists of their day.

Community Voices producer Venita Kelly interviewed Yvonne Seon for this series, and it was edited with help from community producer Mary Evans. Historian Kevin McGruder, of Antioch College, hosts the program. The transcript is edited for length and clarity.

To listen to the interview: https://www.wyso.org/local-and-statewide-news/2021-06-23/loud-as-the-rolling-sea-dr-yvonne-seon

Yvonne Seon has had a lifelong career as an activist and scholar. She was first involved in African politics, recruited by Patrice Lumumba, the first prime minister of the Congo, soon after she graduated from college. When she arrived back in the U.S. in the early ’60s, the civil rights movement was at the center of American politics.

She received a master’s degree and a doctorate in Black studies at one of the first programs of its kind at the Union Institute, part of Antioch College. She married Bill Chappelle and the two came to Yellow Springs in 1967. He became a professor at Antioch. She went to work at both Wilberforce and Wright State.

Yvonne Seon: That was my first time living in Yellow Springs, Ohio. I moved right here to Yellow Springs. My former husband had friends who had moved here that he respected a lot and it was an interracial couple. They found that this was an ideal setting. It was a place where they could be comfortable as an interracial couple. And we came and liked the community and liked what we saw here and liked the progressiveness of it and the progressiveness of Antioch. My daughter was born shortly after I got to Yellow Springs and I found it was a wonderful place to raise a child, to raise children. So I was glad to be raising my children here. I left after, before my second child was old enough to really understand this community. But I went back to Washington to live. But it was a time when I did think about the impact of racism on my children.

Venita Kelley: Did Yellow Springs live up to your your impressions before you moved here? And you and your husband, you said it was a wonderful place to raise children. Why was it wonderful in Yellow Springs at that time?

Seon: We were closer to the civil rights movement then. And the people here — like you have that peace movement that meets on the corner every Saturday. Sun, rain, snow, whatever the weather, they are protesting for peace. Well, that was the kind of atmosphere in terms of civil rights. Yellow Springs was a place where it was clear that the populace was in favor of civil rights and they were going to do what they needed to do to get civil rights. They had gone through that experience with the barber shop downtown, and that was over. But I think people, as a result of that, were feeling very much as though civil rights was something we had to do. They were very much active in the civil rights movement, more so than I had been in Africa when they were doing civil rights. So just to say that that was the atmosphere here and Yellow Springs took pride in having that, quote unquote, liberal mindset, and people working together, white and black, working together, and interracial couples working with and being part of the community. And so the kind of hard core racism and segregation that you find in other places, you didn’t find that. You could but you didn’t find it so much here.

Kevin McGruder: Dr. Seon went to work at Wilberforce University at a time of student unrest there and all around the country, and eventually responded to an invitation at Wright State University to create a resource center for African-American students called the Bolinga Center, which she helped name. Bolinga means love in the Lingala language.

Seon: The center was founded by students, a student group who wanted a cultural center for African Americans, which was a small group at Wright State at the time, and they hired me to implement it. So the Bolinga Center is a Black cultural resources center at Wright State University.

Kelley: And you were the founding ­director?

Seon: I was the founding director and it was one of the first of its kind in the ­country.

Kelley: What differences did you see between those two universities once you went from Wilberforce to Wright State?

Seon: That’s an interesting question, and it’s humorous in a way. What’s the difference between Black and white? Wilberforce is a traditionally African-American university. Well, for one thing, the Black students at Wilberforce, they took Black students, no matter what their background was or what level of preparation they had. And so part of the curriculum of Wilberforce included courses that would help get students up to college speed. And that was necessary. At Wright State, they admit all students on the same basis and consequently the students were much better prepared, or at least they had to function immediately and they did not have an immediate set of courses to help them get adjusted. That was the biggest difference. The level of preparedness and the level of expectation in terms of what those students were expected to do. One of the things that I found was that I had to expect more of them at Wilberforce. I had to expect of them that they could do the work. But I found that I also had to teach them to do the work, enabling them to meet those expectations. And that was what happened. There were some brilliant students who were graduating from Wilberforce University during those years and at Wright State, there was no special program for them, but also the expectation of the ability to succeed was much, much lower.

Kelley: And so is that why there was a need for a Bolinga Center at Wright State?

Seon: That’s what the students felt. They felt that there was a need for building a center to deal with conscious awareness, awareness of self, self-confidence, and to understand African culture and to see that in a different light, instead of seeing it as the rest of the community did, as something less than. Their cultural heritage was not slavery. Their cultural heritage was Africa. And I think that was an important part of why we had the center and why it was needed. I remember when we were working together in the fall of 1970 to design the center as it were, we were trying to figure out what was the center going to be, how would it attract people? What would it do? While we were working on that vision, the student newspaper came out and said that they were opposed to a Black cultural center. Why did they need a lounge and white students didn’t have a lounge? Well, they said it was a lounge, and they did not see any purpose in it. They did not understand the vision that we had, something that would put African culture on the map, so to speak, on the radar for Wright State University.

McGruder: Dr. Seon lived in Washington, D.C., for many years with her three children, Felicia, William and Dave Chappelle. But she came back to Yellow Springs several years ago to enjoy being a grandmother.

Seon: I would tell them to stand up for what they believe. I would tell them to never give up, to believe in themselves and believe that they can do whatever it is they set their minds to do. That’s the way that we were taught. And that’s why there’s been a limit to the impact of segregation and racism on me, only because I know who I am. And part of knowing who I am is that part — let me put it another way — that feeling that it’s important to know who you are and know that you can do anything and believe in yourself. That feeling is what led me to go into Black studies, teaching Black studies. And I’m very much convinced that that’s an important part of every student’s education in America, not just Black students. It’s important to them because they need to understand from whence they came and believe in themselves and understand that they have a history that they can be proud of. But for everybody else in America, it’s important for them to understand that there’s a history of African Americans, that it goes beyond slavery, if you will, that is before slavery, and that doesn’t have anything to do with slavery. We come from a land where there is early civilization. The earliest civilizations in the world can come from the continent of Africa. And mathematical geniuses and engineering geniuses and architectural geniuses all came from that area — biology, science of biology and understanding plants and plant life — all of that was part of the continent of Africa before slavery, before Europe was developed, in fact.
So I think it’s important for all of us to study Africa because I think if we are going to overcome the legacy of slavery in America, which has been the denigration of Africa, the denigration of African people, the feeling that African people don’t have anything to offer the world, all those myths that came out of that era after slavery and during segregation and Jim Crow, and even up to now. Everybody needs to have an awareness to overcome that mindset, if America is to overcome that mindset.

Kelley: I think it’s a really wonderful note to end our interview on. And so I do want to thank you, Dr. Yvonne Seon, for contributing your voice to the WYSO Community Voices Oral History Project. I really do appreciate you.

Seon: Thank you very much. You’re welcome. Thank you for having me.