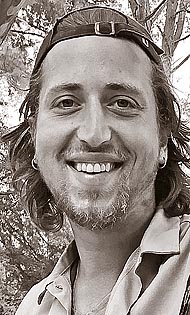 Avram attended Yellow Springs High school. He took classes and was a student worker at both Antioch University Midwest and Miami University. He worked for five years at Siebenthaler’s in Beavercreek as a nurseryman, a job that allowed him to work outside and be among co-workers he considered friends. Siebenthaler’s planted a beautiful Kentucky yellowwood tree in his memory.

Avram was creative and funny and always had a smile to share. He loved walking at the covered bridge; spending time with his dog, Lucy; watching the fish in his aquarium; and sitting on his deck listening to music. Most of all, Avram was kind and gentle and loving.

Avram is survived by his family: Jayne and Stephen Richeson, and his sister, Willow, of Yellow Springs; and Brad and Ashlie Farr, and his twin brothers, Shiloh and Truman, of Centerville. He is also survived by his maternal grandma, Carolyn Wimer; his uncle, aunt and cousins, Todd, Terese, Molly and Mason Wimer; and his paternal grandma, Linda Sheets, all of Kettering.

A small family memorial will be held and a gathering of friends will be communicated via social media, once planned.

The world is a lesser place without your light. You’ll be missed more than you could ever imagine, kiddo.