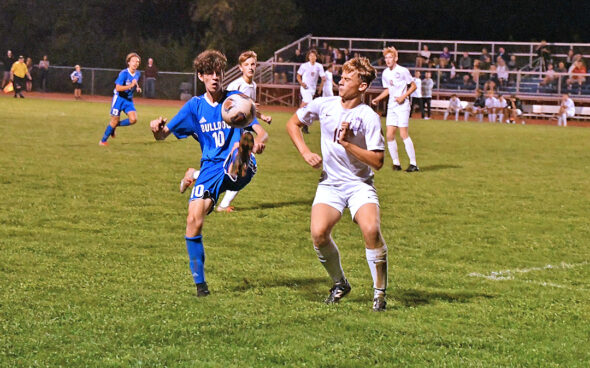 On Tuesday, Oct. 5, the YSHS Boys Soccer team won the Metro Buckeye Conference title when they bested Dayton Christian 4–2 in a home game. Pictured is Dylon Mapes, with Cameron Harris running up in the background. The team, which is seeded at No. 1 among 25 area teams in post-season play, won its first tournament game, 16–0, Tuesday, Oct. 19, against Middletown Madison. They next play Northeastern Saturday, Oct. 23, at 2 p.m., on the home field. (Photo by Michael Kneymeyer)

Ted Horvath ran to a sixth place all-league finish and led the boy’s squad to a third-place effort in the six-team field. He was complemented by team members Kyle Johnston, Will Oberg, Oskar Dennis, Donovan Cooney and Charlie Carr.

Coach Isabelle Dierauer said that the league meet was a reflection of every runners’ hard work during practice, the results of which have been on display all season.

The high school squads return to Cedarville University this Saturday, Oct. 23, to run in the district meet, with the girls toeing the line at noon, and the boys starting at 12:45 p.m.

The results of that meet, as well as Tuesday’s annual Bulldog Invitational at Young’s, will be reported in next week’s round-up.
—John Gudgel, assistant coach

Bulldogs head into playoffs
The Yellow Springs High School volleyball team finished its regular season play with an overall record of 16–2 and a conference record of 8–2, putting the Bulldogs second to undefeated Dayton Christian in the Metro Buckeye League’s seven-team roster.

The playoffs start with the first match against Ansonia on Thursday, Oct. 21, beginning at 7:30 p.m., at Covington High School.

This 2021 Bulldog team has great chemistry, and the players’ commitment to each other has been amazing to watch being manifested on the court.
—Phil Renfro, head coach