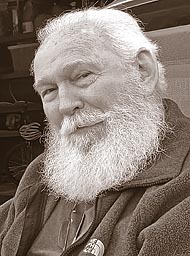 Detlef was born on Jan. 26, 1942 in Munich, Germany and immigrated to the USA in 1948 at the age of 6. His father was a German scientist brought to Wright-Patterson Air Force Base via Project Paperclip, and the family settled in Yellow Springs — one of few communities to welcome Germans after WWII and during the war trials.

Detlef spent his youth playing “cowboys and Indians” in Glen Helen and graduated from Bryan High School in 1960. He discovered a life-long love of soccer playing on the first Bryan High School soccer team and with the Yellow Springs Soccer Club from its beginning in 1970. Soccer was his passion and social outlet, playing into his 70s when his team won the first national soccer tournament for men over 70 years old. He refereed soccer for youth of all ages through high school and was recognized for 40 years of refereeing service by the Ohio High School Athletic Association in 2020. He also taught soccer refereeing classes and mentored hundreds of southwest Ohio referees. He loved helping kids and adults alike have fun playing soccer and left a lasting impact on soccer in the greater Dayton area.

Detlef graduated from Saint Bonaventure University in 1964 and served his country as a teacher of physics in the Peace Corps in the Philippines. Detlef earned a master’s degree at Michigan State and was ABD from the University Chicago, where he also taught physics at the University of Chicago Laboratory School. Detlef moved back to the Dayton area to work as a software engineer at NCR from 1979 to 1995. After NCR left the area, Detlef returned to teaching at Stivers High School and as a regular substitute at the Greene County Career Center. He loved helping students discover the joy of learning and problem-solving.

Detlef’s outgoing personality and his natural long white beard made him a perfect Santa. He volunteered his “Ho Ho Ho” and warmth to children and families as Santa at Friend’s Care Center in Yellow Springs, the City of Kettering, Carillon Park in Dayton and area daycare centers. Playing Santa was a joy for him this time of year!

A dedicated and loving family man, Detlef is survived by his wife, Ann, of 47 years; his two daughters and their spouses, Kjirsten Frank Hoppe (Will) and Nadja Turek (Dr. Steven); and three cherished grandsons, Hans and Ivan Turek and Calvin Hoppe, all of whom live in the Dayton area. Also, three of Detlef’s four siblings survive him: Dr. Helge Frank (Lori), of Downers Grove, Ill.; Marion Heitner (Dr. Alan), of Cincinnati, Ohio; and Gerda Donovan (Tom), of Chula Vista, Calif. Detlef was preceded in death by his brother Rolf D. Frank.

A celebration of Detlef’s life will be planned in the future sometime after the holidays.

Donations can be made to The Glen Helen Association and/or to the Yellow Springs Youth Soccer program.