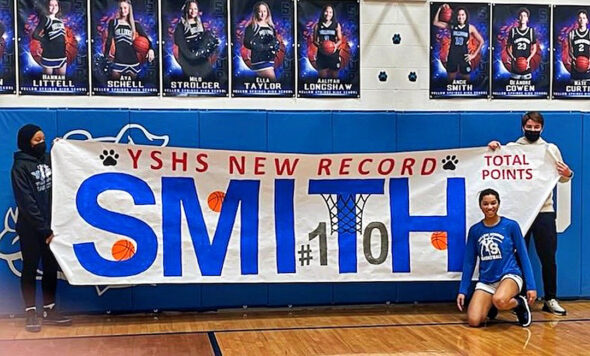 In a YSHS girls varsity basketball game at home on Thursday, Jan. 20, senior Angie Smith surpassed the long-held scoring record of 1,770 career points set by Evin Wimberly in 2005. Smith is pictured above in front of a banner noting her feat. (Photo by Kasey Linkhart)

The layup that put Smith, jersey No. 10, one point over Wimberly’s total also gave her 27 points for the game, which ended with a 60–8 blowout over conference rival Jefferson Township.

The moment came with just seconds left in the third quarter.

Smith told a county sports reporter that she was nervous as she headed toward the hoop, knowing that a successful shot would put her over the top. She said she feared the embarrassment of missing.

After the record-breaking basket, Coach Nick Minnich called a timeout and her teammates swarmed her in celebration, presenting her with a large poster honoring her feat. 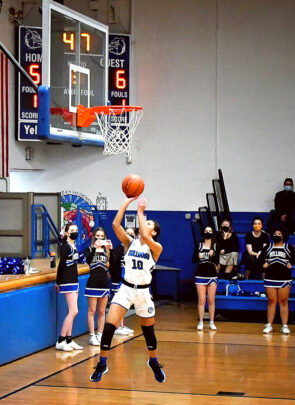 In the two games since, Smith has added 37 more points for a total 1,808 points with two more games scheduled in regular season play. With the Bulldogs currently at the top of their conference, boasting a conference record of 7–0, additional post-season tournament games are likely, and with them would come the opportunity to take the scoring record even higher.

Smith has been heading toward her record-breaking moment since joining the team as a freshman. She surpassed the 1,000-point milestone as a sophomore, and earlier this season topped elder sister Elizabeth Smith’s 1,500-plus record. The only thing slowing her down has been the pandemic, which limited the number of competitive games for the past two seasons.

While a typical season has 23 games, last season ended with 17 and this season has 19.

Her sister, who is five years older, has been her inspiration since Smith was 3 years old and trying to keep up with Elizabeth while playing at a backyard hoop, Smith told the News last year as she eyed the possibility of a 2,000-point career.

According to Metro Buckeye Conference statistics, Smith is averaging 21.9 points a game this season. Her freshman year ended with a 24.5 point per game average; as a sophomore, the average was 21.7; and junior year ended with a 22.9 average.

This year she also leads the conference in assists, revealing an attribute that makes Smith even more of a standout than her accumulation of points.

“She’s so unselfish,” Yellow Springs Athletic Director Jeff Eyrich said of Smith’s inclination to spread the ball — and the glory — around.

He described Smith as a “player coach,” teaching, encouraging and supporting her teammates.

After achieving her new milestone during the Jan. 20 game, Smith spent the last quarter on defense, making space for other Yellow Springs players to take the ball and score. By the end of the game, eight other Bulldogs had put points on the scoreboard.